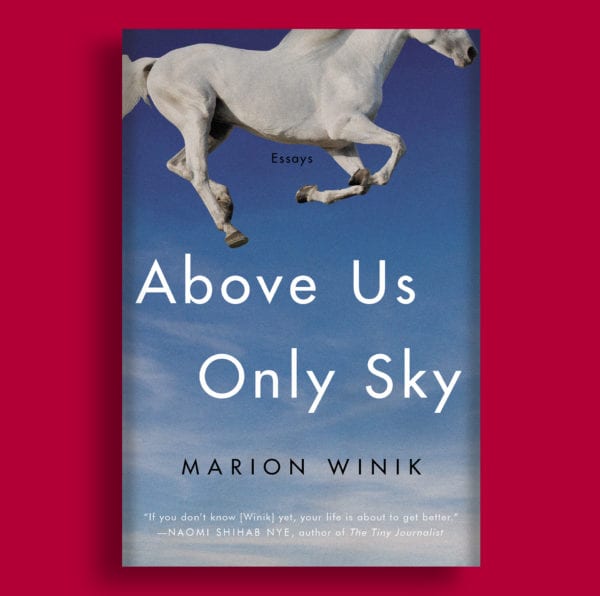 On July 14, 2020, my 2005 collection of essays, Above Us Only Sky, is being reissued by Counterpoint in both paper and digital editions. To the original essays, I’ve added 22 new ones, 17 of them written for this column. That’s why the new edition is dedicated to Baltimore Fishbowl founder and publisher Suzy Dunn – without her support, most of this new work would not exist. And you Fishbowl readers, you too get credit. Some writers produce masterpieces in isolation, but I can’t write 500 words without believing that somebody will read them, and soon.

When I read the draft of the new edition of the book straight through for the first time, it was kind of dizzying.  As a group, the essays document about twenty years of family life, written in real-time as it was happening. In the beginning of the book are essays I wrote when Hayes and Vince were small, my second marriage was new, and Jane was just born. By the end, Jane is off to college and the boys are long since out of the nest. In fact, Vince celebrates his 30th birthday this month, on what would have been his father’s 63rd birthday. Pandemic or no, I must see my boy! I’m hoping to report on the birthdays of summer 2020 in the August column, which I’ll be writing here on the couch, recovering from knee surgery. Maybe it will be in the form of a pantoum, since I’m still on that formal poetry kick. I’m working on the watercolors already.

There are a couple of exceptions to the chronology and parenting-related subject matter of the essays in Above Us Only Sky. One of them is the title essay itself — a brief visit to my early twenties, the year John Lennon died and Reagan was elected. This long piece is one of my favorite things I’ve ever written. It was years in process and at one point was a 300-page-long novel, a very bad one. There’s also “Waiting for Daddy,” which is about my childhood, and “My Famous Family,” which is about my family tree. “The Mad Naked Summer Night” and “Silly Rabbi, Trix are for Yids” are riffs on being hot and being Jewish, respectively, because God knows I’m one hot Jew. “16,409 Easy Steps to Late Life Fitness” is about running, which I haven’t been able to do for many years now, but supposedly could take up again after my knees are replaced. We’ll see. Maybe I’ll also be playing tennis and skiing, but I’ll settle for just walking up and down stairs like a normal person.

I asked Suzy to do me the honor of choosing one of the essays from the new section to run this month, and she picked one that first appeared in the Lives column of the New York Times magazine. “Grand Theft Litho” was written shortly after my mother died in 2008. 2008 was a truly sucky year which also contained the death of my marriage and my 43-year-old friend Laurie Payne and some real-estate-related misfortunes. I remember getting the call from the Times editor while on the beach in New Jersey. I literally jumped for joy.

So far, 2020 has been making a strong bid to join 1982 and 2008 as one of the darkest of my life, and I know I’m hardly alone in that, and I’m also well aware that things could still get a lot worse. The high notes, like the publication of this pretty blue book with the white horse on the cover, and the kids’ birthdays, and a trip to the beach, and the solace I find in reading and writing and drawing and sometimes even teaching, mean so much. And maybe November will bring us a big consolation prize. Here’s hoping.

In case you think your mother’s death is going to put a stop to her always being right about everything and your coming up always just short of the mark, I draw your attention to the Case of the Missing Calder.

During the nine months of my mother’s illness in 2007 and 2008, my sister Nancy and I spent as much time as we had since we were kids in our childhood home, a ranch house in a fifty-year old development in Monmouth County, New Jersey. It was an hour and a half for Nancy from Suffern and three hours for me from Glen Rock, PA, but we came as often as we could. It was surely one of my mother’s last pleasures—as golf, bridge, theater, books, and finally even Jeopardy were taken from her—to see us mutate into The Winik Girls again.

As Nancy and I spelled each other at doctor’s appointments, in the hospital, and at her bedside, our mother gradually turned over to us not just medical and household decisions but the management of the intricate, ruthlessly organized empire we referred to as Jane Winik Incorporated. My C.P.A. sister was appointed treasurer and I, the writer, became secretary. Actually, this division of labor occurred after my approach to record-keeping of bill payments and bank deposits was deemed inadequate.

In general and as always, both of us were killing ourselves to please our mother and we mostly succeeded, but there were a few things she didn’t quite trust us on, and it turned out she was right.

Even before the days of handing over safe deposit box keys and signing powers of attorney, my mother feared that my sister and I did not fully appreciate the value of the small number of artist’s prints and oil paintings she and my late father had collected. For one thing, she knew that this art was not to either of our taste. There was the depressing modernist cityscape, the twirling, Impastoed tango dancers, the “cubist” snow-roofed barn, the obligatory Don Quixote in the powder room. But, she would point out, the Vasarely certainly is worth something! And the Calder!

My mother’s Alexander Calder print, which hung in a place of honor in the living room under its own art lamp, was (as my sister has just read me from the authentication) a red, blue and yellow abstract lithograph titled Caracol, #65 of 75, bought by my parents in 1980. On the day of the home sale at which we hoped to sell my mother’s remaining furniture and possessions (we’d already given 37 bags of perfectly kept, size 6-petite suits, dresses and golf attire to Jewish Child and Family Services), both it and the Vasarely were stowed in my old bedroom with other items not for sale.

The sale was to begin at 9 on a Saturday, and neither my sister nor I made it there in time. When the real estate agent who was selling the house for us got there at 8:30, there were a dozen people waiting and when he unlocked the door they poured in in a frenzy. By the time I arrived at 10:30, my sister was on the front lawn with one of my mother’s lifelong best friends, discussing the theft of the entire set of my grandmother’s silver flatware. (It was in the drawer of a highboy, also not for sale.) I walked in, went straight to the back bedroom and determined that the Calder also was gone.

The rest of the day was a blur. The poor flummoxed real estate agent thought he might have sold a painting tagged at $5 to a blond lady who worked at Home Depot – he had only seen it from the rear, while conducting another transaction. However, when we tracked her down, the blond lady assured us she had purchased the Toulouse-Lautrec knock-off and there had been no Calder in the house by the time she got there. She surely would have known. Meanwhile, she asked, were we definitely not interested in selling the Vasarely?

By this time we felt we loved the obnoxious op-art Vasarely as much as anything we’d ever seen and would no more part with it than we would our own children.

By that time, so much had happened since my mother’s death in April that she would have hated. Some of it was Wall Street’s fault, some of it was the government’s, but some of it, Nancy and I knew, was ours. Of course she would have forgiven us – our mother couldn’t hold a grudge long enough to smoke two cigarettes – but it’s different when you have to imagine your own pardon.

You can buy Above Us Only Sky in all the usual places, but if you’re in Baltimore, I hope you’ll buy it at the Ivy Bookshop. The virtual launch, with an introduction by Kirkus Editor-in-Chief Tom Beer, will be on Tuesday, July 21 at 7 pm, hosted by the Ivy. Event details here.