On East Monument Street, between Luzerne Avenue and Rose Street, is the L Mart where Officer Arthur Williams’ beating of DaShawn McGrier began, and next to it, the marble steps where McGrier fell after being tackled by Williams, and the sidewalk where, his mouth bleeding, his face was pressed into the concrete. Above those steps there is a small sign that couldn’t be seen in that shaky, urgent viral clip, but it reads “Keep Off Steps.”

This strip of Monument Street in East Baltimore is often telling residents what they cannot do in ways big and small. It is a heavily policed, high-crime area and has been for decades, and the result is a neighborhood where police roam looking for trouble.

So last night, at the corner of Monument and Luzerne, McGrier’s family along with Black Leadership Organizing for Change (BLOC) briefly pushed back against all of the ways residents of Monument Street are told “no.”

“Whose streets? Our streets! Whose city? Our city!” Hayes then shouted with other members.

The plan was to move some more people into the street, but there were only a few other takers—this was, it would turn out, less a march or rally than an intimate gathering in which residents, organizers, family and even a few representatives of the Baltimore Police Department came together with competing approaches.

Members of McGrier’s family were there and had called for the gathering with some help from BLOC, a new activist group made up of black organizers formerly involved in Baltimore Bloc.

“The family wanted to express their pain and make sure people don’t forget about DaShawn,” Hayes said. “Because our collective believes in following the direction of the family, we made sure we could do something even if it was small.”

No one from the McGrier family, including his mother, Shonta, spoke last night, though. Then again, maybe there isn’t much to say right now. This latest BPD scandal has played out the way so many others have played out, with a mix of slow change and P.R. savvy: The officer has resigned, though as some have noted, he was given the luxury of resigning rather than being fired (meanwhile the resignation was announced to the public at 11:30 p.m. on a Sunday night), and he faces charges of first- and second-degree assault and misconduct in office (he has pleaded not guilty).

After the six officers charged with Freddie Gray’s death all walked, this does not feel like enough to many.

“What we know to be true is that Baltimore Police Department has a systematic culture issue of preying on, particularly black boys, and I am here to say, ‘No more,'” BLOC’s Tre Murphy said. “We are now calling on the mayor and our elected officials to clearly and adequately address this in a real meaningful way that presents actual justice.”

There have been strong words of condemnation from the police, but there have also been overt attempts to change the narrative. Much has been made of a police report about a previous encounter between the two, in which Williams claimed McGrier threatened to kill him. And at a press conference following Williams’ resignation, Acting Commissioner Gary Tuggle referenced “people in the immediate area and approaching that situation with sticks in their hand,” referring to a man in the video holding a broom who, when the beating began, was sweeping the sidewalk—literally cleaning up his own community.

Commentary like that has moved BLOC to reach out to Mayor Catherine Pugh and the Baltimore City Council–the latter began last week’s Public Safety Committee hearing with harsh words for the officer–rather than the BPD.

“The mayor will receive a letter. Inside, the letter will have six demands around how we can change the toxic culture of BPD, right? Because what we know also is if we leave it up to our elected officials, we’re going to get the same bullshit we have always gotten,” Murphy said.

The six demands presented in the letter are as follows:

“1. Remove the Civilian Review Board (CRB) from the City Solicitor’s Office so it can go back to avoiding a conflict of interest of being placed in a department that would legally represent the Baltimore City Police Department (BPD) and BPD affected residents.

2. Strengthen the CRB, incorporating suggestions from the Community Oversight Task Force created by the Department of Justice recommending a fully independent oversight body with investigatory powers and an adequate budget tied to the BPD’s budget.

3. BPD must cooperate, as required by law, with the Civilian Review Boards and make appropriate Internal Affair records available to CRB investigators and board members.

4. Commitments from City Hall that they will support LEOBR and MPIA reform to ensure police accountability, civilian oversight, and the mandate of the DOJ’s consent decree can be implemented.

5. A clear outline from BPD on its efforts over the next six months to improve community relation.

6. Clarity on what training regarding de-escalation, community policing, and racial equity all police officers on patrol are receiving, and metrics on how effective their implementation actually is.”

The letter also gives a deadline for response: “If we do not hear from you by 5 p.m. on Friday August 24th, 2018 you can expect that we will organize in the spirit of our civil rights ancestors and demand accountability as is our right as residents of Baltimore City.”

Members of BLOC, including Hayes and Murphy, were previously involved in 2015’s City Hall sit-in, which provided a series of demands for how police should handle protesters and then occupied City Hall when those demands were not responded to in a way that was satisfactory to the group.

Neither Mayor Pugh nor BPD responded to a request for comment about the letter.

Also present last night was Amy Cruice, a legal program manager for the ACLU of Maryland who is also the civil rights organization’s representative on the Civilian Review Board. The ACLU of Maryland has stressed that McGrier was beaten “for simply asking why he should show his ID,” which connects to a larger issue of BPD violating rights and targeting residents.

McGrier’s attorney, Warren Brown, revealed that Williams and McGrier had a history— there is video of a previous encounter in June in which Williams is on top of McGrier pushing him into the ground. This vein of over-the-top officers harboring a history with residents recalls East Side cop and Gun Trace Task Force member Daniel Hersl’s years of interaction with rapper Young Moose, also on Monument Street, and police initiatives like the Monument Street Initiative, which intensely focuses on that area.

There is a telling ABC 2 report from 2013 about the Monument Street Initiative. In it, reporter Brian Kuebler rides along with officers from the initiative, calls Monument Street “the root”–or “the route”–“of East Baltimore’s evil,” and casually portrays cops stopping residents because they “recognize” them and for hanging out and refers to these as “innocent stops.” We see BPD writing down the information of people they stop or, as the report says, “keeping tabs on who belongs in these neighborhoods and who doesn’t.”

Officer Williams was working as part of a “cross-border” initiative between two districts on Saturday, Aug. 11, when he went after the 26-year-old McGrier.

Hovering around the perimeter of the protest last night were BPD chaplains and Rev. James W. McEachin Jr., of Corner Rock Ministries in West Baltimore. Eventually, McEachin approached the family and asked if he could lead everybody in a prayer. The McGrier family obliged.

“It can be corrected if we are connected,” McEachin said. “Baltimore city needs to be baptized.”

After his prayer and a group “Amen,” the chaplains, whose presence after the uprising was wide but has diminished since then, spoke with BLOC’s Hayes and others about how they could help and assist. Mostly, the conversation had to do with how infrequently the chaplains are out in the community.

“Black lives, they matter here,” Murphy soon yelled to the group starting up another chant, keeping the evening’s energy up.

“We’re just gonna let that one slide,” Murphy said of the “all lives matter” shouts coming from the group of older, black chaplains, and then asked if anybody else would like to speak.

Rev. C.D. Witherspoon of the People’s Power Assembly walked into the street and countered McEachin’s demands to pray by paraphrasing a quote attributed to Frederick Douglass (“I prayed for freedom for 20 years, but received no answer until I prayed with my legs”) and commented on a lack of accountability by police.

“You are right to be angry, you are right to want change. We don’t want another police commissioner, we want justice. We want officers fired, we don’t want any more paid vacation at the taxpayer’s expense,” Witherspoon said. “That young black man who’s driving in his car in the middle of the night—he’s just as afraid of the gangs as he is of the police.”

The crowd clapped and then Murphy joked that the 9-year-old made more sense than any of the people in charge of Baltimore right now. 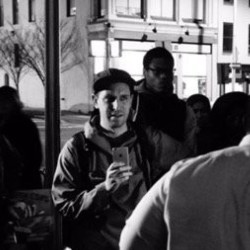