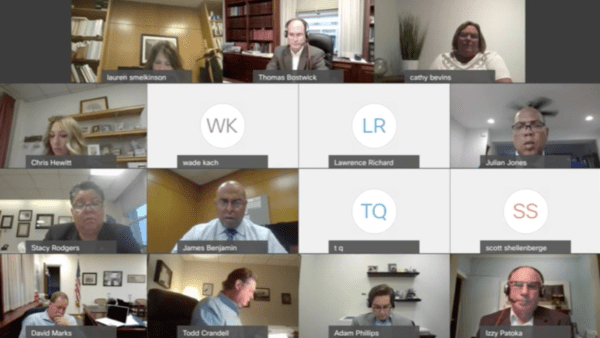 The Baltimore County Council is voting on a bill Monday evening that aims to protect tenants from eviction during the pandemic. The bill consists of regulations on sudden residential rent increases.

“The issue I’m bringing forward today relates to an economic and health crisis,” he said at the session.

The bill has since undergone several amendments.

The latest draft requires landlords to give tenants 60 days’ notice before increasing rent during a national or statewide eviction moratorium that lasts more than 30 days, or as long as the governor declares COVID-19 a catastrophic health emergency.

The restriction would last 90 days after the emergency.

Patoka said giving tenants time after the emergency is critical for families to get back on their feet.

“When the economic crisis ends and you’ve lost your job doesn’t mean you immediately get a job,” he said.

The bill would bar landlords from charging, collecting or demanding any late fees from tenants if they provide written or electronic proof that they cannot pay because of the emergency.

During the work session, Council Chairwoman Cathy Bevins questioned whether the government should be able to regulate rent prices.

“We can’t do that. We can’t go into private sector and tell them what to charge or tell them to bring their prices down,” Bevins said.

Patoka replied that a crisis like COVID-19 demands special protections.

“The profound impact of this virus is different than anything that we have seen in generations,” he said. “For me, I feel it as an obligation right here in my heart, Madam Chair, to help the families in the second district.”

In an interview with WYPR, Patoka said that he made several amendments in response to concerns raised during the work session. The new version’s definition of “emergency” is more specific to COVID-19.

In addition, the bill originally said that during the 180 days after the emergency, landlords had to give written notice to their tenants 60 days before demanding rent increases or late fees.