Baltimore writer and 2013 UB grad Nathan Dennies mourns the passing of his and his fiancée’s falling-apart first bed, as broken down as it was (on a nightly basis).

I salvaged the components of my old bed from the Copycat Building loading dock. I lived in that dilapidated, lead-paint filled warehouse for six months and saw the loading dock as a treasure trove. It was the area right by the dumpster where every starry-eyed hipster leaves behind what they can’t fit in the back of their Subaru. If you could handle the smell of stale beer, the loading dock provided nearly endless rummaging possibilities. I found all the art history textbooks I could ever need and began a VHS collection despite not owning a VCR or television. I even found a Burberry umbrella that I totally thought was real until a friend pointed out that Burberry isn’t spelled with two U’s. It was there amongst the crushed beer cans and trampled fabric that I found the pieces of my bed.

On day one I discovered my blue queen-sized mattress with embroidered pink flowers. A bit of yellow foam protruded out the end, but it was manageable. Day three I scored my blackened queen-sized box spring. Day three was a great day. Finally, on day six I found another queen-sized mattress. Unfortunately, this one was white, which wasn’t the best color for the mélange of stains covering it. I didn’t bother to clean the mattresses or check for bedbugs; instead I went to Target and bought some red bed sheets to cover everything up.

The final result was a sad lump of mattresses that took up most of the space in my tiny room with its thin plywood walls. It was like sleeping on Jell-O, wobbling and shifting through the middle of the night. My five years living in California couldn’t prepare me for the tectonic disaster I experienced on a nightly basis. I’d have to get up and fix it or else risk tipping over onto the floor. I was ecstatic when I moved in with my fiancée, Ellen, and joined her in a bottom-of-the-line IKEA bed. It was only a full-sized bed, but it was cozy having her so close to me. I left the old bed on the loading dock alongside my VHS collection.

In the beginning the IKEA bed was great. Sex was better if only because it didn’t feel like we were doing it in the bounce house at Chuck E. Cheese. We ate in bed; drank in bed; I even proposed in bed. What we didn’t realize was that the bed was slowly splintering beneath us.

You see, there’s a reason why this bed cost only 50 dollars. The combination of shoddy materials and our poor DIY skills was a disaster in the making. The flimsy wooden frame was coming apart and making it so the ladder of wooden beams that supported the bed no longer reached across the frame. Our feet would dip down slightly at the end of the bed, which I eventually decided was a comfortable new orthopedic feature. Sex and sleep were still fine, and we got used to the jolt of a few beams falling off now and then. As the weeks went by, the bed frame got worse, progressively taking with it more of the beams. We started having to get out of bed to slam the frame back together and reset the beam ladder every couple of days. It became routine, and we rotated on bed-fixing duty. Ellen was better at it than me and would usually have to fix my mistakes. We tried some repairs, but no amount duct tape could keep the back corner latched together.

Our living situation was deteriorating, but we tried our best to cope. We kept telling ourselves that in a few months we would escape the cold basement, get a place of our own, and start living like a normal engaged couple. We weren’t allowed to cook bacon anymore because our neurotic roommate didn’t like the smell. Meanwhile, he would be in his room smoking cigarettes and listening to screechy noise music at maximum volume. It was excruciating.

It soon got to the point where we stopped going upstairs if we could avoid it, and every day the bed collapsed. It wasn’t just one or two beams; it was whole thing all at once, like being rocked by a violent earthquake. Every effort to get in or out of the bed became a frightening and cautious effort. If I managed to make it into bed without breaking it, the trick was to stay perfectly still for the rest of the night. Any quick movement or jolt resulted in a complete collapse and a bruised ass.

Ellen was taking it worse than me. She couldn’t handle coming home from a boss that yelled at her all day to not being able to relax in her own house. She would shut down and ball up on the safe corner of the bed. It was becoming hopeless and our love life was suffering. Sex was like playing a life-sized version of Don’t Break the Ice. If we had the willpower and agility we could push through, but as soon as we finished one of us was on our knees gathering the disjointed beams and putting the bed back together.

The bed broke past the point of no return the other day. The middle beam split down the middle, making it impossible to put back together. Destroying it was a liberating experience. For months we had acquiesced to this object, this thing that reinforced the unworthy, scummy image we had of ourselves. Now we’re sleeping on a single mattress on the floor and feel calmer than we have felt in months. We’re moving out in a month, although we’ll still be living in someone else’s basement. Still, I can’t help feeling like we’ve downgraded. I never realized how good I had it sleeping on that gelatinous mountain of mattresses.

The IKEA bed was the FJELLSE model. Don’t buy it.

Nathan lives with his wife in Baltimore and still doesn’t have a real bed. He is currently writing his first novel and working with Baltimore Heritage on a walking tour of Hampden. 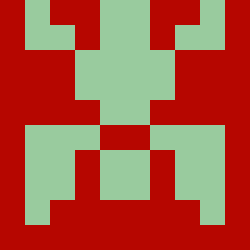