Brittany Oliver remembers the first time she felt unsafe as a young woman in public. A college student, she was riding the bus, when a man came and sat right next to her despite plenty of empty seats all around. He kept asking her what her name was. She didn’t respond. “And so he said, ‘You can’t talk? You can’t speak?’” she recalls. “And I just froze.”

He kept pushing until she got up and moved closer to the bus driver, so she could be near another person in case he tried anything else. “It made me feel like riding the bus wasn’t for me, wasn’t something that I could do,” she says.

There were other incidents, too—in fact, she lists them: “men felt like it was okay to invade my personal space, constantly pestering me…calling out slurs, calling me bitch if I didn’t respond”—that got her thinking about the behaviors women are subjected to in public.

“The problem with street harassment is it’s involved in a cycle where if it’s okay on the street, then this kind of behavior is also happening behind closed doors, in workspaces, in [activist] movement spaces,” Oliver says. “It’s all connected, it’s all linked. And it all perpetuates rape culture.”

In college, Oliver got involved with feminist organizing and activism, and eventually became the co-director of Hollaback! Baltimore, a chapter of the national organization that fights street harassment.

Last summer, Oliver founded Not Without Black Women (NWBW), which she describes as both a social and political movement that amplifies the voices of black women and girls.

Healing and its multifarious forms are folded into NWBW’s ethos. Black women are expected to be “knee deep in the work” of dismantling oppression without pause, Oliver says. “We’re not supposed to put ourselves first; we have to put family first, men first, kids first.”

Oliver says the work she does heals her. Mentoring girls every week at the Crispus Attucks Recreation Center in Baltimore’s Madison Park neighborhood, Oliver and her volunteers play games, dance and eat snacks with the girls. She wants to build up trust with the girls, who range in age from 9 to 15, so that they can also have conversations about consent and rape culture. “It’s very sensitive,” she adds. “They’re not having these conversations at home with their parents.”

A common thread in Oliver’s organizing has been uprooting the stigma of sexual violence within black communities. “I’ve had men of my own race say, ‘That’s not an issue, that’s a white women’s issue,’” Oliver says.

African-American women experience sexual violence at a rate 35 percent higher than that of white women, according to the Bureau of Justice Statistics. The statistical likelihood of sexual violence increases for those who are poor, transgender and/or who struggle with mental illness. “Rape and sexual assault date all the way back to slavery,” Oliver says. “We’re still grappling with that trauma.”

That civil rights activist Tarana Burke, a now-prominent figure who was credited with starting the #MeToo movement (before it became a hashtag) 10 years ago, is a black woman could help upset the thinking that black women are invulnerable to these issues.

“Despite its challenges I’m glad [#MeToo] happened because it gave women an opportunity to really come out about their experiences,” Oliver says. “Black women and women of color have been talking about these types of issues for decades and it takes a lot longer for society to take our issues seriously.”

She continues: “We do a disservice to ourselves and to our communities and society as a whole when we don’t recognize the intersections” of being both black and a woman, for example.

“When you have men of color, black men who have perpetuated sexual violence, the response is it’s not their fault, we’re being too hard on them, the system is oppressive and all this other stuff,” Oliver continues. “I understand where it comes from. That’s still not an excuse to not address these issues in our own communities. You can’t call for accountability and then also not want to have that same accountability amongst each other.”

It can be dangerous for women to come forward about their abuse without community support. “Black women don’t report, we don’t come forward because we’re worried about what will happen to us when we do,” Oliver says.

Fighting back is going to require tough conversations and seeing the “humanity in each other,” Oliver says. And part of recognizing that humanity is meeting people where they are. “People have different understandings about how systems work, especially how they work to oppress us,” she says. “What I like to do is just start at the beginning and just talk about the basics: How do sexism and racism intersect with each other? What are the consequences of us not addressing these issues?”

That’s why she keeps moving forward and working with other black women. As women, “our leadership style is just very different,” she says. “I don’t want power over anyone—I want power with people.” 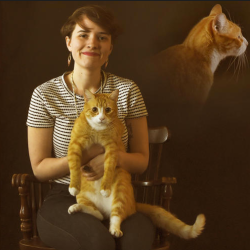