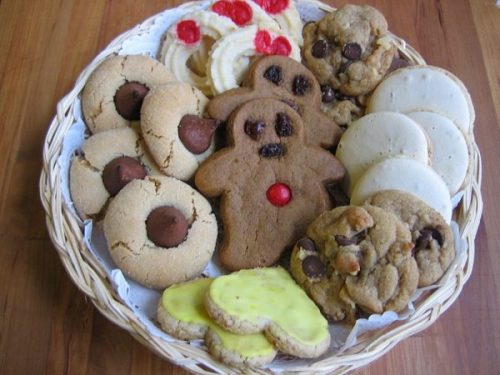 The holiday season gives domestic divas plenty of opportunities to strut their stuff. They operate in an arena in which I’ve never even attempted to compete.

Case in point:  It was 5:00 pm last Friday night, and I was strolling the aisles of the grocery store, maneuvering through the baking goods aisle while tossing into my overflowing cart containers of red and green sprinkles for the sugar cookies I planned to bring to my neighbor’s annual cookie swap. Start time? Two hours.

By the time I got home, dragged in and put away all the groceries, figured out who was chauffeuring which kids where that evening, and considered but quickly dismissed making dinner in favor of ordering a pizza, I was much more motivated to pour myself a glass of wine than to make Christmas cookies.

Reluctantly, I decided to do both, reaching for a bottle of chardonnay while dutifully rolling up my sleeves and digging around for my cooking bowl in the jumble of pots and pans in my kitchen cabinet. In mere minutes, I’d whipped up the batter and was feeling rather pleased with myself for not having had to substitute or simply do without any ingredients (an all too common plight I face in the kitchen) when I got to the next step in the recipe. It stopped me in my tracks. Chill cookie dough for two hours, it read. Well, I don’t have time for that, I thought. Nor was there room in my refrigerator.

Instead, I stuck the dough-filled bowl out in the cold December air for a few minutes then, after retrieving it, plopped the ball of dough onto my flour-covered stove to roll it out, failing to realize the effect of the oven—directly beneath the stove—which was pre-heating.

In no time, my semi-chilled dough morphed into a warm, gooey mess. At this point, I decided to pour myself another glass of wine. Then, rummaging through my kitchen cabinet, I could find no cookie-cutter tree or reindeer shapes—does that count as a missing ingredient?—so I simply scooped up bits of dough with a spoon, transferred them to the cookie pan, and ferociously shook the green and red sprinkles over the whole mess.

As I was frantically shoving my unbaked cookies into the oven, my 13-year-old daughter looked over my shoulder. Glancing at the cookies, she casually remarked: “Mom, those cookies are way too close to each other. They’re going to be one big blob when they’re done.”

Darn if she wasn’t right.

For the next batch, I tried to reign in my impatience, scooping teaspoon-sized cookies onto the cookie sheet and running upstairs to get dressed while they cooked. Pulling them from the oven just before they burned, I gave them a quick and honest assessment: They looked like something a bunch of kindergartners would make. And everyone at this party knew I had no kindergarteners in the house. Nor do I teach kindergarten. Lord knows that would be a disaster.

So I had no excuse for the finished product—not one that anyone would care to hear, anyway: Work is crazy, I’ve never taken to baking….blah, blah, blah. But I wrapped up my sorry excuse for Christmas cookies anyway. At my neighbor’s house, I slid them onto the table stealth-like and quickly walked into another room.

Eyeballing the crowded display of cookies a little later, I stood, slack-jawed. Surrounding my shapeless cookies that looked like the after-effects of toddlers pretend baking with play dough were trays of painstakingly prepared, magazine-beautiful cookies. The chocolate icing on a batch of miniature fudge-like cookies created a wonderfully smooth sheen. Dainty Russian tea balls formed perfect circles. Feathery thin snowflake cookies looked as if they were light enough to drop daintily from the sky. I moved to another room, fast.

The following day, when I plodded downstairs in the morning to make breakfast, my son asked me if he could eat Christmas cookies for breakfast—the ones from the first batch—the really big mess-ups that I’d left at home. Sure, I told him. Have at it.

I peered into the cookie tin and noticed there were only a few left. Then I turned to my son, who was wearing a sheepish grin, and I knew immediately he’d spent most of his Friday night while I was out munching on the batch of flawed cookies.

“Mom, those were the best cookies you’ve ever made,” he said earnestly. And just like that, an 11-year-old temporarily elevated my status to domestic diva.

This story was originally published on December 9, 2013.