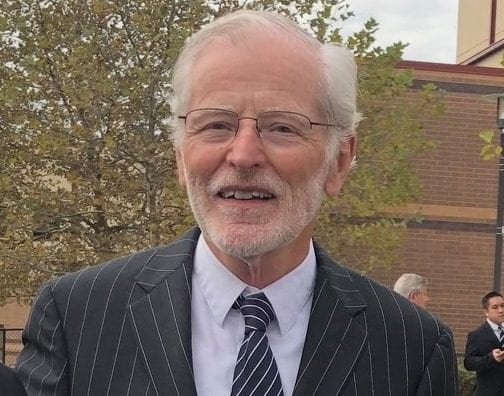 The second in a series of questionnaires answered by candidates for the Democratic nomination for mayor.

Sean Gresh has worked as a speechwriter for executives at several companies, including Honeywell, IBM and Digital Equipment Corporation. He has also taught communication at Northeastern University and Boston College. Gresh has written two books, “Becoming a father: A handbook for expectant fathers”​ and “Tell it like it is: Straight talk about sex.” He was also elected twice as a member of the school committee in Ipswich, Massachusetts.

Many of my answers below pertain to solutions that would address rebuilding businesses and training workers and developing economic opportunities for citizens.

But immediately, we need a concerted effort–a blitz, really–involving the mayor and both public and private sector leaders working with the federal government and the state government to get the resources needed to get people back on their feet.

Because it would involve me as mayor using my bully pulpit to unrelentingly bring opposing forces together–police union, commissioner, mayor, city council and other entities, including members of the community and especially representatives who have suffered the most because of murders taking place in their neighborhoods–my emphasis would be on planning and not just on plans.

The majority of all Baltimore’s murders, those murdered and those who are the murderers, are brown and black men who, through the benign neglect of city council members and most, but not all, of the former city mayors have been neglected. They are part of a lost generation. Their murders fit into my understanding of hate crimes–not crimes just because of race–but the expression of hatred toward others in gangs, dealing in drugs, etc.

Sadly, the majority of Baltimoreans don’t value the lives of these people. We all should. And over the past 10 years, 3,000 persons have been murdered, an estimated 7,000 have been injured by firearms. If these murders occurred in one year, there’d be a revolution and we’d start to see changes. 20,000 to 30,000 or more Baltimoreans have been touched, directly or indirectly, by these murders and injuries.

If you consider the toll the murders have taken on the communities affected, especially the thousands and thousands of innocent children traumatized, the overall condition of specific neighborhoods in Baltimore are suffering deeply. Long ago there should have been such an outcry that a revolution should have occurred to start paying attention and serving better the forgotten generations affected.

What hasn’t been tried in Baltimore is getting leaders heads out of the sand and start recognizing we cannot reduce crime with feeble solutions but only with bold thinking that involves working with and getting the outside world (federal, state, local, private sector, municipal bonds, etc.) investing in Baltimore’s infrastructure.

The mayor needs to be a visionary–practical, fearless and ruthlessly focused on bold solutions and be able to motivate and inspire the pubic to get behind what will require sacrifice, patience, and success via incremental steps the public will be able to see and celebrate.

Absolute failure. Period. And there should an uprising on the part of citizens to insist that the leader who will be voted mayor uses his or her bully pulpit to inspire and bring people together to work together. See my answer above for more details.

I must add that the solution has to involve tens and tens of thousands of citizens across Baltimore–black, brown, white, everyone. As long as the murders take place in the two or so ZIP codes and not in the more affluent sections of Baltimore, there won’t be the outcry that there should be. This has to change and now.

Transportation is vital for the revitalization of Baltimore. A regional authority would be a good beginning. Another is to put pressure back on the powers-that-be to get the high-speed rail link launched.

But we can’t do any of this alone.

We need the support of the state and the region. I am a strong advocate of a regional transportation system. The counties surrounding Baltimore benefit greatly via the tens of thousands who work in the city.

We need to call a major summit meeting to bring all the forces or stakeholders together to plan how we can immediately start serving the needs of the public better.

This would include re-visiting the extension of the Link system to better serve poorer sections of the city. It also involves working in a larger setting with public and private sectors to get the high speed rail system joining D.C. with Baltimore. Finally, for starters we need to either extend the Circulator system to help regions within West and East Baltimore to be better served or we need to explore making bus service free for those living poorer areas.

We ought to explore how several shopping areas – we don’t have enough, for sure – can join together and offer free travel service on a beta test basis at first to get poorer residents to food centers.

Another idea might to bring together volunteer organizations, such as churches, to look at the transportation problems and come up with stop-gap measures until we can get the larger region to get its collective act together.

And we need to continue the work we’ve done on bicycle lanes. I am a cyclist and travel almost exclusively by bicycle. If we had more bicycle lanes, we would have more people using them.

There needs to be an alternative to help squeegee workers get trained and get jobs. Start this way:

Enforce whatever laws the City Council passed a decade or so ago.

If it is illegal to solicit work in the center of traffic, the police should remove those breaking the law.

If there is a public outcry against enforcing the law, then the city council should step up to the plate and (a) change the law or, better yet (b) create an alternative for the squeegee workers to be trained and earn money legally

Pressure the City Council to do something and not allow the dangerous practice to exist. It’s not fair to the so-called squeegee workers.

I would create an Office of Innovation and Collaboration to bring the public and private sectors to start coming up answer to solve intractable problems. This is one of them and it centers on training and job development.

Candidate did not answer this question.

The city of Baltimore should be deeply concerned. I would start by evaluating the work being done by economic development staff members, identify needs, and re-build that organization and put a full-court press, so to speak, on identifying and enticing large companies to set up their headquarters here.

I see the role of mayor as the chief salesperson for Baltimore. We need someone who can speak comfortably with CEOs as well as average workers. I’ve been fortunate to have worked hand in glove with CEOs of some of the country’s largest corporations as a speechwriter for Honeywell, Digital Equipment Corporation and IBM.

9. A bill to build new facilities at Pimlico Race Course and Laurel Park recently became law. Aside from keeping the Preakness Stakes in Baltimore, what, if anything, should the city push for when the new penal code is being developed?

In view of the crisis we’re facing, we might want to hold off on the bill that supports Pimlico. You will get a very different response if you questioned what I refer to as Baltimore’s Forgotten Majority, a hundred thousand or more people who are poor, who have given up on politics, and who need our support now more than ever. The money being spent on Pimlico could wait while we address the needs of Baltimore’s Forgotten Majority.

10. We just passed the five-year anniversary of the Baltimore Uprising. What lessons did you learn from that?

I would start by asking what we haven’t learned and here are just a few answers to my question:

We have not learned that Baltimore’s Forgotten Majority need to be paid attention to and served better. A strong minority were enraged and rioted. There are no excuses for this. But this outburst spoke to Baltimore loud and clear and the rioting reflected how more than just the rioters felt about how black and brown people have been treated.

After campaigning in the toughest and poorest neighborhoods of Baltimore, I believe there is a continued frustration and anger demonstrated 5 years ago that has not been addressed.

We have not learned that to solve the most intractable problems–poverty, unemployment, drug addiction, to name a few–we have to develop huge initiatives in areas ranging from training, the total re-vamping of how schools are run to job growth, transportation, and providing Internet access to all those in Baltimore. This list goes on and on.

We need a master plan for the city that involves addressing Baltimore’s Forgotten Majority and then we need to start planning (again, real planning versus just plans) to start re-building the city step by step.