Workers spent the weekend clearing out and hauling away the contents of Grand Central nightclub in Mount Vernon, one of the many local bars and restaurants that have closed during the COVID-19 pandemic.

The activity is a sign that development group Landmark Partners is getting ready to begin construction of an eight-story office building that will incorporate the historic fronts of 1001 and 1003 N. Charles Street, with new construction behind.

Old credit card receipts and other paperwork fluttered down the street as two workers put some of the building’s contents outside the club’s front window and filled a truck with sound equipment and other items they wanted to keep.

“Take whatever you want” on the sidewalk, one of the workers, Gary Grant, offered to people passing by on Saturday night. Among the discarded items were an office chair, a mirror and pillows from the disco side of the club. 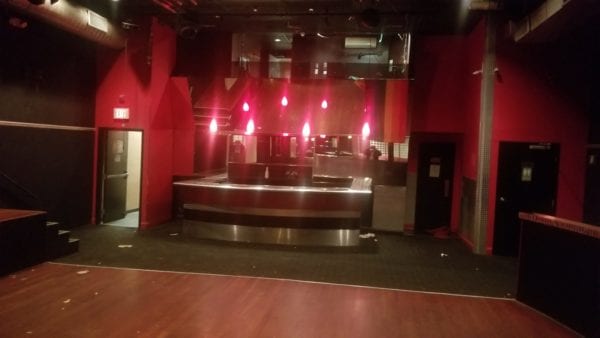 Some people peeked in the open entrance to see the shelves behind the main bar empty of liquor and all the bar stools and tables missing. The wooden bar remained. Upstairs, one of the back walls had nothing on it but dangling wires after whatever had been plugged in was removed.

Grant said Grand Central is the 27th bar, restaurant or nightclub that he has cleared out between Harrisburg and Washington, D.C. since the pandemic took hold in March and public health officials closed businesses or limited operating hours to prevent the spread of the coronavirus.

Opened in 1991 by entrepreneur Don Davis and sold to Landmark for $1.4 million in 2019, Grand Central was the largest gay bar in Mount Vernon and one of the largest in the city.

The business was closed in March during the state’s lockdown of businesses and then it partially reopened over the summer to serve customers with mixed drinks-to-go and packaged goods.

In July, Grand Central was cited for violating a mayor’s executive order prohibiting indoor service during the pandemic, after inspectors, tipped off by a 311 caller, observed more than a dozen people inside.

On September 3, an attorney for license holders George Watson and Jonathan Richard Pannoni of Landmark Partners told the liquor board during a virtual hearing that they would close the club immediately to prevent any further violations.

Stephan Fogleman, the attorney, told the liquor board that Landmark planned to begin construction in several weeks and would have been closing Grand Central permanently anyway. He said the club was living on “borrowed time.”

Landmark’s schedule calls for the construction of its project, City House Charles, to begin this fall and take about a year to 18 months to complete.