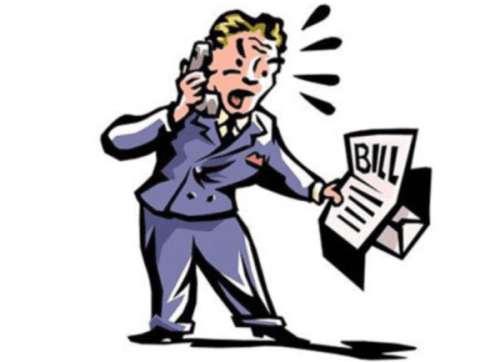 Seventeen years after Maryland’s energy markets were deregulated, most residential consumers who switched their electricity supplier continue to pay a hefty price premium. Many of the 450,000 switchers would have paid less just sticking with their local utility electricity offering — $50 million less in 2016 alone.

Often enticed by savings, 21 percent of Maryland’s residential accounts had switched electricity suppliers in 2016. Last year, these so-called switchers overpaid by $120 on average, or 10 percent more than if they hadn’t switched. (That figures excludes energy suppliers who only sell renewable energy plans and often charge a premium for clean energy.)

On a positive note, Maryland’s two largest suppliers, Constellation and WGL Energy, matched 2016 standard electricity rates. The firms, with a 39 percent market share, offer fixed-rate plans only which can include clean energy products.

However, the consumer bottomline is that a confusing marketplace that allows tricky, yet legal variable rates left the door open for suppliers to overcharge consumers.

Joining the deregulation wave rolling across the U.S. in the 1990s, Maryland passed the Electric Customer Choice and Competition Act of 1999. Legislators bet that allowing multiple electricity suppliers into a market would spark pricing competition.

Unfortunately, the rates that suppliers can charge for their electricity is not regulated at all.

The deregulation law has a major flaw in that there are no rules or guidelines that apply to what suppliers can and can’t charge.

Maryland’s Public Service Commission (PSC) regulates electricity suppliers. Because of the sky-high variable rates that consumers were charged during the wacky 2014 “polar vortex,” the PSC completed an extensive rule making effort in 2016 known as RM54.

But the rule didn’t have sharp enough teeth to keep suppliers from charging any rate the market will bear.

Suppliers can charge variable month-to-month rates. In Maryland it’s okay for suppliers to create minimum usage plans and term them “budget billing.” And, suppliers legally are allowed to automatically renew accounts from fixed-rates to variable-rate plans when their contract ends if customers don’t opt out and actively choose a plan.

This may explain the chart below illustrating that 50 percent of households that switched electricity suppliers paid on average at least 10 percent over the “standard offer service (SOS)” rate. S.O.S. is code for BGE’s kilowatt price if you don’t switch, the do-nothing price. 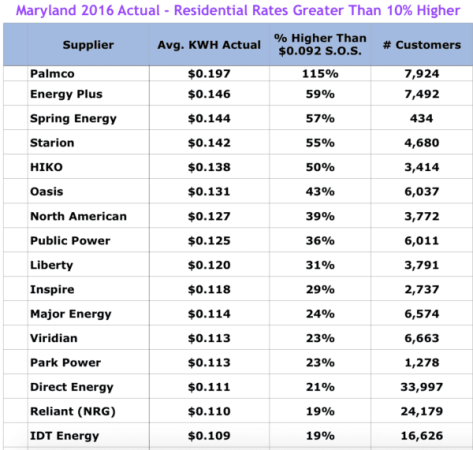 Only two pricing-related rules came out of RM54: Maryland’s consumers must be notified by suppliers in writing if their rate will increase more than 30 percent in one month. And, suppliers must make available the variable rate customers will be charged for the next billing cycle, yet few do.

A “weather vortex” situation can easily happen again, as tens of thousands of residential accounts are on variable pricing. And most have no idea. Everyone should know the information printed in the “green box” below found on every BGE invoice.

Why are people paying more for energy when they switch?

How does inflated supplier pricing affect low-income accounts that participate in the Electric Universal Service Program, or for folks assisted by the nonprofit Fuel Fund? To what extent are federal taxpayer dollars helping to pay low-income accounts with potentially inflated rates? Is limited emergency assistance money being diverted from paying low-income bills to paying a supplier’s higher variable rate? Three days this November, two representatives from a supplier included on the chart above, set up shop across the street from Paul’s Place Outreach in Washington Village/Pigtown. The reps offered a $250 bill credit to folks who enrolled.

What’s a Consumer To Do? How do you tell if your account is on variable pricing? How do you compare prices? Do you understand your pricing plan and contract length? Are you paying more for nothing?

The good news is that Maryland’s energy choice system does offer the chance to choose a smart supplier plan. For consumers who are informed and organized, economical fixed-rate plans for renewable, conventional electricity and/or reward pricing exist.

The bad news is that the onus for a smart electricity supplier decision — for any household type at any income level — rests squarely on your shoulders, for now at least.

Reach out to laurel@baltimorefishbowl.com and we’ll make sure our upcoming guide makes it into your inbox.