After the Baltimore Uprising in 2015, retired Ravens linebacker Ray Lewis and his friends Rob D. Wallace and Cherie Brooks put their heads together. Their goal was to pursue a project that could reignite hope, faith and pride in their community. They soon realized any solution had to focus on creating jobs for the city.

By tapping into Maryland’s clean energy revolution and capitalizing on the three co-founders’ strengths, Power52 Foundation — and its sister company, Power52 Energy Solutions — was born.

Power52 develops large-scale solar installations. Over a decade, co-founder Rob D. Wallace has helped to install over 100 megawatts of solar in the Mid-Atlantic and in Africa. Because Maryland is a solar-friendly state, Power52 can build out industrial-scale projects that also provide excellent opportunities for job creation.

After joining Power52 in October for the nonprofit’s second training class at its huge Nixon Farm solar project in West Friendship, I saw that its staff have succeeded at developing a scalable model for generating local renewable energy that will also help renew people and communities.

‘You’re on the Cusp of the Third Industrial Revolution’

“This solar training program will launch your careers for the rest of your life,” said Ray Wallace to the class of solar students. “Our world is entering the third industrial revolution in sustainable energy. The future is solar, battery power and storage, and you’re on the cusp of this revolution. Learn everything and then get out there and travel.”

As we have reported, Maryland’s solar industry is growing dramatically. Starting salaries for installers more than double the state’s minimum wage, and solar job seekers can have imperfect backgrounds and still get hired.

Power52’s energy professional training program targets at-risk young adults, returning citizens and military veterans living in Baltimore City. The 16-week program is intense. After weeks of classwork and exams, solar students hit the real world with four weeks of on-the-job training. The reward is clear: Graduates have jobs waiting for them upon completion.

Each day starts with “power principles,” which help students find motivation and inspiration.

“Training must lead to a job and 100 percent have to be placed. That’s the real point in Power52,” said Jason Jannati, vice president of project development for Power52.

“Everyone gets a fair shot,” added Wallace. “People come into Power52 one way, and leave right. There’s no reason a trainee can’t make it and make enough of a living to not hit the streets. Our vision is to help build a successful human.”

Speaking to the current trainee class, Jerome “Rome” Pinder, a Power52 inaugural class graduate, shared some advice: “Take your time. Stay focused. Don’t miss one day of class. My confidence went up week after week, but it is a tough program, with a lot to learn in 16 short weeks.”

A bartender before joining, Rome said that is was either Power52’s training program or nothing.

Many in the Baltimore area do not have solar-friendly rooftops. In an effort to increase locally sourced renewable energy, Maryland’s enacted the Community Solar Act in 2015.

While Maryland’s electricity is generated mostly from coal, natural gas and nuclear energy, the state is a leader in testing if offsite solar can work. The 2015 pilot law directs Maryland’s utilities to allow entities like Power52 to feed their solar-produced energy into our local grid. The policy smartly made community solar accessible to all, including lower income households, nonprofits and municipalities.

Community solar and its cousin, virtual aggregate net metering, also allow businesses, nonprofits and citizens to invest into a share of a local offsite solar installation. That in turn earns them credit on their utility bills, valued by the amount of sun-powered electricity generated from their share.

Maryland’s community solar pilot program is about halfway through a three-year pilot phase. This April, the Maryland Public Service Commission accepted subscriber applications; Power52 was chosen as an approved subscriber, as well as for “interconnectivity,” meaning the organization can connect the output from its Nixon Farm solar panels directly into the local power grid.

Another first: Power52’s Nixon Farm project is the state’s first “virtual aggregate net metering” project that allows agricultural businesses, municipalities and nonprofits to group together and enter into power-purchase agreements with Power52.

Pray With Your Feet

Power52’s co-founders leaned on their faith when they dreamt up their organization, and you could feel it during the training session at Nixon Farm. They’ve brought authenticity to the soul of Power52. As one one of the trainees said during a Q&A session that day, “Power52 wasn’t in it just for the money. I appreciate that.” 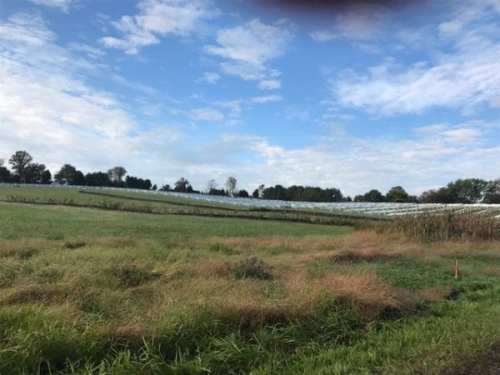 Follow me
Laurel Peltier
Laurel writes the monthly environmental GreenLaurel column. A graduate of UVA's MBA program, she spends her time with her family and making "all things green" interesting. She co-wrote the Abell Foundation Report detailing Maryland's dysfunctional energy supplier marketplace and the negative outcomes for low-income households.