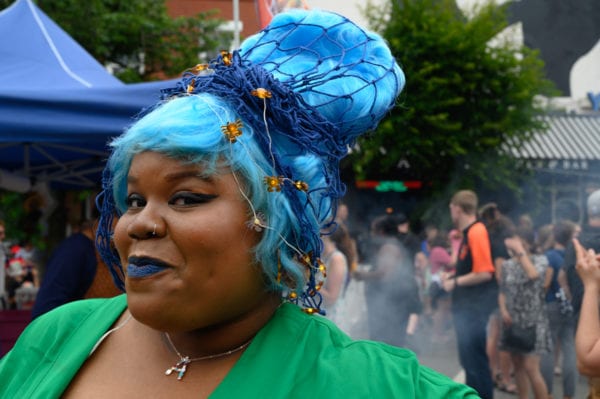 One of Baltimore’s most popular street festivals is going online for 2020, due to the COVID-19 pandemic.

“This year HONfest 2020 is being transformed into a virtual celebration of HONS and their enduring spirit even in the face of adversity,” founder and organizer Denise Whiting wrote on Facebook Thursday.

The two-day festival, planned for June 13 and 14, won’t have the main stage on W. 36th Street in Hampden, and it’s suspending the contest to find Baltimore’s Best Hon.

Instead, organizers want to honor all the great Hons from past years by featuring them on Facebook and Instagram.

“We are encouraging our HONS to dress up, have fun and share their photos and videos with us,” Whiting said.

This year is the 27th HonFest, the annual festival that celebrates beehive hairdos, cat eye glasses and the city’s working-class roots. Starting in 1994 as a one-day event, and growing to two days in 2007, it draws thousands of people to the streets of Hampden, many from out of town.

With the change in format, HonFest becomes the latest of several large local gatherings to postpone or otherwise change their plans because of the COVID-19 crisis that has kept the city in quarantine for weeks.

Others range from the Flower Mart (cancelled for 2020) and Baltimore Pride Weekend (postponed from June 20 and 21 until August or September), to the Preakness and the start of the baseball season (both delayed, for now).

Still up in the air are the Fourth of July fireworks at the Inner Harbor and Artscape, both produced by the Baltimore Office of Promotion and the Arts and tentatively still on the books for July. BOPA spokesperson Tracy Baskerville said this week that her agency is coordinating with the City of Baltimore and that she hopes to have information about the two events soon.

Organizers of public events around the state have been in limbo because of an executive order by Gov.Larry Hogan that prohibits large gatherings until the state of emergency is lifted.

Hogan has outlined a three-phase plan to start reopening the state from lockdown, but lifting restrictions on large gatherings is part of the third and final phase of the plan and no dates have been given.

Whiting said she waited as long as she could to see if there would be any changes to the statewide order. At this time of year, she said, she usually would be applying for city permits to close W. 36th Street to vehicles and set up for the festival.

“We pretty much had everything planned as of January,” she said. “We had the musicians booked, the sponsors lined up. It takes a lot of energy and costs a lot of money to make it happen, but a lot of people love it and look forward to it.”

Whiting said she didn’t want to do anything that would endanger anyone’s health or go against experts’ guidelines for social distancing. But she also didn’t want to cancel HonFest altogether.

She said she concluded that the best course for 2020 would be to hold a virtual HonFest by asking people to send in photos and videos from previous years and putting them on Instagram and the HonFest Facebook page. She said the weekend won’t have the Hon contest because it would be hard to judge without doing it in person.

Whiting said she’s still working out the details and hopes to include “the usual suspects” such as Master of Ceremonies David DeBoy and dance party DJ Landis Expandis.

“It’s an uncertain time for everybody,” she said. “But we’re going to make the best of it.”