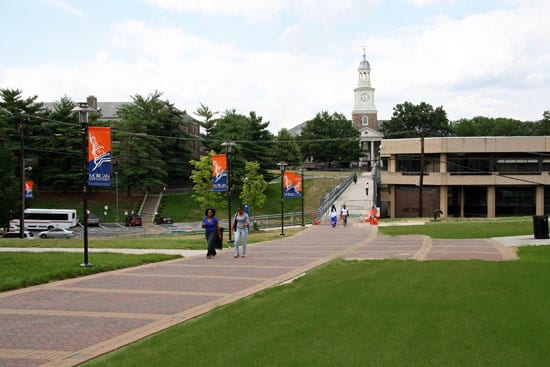 ANNAPOLIS — Amid settlement talks between Republican Gov. Larry Hogan and advocates for Maryland’s four historically black colleges and universities, the House of Delegates is scheduled to hold a hearing Friday on legislation that would force the governor to appropriate more than $16 million in the state budget for each university, starting in 2021.

The hearing comes less than two months ahead of the April 20 deadline set by the 4th U.S. Circuit of Appeals for Hogan and the universities to reach a settlement regarding a 13-year lawsuit.

The commission is in charge of establishing policies for the state’s public and private universities and also administers state financial aid programs.

A U.S. District Court judge in 2013 ruled in favor of the universities, stating that Maryland violated the constitutional rights of students at the state’s historically black institutions. The judge ordered the two sides to mediate and reach a settlement but when talks failed, the state appealed to the U.S. Court of Appeals in 2017, where a panel of judges reiterated in January that the two should find a resolution.

In 2018, Hogan offered the four institutions a settlement of $100 million to be distributed over 10 years, but Del. Darryl Barnes (D-Prince George’s County), chair of the Maryland Legislative Black Caucus, called the offer “woefully inadequate.”

Hogan met in January with the Black Caucus to discuss the current dispute.

House Bill 779 is sponsored by Del. Keith Haynes (D-Baltimore), as well as several members of the Black Caucus, including Barnes.

Haynes said the universities will have discretion over use of the funds, but they will focus on enhancing scholarships, faculty recruitment and course development.

Haynes said the legislation doesn’t seek to end the current litigation or replace a settlement, but acts as a “standalone funding bill” for future investment in the institutions. Two of the state’s historically black institutions, Coppin State and Morgan State, fall in Haynes’ district, and he said the universities face a “whole new realm of competitiveness.”

Retention and graduation rates for the state’s historically black institutions fall significantly below the rest of the state’s four-year public institutions. Sixty-six percent of first-year students at the four universities return for a second year, compared to 83 percent at the other institutions, according to the Maryland Higher Education Commission’s 2018 Databook.

Similarly, graduation rates at historically black institutions are 34 percent, less than half that of the rest of the state’s four-year public institutions, at 73 percent, according to the data.

Capital News Service reported in 2018 on legislation the House and Senate introduced to implement a computer networking and cybersecurity program at the institutions, as well as mandating equitable funding for the universities—much like this year’s legislation—but the bills failed to pass through both chambers.