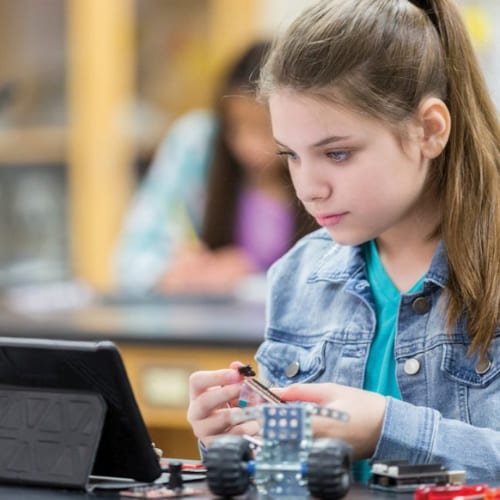 When Anna Klein’s daughter, Mia, was a four-year-old preschooler at Beth Tfiloh Dahan Community School (BT), her class was asked to bring in brown bag lunches for the homeless. The bags were being delivered to Beans and Bread, a soup kitchen in Fells Point, not far from where the family was living at the time.

“I volunteered to drop them off,” recalls Klein. “And when I did, it was because these are the values I want my children to learn. I want them to know that they have an obligation to give back, not only to the Jewish community, but also to the global community. And, Beth Tfiloh emphasized the values of going out in the world and doing good.”

It was this commitment to civic responsibility, coupled with the knowledge that a Jewish private school education* developed the Jewish identity of its students, that was instrumental in her desire to see her children attend BT.

“I attended Jewish private schools through 12th grade and am the grandchild of a Holocaust survivor so my Jewish identity was always very strong and a big part of who I am,” she adds.

“A Jewish day school education has proven to be one of the most important entities in securing the next generation of Jews – no matter how they choose to identify as Jews,” says Michael Elman, who co-chairs The Associated’s Day School Commission with David Hurwitz.

“The value added,” he adds “is that Jewish day schools also allow Jewish students to grow their Jewish identity without sacrificing academics but actually enhancing them.”

Recognizing the impact Jewish private schools have on the next generation of Jews, The Associated: Jewish Federation of Baltimore provides scholarship assistance to students at 11 Baltimore day schools to ensure students interested in attending can receive a Jewish education.