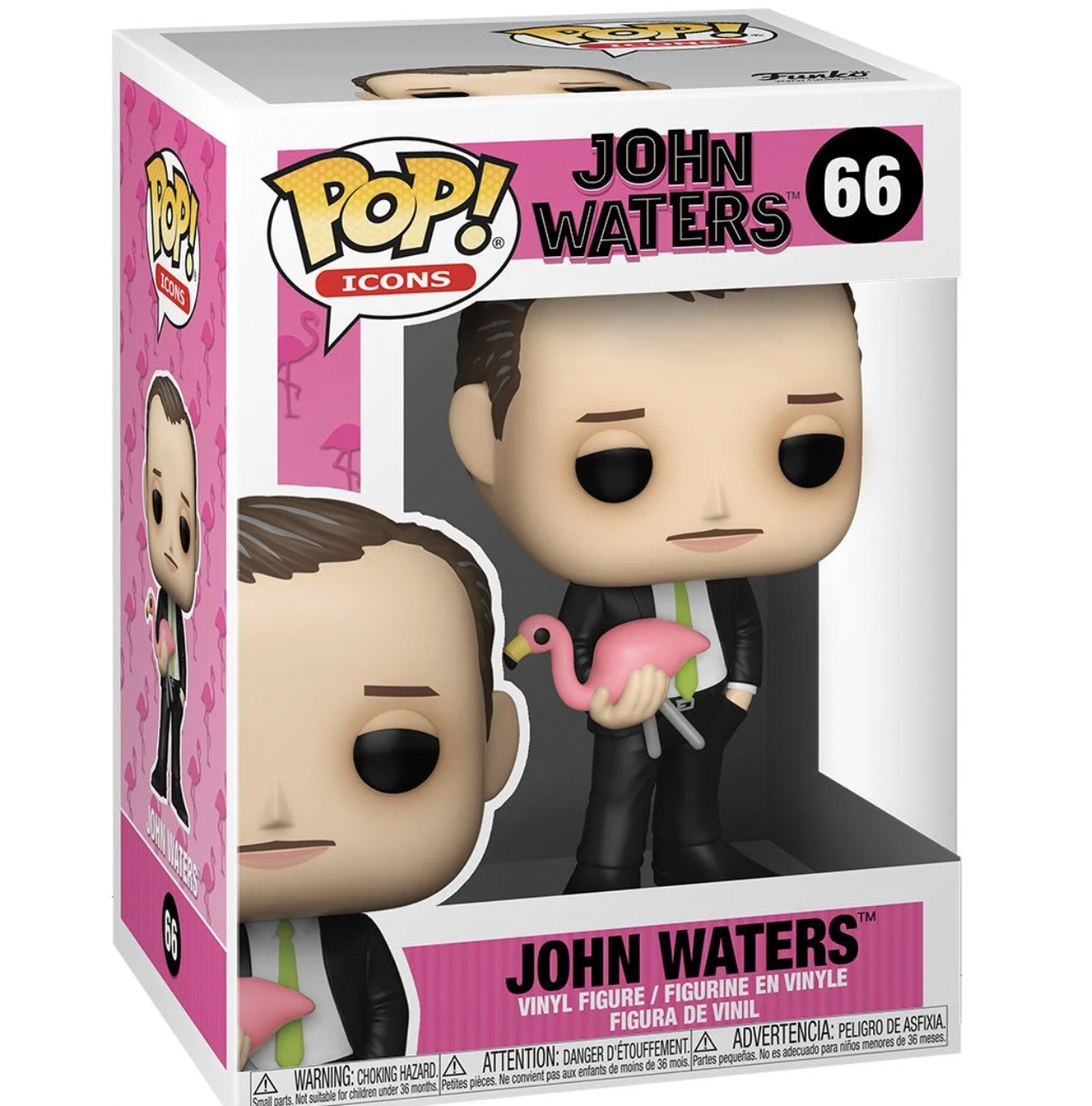 Writer and filmmaker John Waters has been named an officer of the French Order of Arts and Letters. The Writers Guild of America gave him a lifetime achievement award. The Baltimore Museum of Art is naming its restrooms after him. But this week he received perhaps the ultimate honor:

John Waters is being immortalized as a Funko Pop! figure.

Funko, the company that makes pop culture collectibles including figurines and bobbleheads, announced this week that it’s bringing out a vinyl figure of John Waters as part of its POP! Icons series. That makes Waters one of the first Baltimoreans ever to become a Funko POP! (Edgar Allan Poe, who was born in Boston but died in Baltimore, is another one.)

Images released with the announcement show Waters in a dark suit, his left hand in his pocket, his right hand holding a pink flamingo. His face is rounder than usual, but they got the thin mustache right. The tie is puke green, one of Waters’ favorite colors. 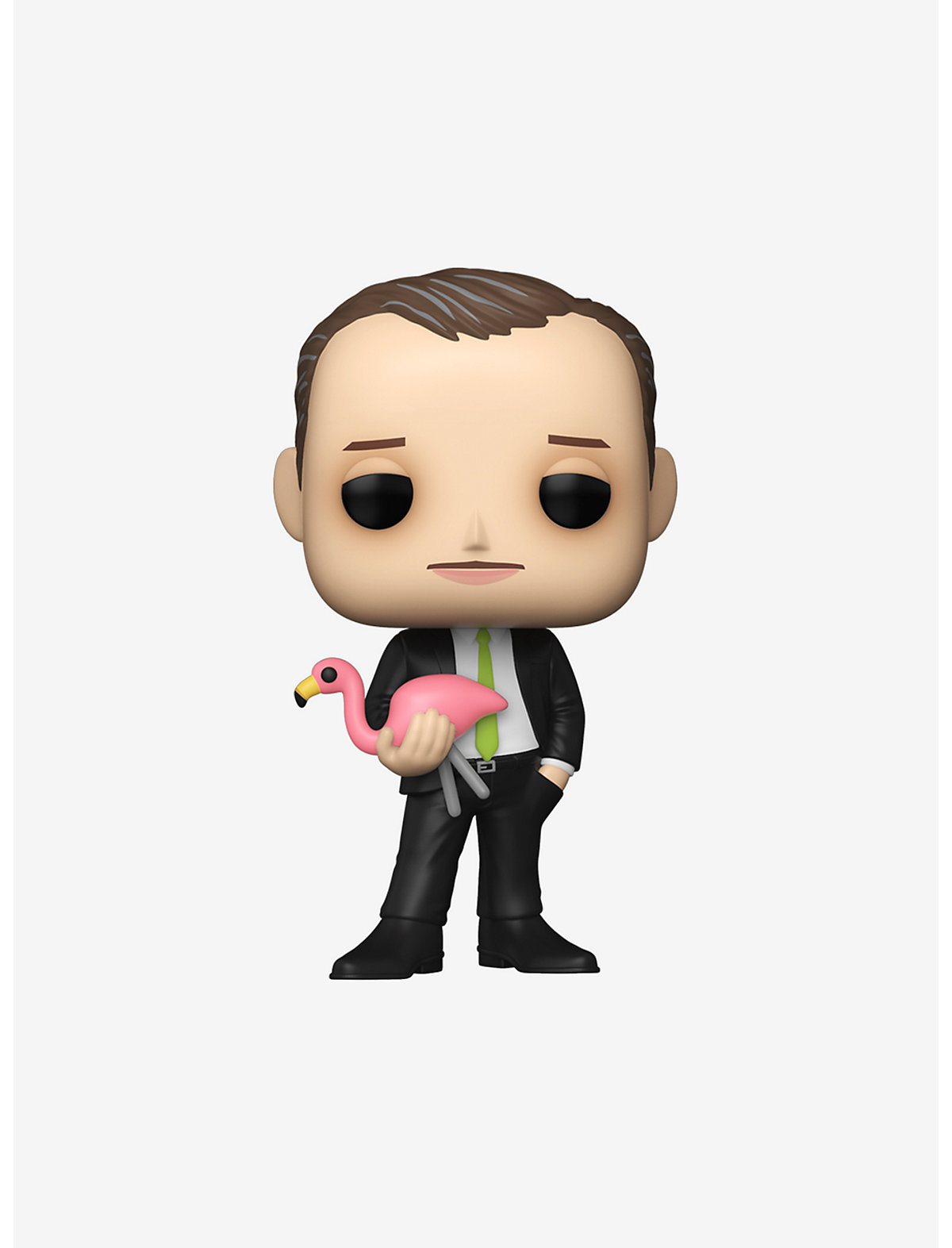 Waters, 74, said he was delighted when his agent came to him with Funko’s idea.

It’s “an honor,” he said. “You have to be really kind of weirdly well known for it to even be asked, so I was thrilled. And you know, I look like a cartoon anyway, so it wasn’t hard for me to imagine it.”

Waters joins hundreds of characters who have made the list of Funko’s pop culture collectibles, from Mickey Mouse and the Little Mermaid to Guy Fieri and Grumpy Cat. He was introduced on the same day as a figure of Dracula author Bram Stoker.

Other Funko figures include characters from Marvel, Star Wars, Batman and Harry Potter. Adding Waters is a sign that his ‘brand’ is becoming more mainstream.

“It’s a very wide-appeal product,” he said. “It’s not an esoteric little company, so I think it has to be pretty mainstream. That’s why it’s so hilarious that I’m one of them.”

Funko started in 1998 as a maker of bobbleheads and has grown to create nearly 20,000 different products in dozens of toy lines. It’s part of the Entertainment Earth network, a California-based retailer that bills itself as “the premier online destination” for toys, action figures and “the coolest gifts and collectibles pop culture has to offer.” Other toymakers that work with Entertainment Earth include Hasbro and Mattel.

The figure of Waters is 3 ¾ inches high, comes in a window display box and sells for $10.99. An exact release date hasn’t been announced, but Funko indicates it will be in June. The figure is also showing up for sale on Amazon, Walmart, Hot Topics and other sites, and it will be in stores where Funko collectibles are sold.

“I love how it looks,” Waters said. “They all look exactly the same. They all have the same-shaped head. You can’t be skinny or fat or anything. You just have to have something that is very much representative of who you are, and my mustache obviously got me the job.”

As for the hair and other details, “I never had that much hair in my life, and I made them put a little gray in it,” he said. “But it’s supposed to be an overall caricature. It’s not any particular designer suit, but I did pick puke green” for the tie.

Waters said he’d be happy if Funko marketed a figure of Divine, the actor who starred in drag in many of his movies, including Pink Flamingos in 1972, and died shortly after Hairspray came out in 1988. But he said Divine’s estate would have to authorize that, not him.

For now, “I’m just satisfied that I got one,” he said. “If you look through all the other people they’ve done, it’s great. Whoever thought I’d be a toy?”