Baltimore won’t have its annual Martin Luther King Jr. parade this weekend because of COVID-19 restrictions on public gatherings, but several local cultural institutions have come up with alternate ways to honor the civil rights leader.

Programs have been planned by the Reginald F. Lewis Museum of Maryland African-American History and Culture, with assistance from the Enoch Pratt Free Library, the American Visionary Art Museum; the B&O Railroad Museum and others.

The Reginald F. Lewis Museum of Maryland African American History and Culture, at 830 East Pratt Street has organized a four-day virtual celebration of King’s legacy, in conjunction with the Enoch Pratt Free Library and the Baltimore Office of Promotion and the Arts, the agency that puts on the parade. 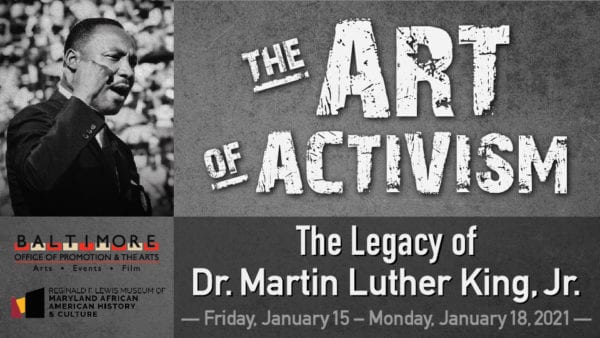 “The Art of Activism: The Legacy of Dr. Martin Luther King Jr.,” starts today and runs through Monday, with a series of live “arts and activism” events combined with a YouTube video showing highlights from past MLK parades in Baltimore.

“Although it is not possible to gather to celebrate MLK weekend with Baltimore’s traditional parade, the virtual programs happening this weekend offer a safe way to continue honoring Dr. King,” said Santiago Nocera, BOPA’s marketing and communications associate. “Through four days of virtual events, The Art of Activism features inspiring conversations and performances from community leaders and creatives whose work carries on the legacy of Dr. King.”

Friday, January 15, at 7 p.m.: A High School Juried Art Show and Artist Talk with Baltimore-based painter Will Watson, recognizing Maryland high school students who participated in the museum’s annual art show. This year’s artistic theme was inspired by the Make Good Trouble: Marching for Change exhibit currently on view at the Lewis museum. Besides Watson’s talk, the program includes a spoken word presentation by a poetry group called DewMore Baltimore and a conversation with student artists. The museum organized the show in partnership with the Maryland State Education Association.

Saturday, January 16, at 1 p.m.: A lecture featuring Eddie S. Glaude Jr., an African American author who writes in the tradition of James Baldwin and Ralph Waldo Emerson and is the James S. McDonnell Distinguished University Professor at Princeton University. His books include Begin Again; Democracy in Black: How Race Still Enslaves the American Soul, and In a Shade of Blue: Pragmatism and the Politics of Black America. According to BOPA, Glaude will talk about race in America “following the Trumpian era of shattered promises and white retrenchment.” The museum organized the lecture in partnership with the Enoch Pratt Free Library.

Sunday, January 17, 2021 at 7 p.m. and Monday, January 18, at 9 p.m. on Charm TV/Comcast Channel 25: A “Celebratory Film Screening” showcasing Baltimore artists and activists whose work honors King’s legacy. The video will also feature footage from past MLK parades in Baltimore, highlighting marching bands and other participants. After streaming on Charm TV, it will be viewable on BOPA’s YouTube platform. The film screening is sponsored by WBFF FOX45 and Radio One: 92Q, Magic 95.9, Spirit 1400, Praise 106.1, and WOLB 1010, and supported by Charm TV and the City of Baltimore.

Aside from MLK Day, the Lewis Museum is open Thursdays, Fridays and Saturdays from 10 a.m. to 5 p.m. and Sundays from noon to 5 p.m.

The American Visionary Art Museum, which usually marks the Monday federal holiday celebrating King’s birthday with a “Dare to Dream Day,” will be closed this year for the first time in its history on MLK Day but will be open the rest of the weekend.

For Monday, it has organized a virtual Dare to Dream celebration with an Open Mic and Poetry Slam, an artist talk with Kyle Yearwood and a musical performance by Landis Expandis, starting at 11 a.m.

Museum founder and director Rebecca Alban Hoffberger said MLK Jr. day is usually one of the busiest days of the year at AVAM, and that posed a problem with COVID restrictions. She said the museum has been operating since September at reduced capacity, even as larger museums have been closed for part of that time. But because its Dare to Dream Day is one of the museum’s most popular events, she said, it posed challenges for both the staff and visitors at a time when attendance is restricted.

“We’re doing a virtual one because we were close to 5,000 people the last several years,” she said. “We can’t open, because there’s no way we can keep people away, and we’d be so far above what we’re permitted…It’s sad because it’s the first time [the museum will be closed] since we opened more than 25 years ago.”

Hoffberger said she’s hoping to get Mayor Brandon Scott to record a greeting for the day’s events and say which of King’s speeches or quotes mean the most to him. Aside from Monday, she said, the museum at 800 Key Highway will operate on its normal schedule from Wednesday to Sunday, 10 a.m. to 5 p.m.

The B&O Railroad Museum at 901 West Pratt Street is devoting the weekend to telling the story of civil rights and the railroad, with a talk about segregation on railroad cars by the Rev. Alvin Hathaway Sr.; the debut of a new oral history project; a tour entitled “From Slavery to Civil Rights,” and an appearance by Frederick Douglass ‘reenactor’ Reginald Peterson.

The National Great Blacks in Wax Museum at 1601 East North Avenue, which is usually closed on Mondays, will be open on MLK Day, from 10 a.m. to 4 p.m. Its normal hours of operation are Tuesday through Saturday from 9 a.m. to 5 p.m. and Sunday from noon to 5 p.m.

The B&O Railroad Museum is devoting three days to providing a “Spotlight on Civil Rights and the B&O.” The schedule includes:

Saturday, January 16, all day and then throughout the weekend: The launch of the Union Baptist Church Oral History Project, a video about “the African American experience with the railroad,” from first-hand accounts of riding in a segregated train car to hiring practices intended to promote diversity. The official debut will be on Monday.

Saturday, January 16 at 2 p.m., Sunday, January 17 at 3 p.m. and Monday, January 18 at 1 p.m.: A tour that highlights the history of African Americans on the railroad, “from slavery to civil rights.” The tour is included with the price of admission. Kid-friendly version of the tour will take place on Saturday and Monday at 10:30 a.m.

Sunday, January 17, from 11 a.m. to 1 p.m.: Educator and reenactor Reginald Peterson appears as Frederick Douglass, to discuss the life of the Maryland abolitionist.

Sunday, January 17 at 1:45 p.m.: The Rev. Alvin Hathaway Sr. will give a talk entitled “Union Pastors Riding on the B&O Railroad,” discussing how Baltimore’s Union Baptist Church played a key role in the civil rights movement by working to overturn a Maryland law that permitted segregation on train cars. After the talk Hathaway will be available for a Q&A session.

The American Visionary Art Museum’s schedule for its virtual “Dare to Dream” Monday is  11 a.m.: An artist talk with Kyle Yearwood; 12 p.m.; a Poetry Slam and Open Mic session, and 1 p.m.: a performance by local musician Landis Expandis. Each online session will last about 45 minutes.  For the poetry slam and open mic session, AVAM put out a call for submissions from around the country, with the suggested theme of resilience.

Hoffberger said the American Visionary Art Museum has always made an effort to honor Martin Luther King Jr. because he was a visionary and someone to look to for inspiration.

“Right from the beginning, I chose Dr. King’s day because I’ve always loved him,” she said. “Martin Luther King studied not only Gandhi but Aristotle. He studied all the great thinkers. I feel that 1000 years from now, people will look at what King said in the same way as Confucius or Rumi. He was a great soul…The validity of his insights and wisdom transcends any kind of culture.”

Although some museums are making a push now to promote diversity and social equity, that has always been a big part of AVAM’s mission, she added.

“A lot of people are now going, oh, yeah, we have to work on social justice and stuff in our museum,” she said. “It’s like, Hello? We opened with such a mandate from the earliest days. If you look, we showed more African-American artists and have given them first-time shows because they were good, not because of the color of their skin.”

Hoffberger said the federal holiday marking King’s birthday is the only Monday that AVAM has ever been open because she believes it’s a fitting way to mark the occasion.

“I was so upset that Americans get the day off and they celebrate such a great visionary by discounts on bras and washing machines,” she said. “What I wanted was, no, that we would place his obscure speeches throughout the buildings, that we would have cake and people would come and we’d unveil the cake. We’d have over 1,000 portions of cake.”

Performers have always been part of the celebration, too, she said.

“We’ve had the Cardinal Shehan children’s chorus that performed on Oprah. We have Abu the Flutemaker. We have performances and crafts and tours of our exhibitions. And it’s all free. But remember, we can do none of that. It’s all virtual this year.”

Hoffberger noted that the museum has been open with limited capacity since September 25, even though the Walters Art Museum and Baltimore Museum of Art have been closed since November 25. She said the museum saw a brief drop in attendance right after Thanksgiving and she believes it’s partially due to the fact that the Walters and BMA have been closed since then and people think AVAM is closed too, even though it isn’t.

“We were doing very well…until the BMA and the Walters closed in December, because people thought — you know how people are — they heard on the TV: the museum’s closed. Even friends of mine and fans would say, ‘When are you guys going to reopen?’ I’d go, No, we are open! We’ve been open!”

Now, she said, the numbers are back up and AVAM has seen an increase in visitors from the Washington area, where many of the museums have been closed due to COVID-19. “We’ve had a lot of visitors from D. C. because there’s nothing to do there,” she said.

Directors of the Baltimore Museum of Art had been looking forward to reopening on January 16 so the institution could welcome visitors over the MLK weekend, but they ultimately opted to stay closed.

“At this time, the BMA has decided to remain closed as COVID-19 cases continue throughout the country,” directors said in a message sent out this week. “Please check our website in the coming weeks for updates on our new reopening date.”

The Walters Art Museum announced that it will reopen on February 3. The BMA’s decision means Baltimore’s two largest museums likely will be closed for the rest of January. Their closings have created an opportunity for other museums such as the Lewis Museum, Great Blacks in Wax, the B&O Railroad Museum and AVAM to fill the void.