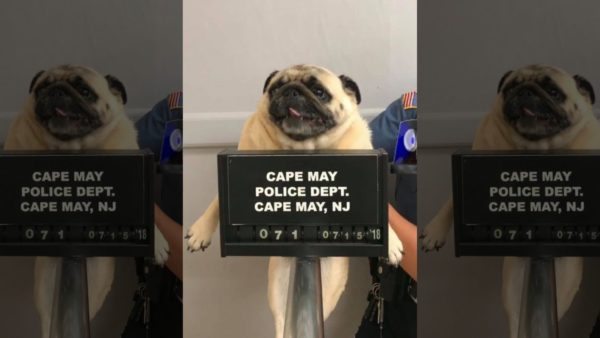 As I mentioned a while ago, I’ve been collecting stories about pets from my neighbors here in this little corner of North Baltimore. You may have read the sad and unusual story of Jupiter, a dog who was killed by a cop. Here are two more from the growing pile, one dark, one light.

My next-door neighbors Chip and Kristy, a programmer and an exercise teacher, also parents of a young soccer prodigy, had a dog and a cat when I first met them. Now they do not have any pets except the koi in their backyard pond. We never will again, says Chip darkly.

Oh, you would have kept that dog forever, says Kristy. You know you would.

The couple met in art school; Kristy knew the moment she laid eyes on him that they would always be together. In their first apartment, near MICA in Bolton Hill, they had a rail-thin blue point Siamese named Shishu and a sweet miniature pinscher named Pinchy. Like Kristy herself, Pinchy was originally from Cleveland; she was big for her breed — overfed, says Chip — and devoted to Kristy. Kristy was devoted to her too, so much that she was unable to stop imagining the day she would be gone. Don’t leave me, she would whisper into Pinchy’s neck. You won’t leave me, will you? This is a form of emotional self-torture I am very familiar with; perhaps many pet owners are.

Whenever Kristy went out, Pinchy would sit by the window to await her return. That is how she got hit by a car, bolting out the back door to greet her. She died in Chip’s arms. One of the worst days of my life, Chip says. Kristy doesn’t say anything.

A couple of weeks before Christmas of 2003, Kristy saw a mini-pin puppy in a pet store in White Marsh. Being the same breed, of course he looked like Pinchy — perky folded ears, big brown eyes, black and tan markings on his muscular little body, a white diamond on his chest. This puppy had taken the wire hoop that was meant to hold his food bowl for a chair and had crammed his whole body into it, so silly and weirdly adorable.

The same breed, they look alike, you think you’re getting the same thing, says Kristy.

They brought him home and named him Puppers, and at first things were not so bad. When they left both pets with Chip’s mother shortly after they got Puppers, the dog would pitch his toy over the gate she’d put up to keep him in the kitchen. Shishu would retrieve the toy and leap the fence to return it. It was adorable!

Both pets moved with the couple to Keswick Road.

Eventually, Puppers revealed himself to be a relentless creature, driven to mania and wildness. Kristy took him to puppy kindergarten, where he graduated second to last in his class, followed only by an unruly Rottweiler. Anything could drive him mad. When Kristy sprinkled the backyard with organic blood meal fertilizer, he would go ballistic, rolling and leaping and turning somersaults. One time they took him to Assateague where he flew up and down the beach as if possessed until out of the corner of his eye, he spied two people, sleeping. He flew over and launched into a fusillade of terrible barking as they bolted awake. You could almost hear him cackling as he fled.

What happened when they had a baby is an old story, just what happened to Lady in Lady and the Tramp. Kristy was an inveterate detractor of such owners — what kind of parent are you going to be, she said if you just abandon your dog when your baby is born? But as bad as he had become, Puppers was a thousand times worse after baby Cade came home. He pissed all over the house, ruining several fine rugs. He snapped at visitors. He barked constantly and destroyed all the baby’s toys and several pairs of his shoes. After all her high-minded words, Kristy was ready to get rid of him almost immediately. The day they saw blood on Cade’s nose, Chip agreed, though he felt Thomas the Tank Engine might have been partly responsible.

It was the Sunday morning after they took him to the SPCA. Kristy screamed from the bedroom upstairs for Chip to come. There was Puppers on the TV screen, sitting so docilely in a lady’s lap they suspected sedation. To adopt this pet, call 555-1212. Kristy assumed she was being punished for her sins. Should we get him back? she asked. Later that afternoon, Chip called. Thankfully, the dog had been adopted within the first hour.

In Chip’s dreams, Puppers is still alive; so is Shishu, and Pinchy. My pets haunt me, he says.

Bean, or A Slow News Day

In her senior year of high school, my daughter got herself a very nice boyfriend with a very nice family, and during the last summer before college, she visited at their beach house in Cape May, New Jersey several times. Even though I am from New Jersey, I have never been to Cape May. It’s strange when your children start doing things you’ve never done yourself, but I’ve gotten used to it, what with Vincie going to Asia on tour with The Killers and Hayes marrying people from Ecuador and visiting power plants all over the world to do god knows what.

So, the boyfriend’s family took their two dogs along with them to the beach. Riley is a two-year-old black lab, and Bean is a five-year-old pug. Bean amuses everyone just by existing, in the way that pugs do. That squished face, that furrowed brow and pouty smile, those silly little ears: no one can resist a pug. Bean honks and snorts, she hops, she gently sucks people’s toes through their socks. When I asked Jane’s young man if Bean was fat, he quickly said “all pugs are fat” and also that Bean has always been just above or just below her ideal weight. These are the exact same things I say whenever the possibility of my own dog’s obesity has been raised.

Anyway, one of the kids on the beach trip must have let Bean out, and it was about an hour before they noticed and started looking for her. Right next door, the neighbors told Carter, yes, they had seen a dog, a pug, and after keeping it for about thirty minutes, they called the police to ask what to do. The cops had picked her up and taken her down to the station. Carter jumped in the car and rushed down to retrieve her.

After he got home with the miscreant, another neighbor, one who follows the Cape May police Facebook page, came over to show the family that they had posted a mug shot of a pug, and a second picture of the pug behind bars.

This was a day when no tsunamis or earthquakes were visited upon our planet and Donald Trump had done nothing more horrible than retracting some earlier stupid comments, so news of Bean’s escapade went viral, reported on news sites from Kansas City and Chicago to Germany and the United Arab Emirates. All over the country writers let fly with puns about “the dog days of summer,” the “pugshot,” and the cookies posted as bail. #pugmug went crazy on Twitter and Instagram. Patrolman Michael LeSage was quoted all over the world about how he got the pug in his cruiser: “Her short little legs couldn’t make it into the car, so I had to lift her up.” This quote appeared even in The New York Times, in which Jane’s boyfriend’s mother was astonished to see her name, reporting that Bean was sound asleep after an exciting day on the run.

Pugs can’t help it, they are funny even when they are lost.