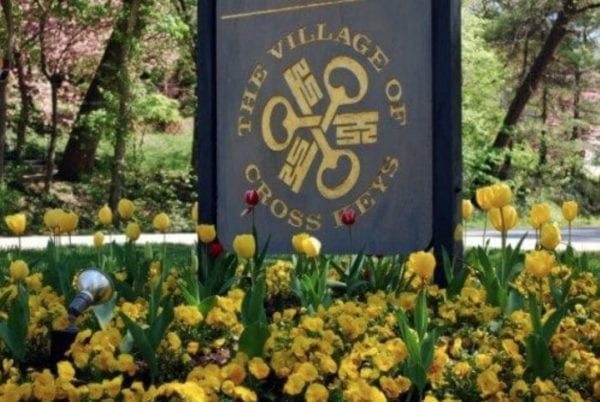 New owners of The Village of Cross Keys have signed 15 leases since they took over last year, with first-time tenants including Calvert School; Monument Sotheby’s International Realty; Sandy Hillman Communications and the Baltimore School of Music.

In all, Caves Valley Partners has signed up 10 new tenants, renewed five leases, and has more retail and office transactions in the works, according to partner Arsh Mirmiran.

In addition, Mirmiran said, Caves Valley has signed a letter of intent with a luxury apartment developer with which it will build a 350-unit midrise apartment building. He declined to say who the developer is.

Additional plans call for a grocery store, restaurants, a gym or fitness center, and a hair salon or spa, but operators have not been named for those businesses.

The new lease announcements come six months after Caves Valley acquired the retail and office portions of Cross Keys from New York-based Ashkenazy Acquisition Corporation. They’re a sign that Caves Valley is moving quickly to revitalize the planned community at 5100 Falls Road, which was built by legendary developer James Rouse but was later sold and languished under out-of-town ownership.

Caves Valley completed its acquisition on July 21, ending 16 years of ownership by Ashkenazy. The community also includes a hotel and nearly 700 residences, but they weren’t part of the sale to Caves Valley.

“Our design, construction, and leasing teams are surely getting sick of hearing me tell them that this redevelopment is ‘a sprint, not a marathon,’ ” Mirmiran said in a statement. “But that’s how we have felt from the start and that is going to be the tenor of our efforts moving forward. We are going to be methodical about the redevelopment, but there is no reason we can’t quickly bring Cross Keys back to prominence, even in the midst of a pandemic.”

Mirmiran is using new tenants to help “rebrand” Cross Keys, which was known for many years as a vibrant center for businesses and shopping. The new tenants, in turn, say they expect their moves to Cross Keys to be beneficial as well.

Charlie Hatter, co-owner of Monumental Sotheby’s International Realty, said in a statement that his company’s decision to move to Cross Keys was “driven by an alignment in our brands, our shared vision for the resurgence of Baltimore, and Cross Keys’ central location, which makes it easy to get to almost anywhere in the Baltimore area within a short drive.”

Cross Keys will serve as Monument Sotheby’s International Realty’s flagship office. According to Caves Valley and Hatter, the brokerage plans to consolidate multiple offices at Cross Keys and take advantage of the location to bring together a core group of agents, allowing them to work more collaboratively while remaining accessible to their clients and others.

Another lease that Mirmiran says fits the rebranding of Cross Keys is Calvert School, located in Tuscany-Canterbury. It will be opening the first off-campus facility in its nearly 125-year history at Cross Keys: an expansion of its Kiddie Calvert early childhood education center, serving approximately 100 children.

Calvert School Headmaster Andrew Holmgren said in a statement that “the additional Kiddie Calvert location at Cross Keys will be open to children aged 10 weeks to five years old and allow us to continue and expand Calvert School’s history of excellence by providing reliable child care and early education to families throughout Baltimore.” Enrollment for the facility is already open, and it is expected to be fully subscribed in time for its opening in the fall of 2021.

Another educator joining Calvert School at Cross Keys later this year will be the Baltimore School of Music, owned by James Lowe, a classically-trained guitarist and graduate of the Peabody Institute of Johns Hopkins University.

The music school’s faculty consists of musicians who teach both children and adults a variety of instruments, along with voice and composition. Lowe said his decision to move the program to Cross Keys follows “nearly a decade of successful music instruction and growth, after which we determined it was time to find a convenient permanent home from which we could serve musicians throughout Baltimore.”

Sandy Hillman Communications is a global public relations firm with a roster of prominent local and national clients. It’s headed by a longtime civic leader who gained recognition during the Schaefer era as director of the Mayor’s Office of Promotion and Tourism and then went into the private sector. Hillman’s office was on Kenilworth Drive in Towson, so for her the move to Cross Keys, which has already taken place, represents a return of sorts to the city.

“For us, Cross Keys is the ideal location,” Hillman said in a statement. “For the staff, it has dining, shopping, and most importantly, weather-protected free parking. For out-of-town clients, not only can we offer ‘down the hall’ hotel accommodations, but we are an easy drive to both BWI and the train station. And for our in-town clients, Cross Keys is easily accessible from both I-83 and the Beltway. I am thrilled that we are in the city and part of Cross Keys’ transformation.”

Cross Keys’ office leasing is being handled by MacKenzie Commercial and retail leasing is by AO Retail of Annapolis.

In his six-month update, Mirmiran said he expects the tenants signed so far to help set the tone for future leasing activity, including new retail tenants, and that one of his goals is to get the office space at Cross Keys fully leased by 2022.

To date, he said, Caves Valley has signed long-term leases for approximately 30,000 square feet of space at Cross Keys, and he expects the pace of leasing to increase, particularly with retailers, as the region and the country recover from the COVID-19 pandemic.

In addition, Mirmiran said, Caves Valley extended all retail leases that were nearing expiration to the spring of 2021. He said Caves Valley did that “to get through the winter of the pandemic, with the expectation that we will negotiate long-term leases in the coming months as the future becomes more clear.”

Mirmiran said work is nearly complete on interior upgrades at the Quadrangle building at Cross Keys and that work to improve the gatehouse, the main access roadway, and the interiors and facades of the Village Square office and retail areas will begin this spring and continue throughout the summer.

During a recent meeting with the Roland Park Civic League, Mirmiran announced that he has hired Patrick Terranova from the Baltimore Development Corporation to help oversee the revitalization of Cross Keys.

He said in his announcement this week that he’s counting on the new commercial tenants to help generate more business for new and existing merchants at Cross Keys.

“We love that these lead tenants will be bringing potential retail customers into Cross Keys on a daily basis, year-round,” he said. “It should create a highly symbiotic relationship for everyone.”