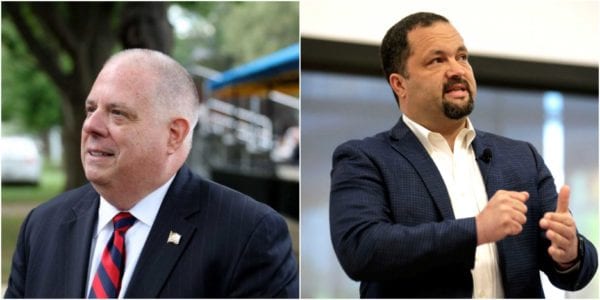 In the first poll released ahead of the general election in November, Republican Gov. Larry Hogan holds a 16-point lead over his challenger, former NAACP president and venture capitalist Ben Jealous.

Of the 831 registered voters surveyed between Aug. 1-8, 52 percent said they would back Hogan, compared with 36 percent for Jealous, according to the new poll released by Gonzales Research & Media Services. Eleven percent remained undecided, and 1 percent said they would cast a ballot for either Libertarian candidate Shawn Quinn or Green Party candidate Ian Schlakman.

If these poll numbers hold in November, Hogan would be the first Republican governor re-elected since Theodore McKeldin in 1954, and the first statewide Republican since U.S. Sen. Charles “Mac” Mathis in 1980 to win re-election, the poll said.

While Jealous holds comfortable leads in the typically Democratic Washington suburbs and Baltimore City, Hogan has established large margins in areas such as Baltimore, Howard and Anne Arundel counties, where he enjoys leads of 63 to 27, 62 to 26 and 61 to 33, respectively, according to the poll.

Critically, Hogan has the overwhelming backing of independent voters, earning 60 percent of their support, and has drawn away 29 percent of Jealous’ party members.

Hogan continues to be a popular governor, with 64 percent of respondents saying they have a favorable opinion of him–even as a majority say they disapprove of his party’s president, Donald Trump. It would appear that attempts to link Hogan to Trump are not working, according to the poll, with 13 percent of voters saying they would “consider
voting for Democratic gubernatorial candidate Ben Jealous as a way to express disapproval of Donald Trump.”

As for Jealous, his favorability rating stands at 31 percent, and slightly more voters, 33 percent, have an unfavorable view of him. There’s still a large number of voters (21 percent) who say they have not formed an opinion, and many (15 percent) who do not yet recognize his name.