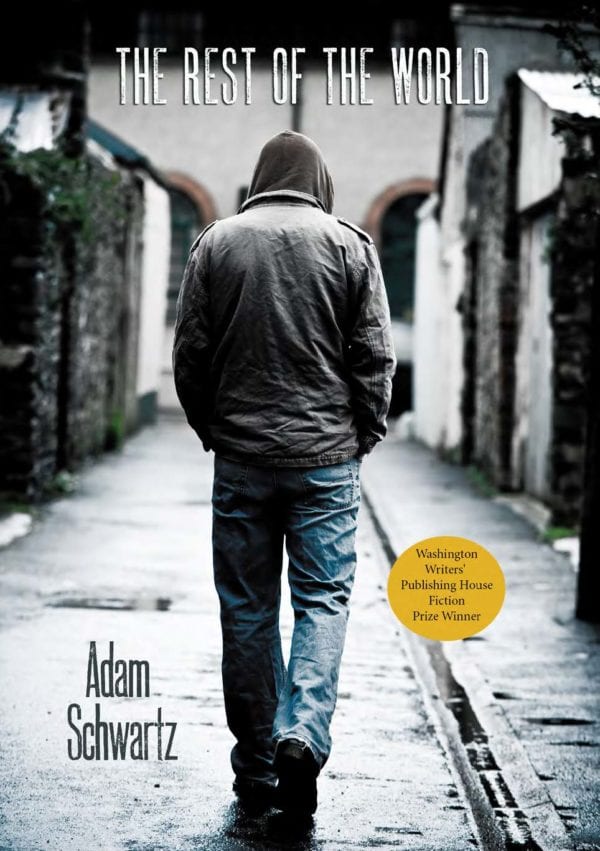 In his award-winning collection, “The Rest of the World,” veteran high school teacher Adam Schwartz imagines the lives of teenagers in Baltimore City’s broken neighborhoods. With action-packed, often heartbreaking plotlines, vivid settings, and screen-ready dialogue, eight stories make it clear how carefully Schwartz has observed and listened, how deeply he has felt, in his decades in and out of the classroom.

For the most part, the stories are told by or through the young characters themselves, completely immersed in their worlds. Only the last story in the collection contains a character that might be a stand-in for the author. “U.S. History” could be taken as memoir, except that the teacher’s name is not Mr. Schwartz. In it, a student named Dario announces that he will have to go to a funeral — the funeral of his younger brother. The narrative unfolds in just a few minutes, as Dario’s classmates react to this news. But as the narrator explains, “Funerals were not uncommon at our school. Each year students were shot in their neighborhood or someone else’s. … I could fill a classroom with these incandescent souls.”

Adam Schwartz has filled a book with “incandescent souls.” They are not dead, but they are living lives profoundly warped by violence. In “Pavane for a Dead Princess,” and “Carmen and Ant”, a careless comment or act ignites a bloody clash. In “The Rest of the World” and “Elegance,” characters use violence to protect the people they love. And even in the stories where no one gets hurt, no one is safe, either.

“I think of that time, before everything got crazy, and I see Missy Ha like she was then: nineteen with a heart-shaped face, teeth like fine china, and a little girl’s giggle for something she knew that you didn’t.”  From the very sentence of the very first story, foreboding is in the air, along with love and vivid, compelling characterizations. And then, of course, everything gets crazy.

We caught up with Adam Schwartz before his Baltimore launch to ask some questions.

Baltimore Fishbowl: As your publisher puts it in the jacket copy for The Rest of The World, “In a literary world where we’re warned by some to stay in our lanes,” your work is “refreshing” and “fearless.” This flags an issue I’m sure you’ve dealt with before — the current view that telling the stories of people of other races is cultural appropriation, which exploded with the controversy over Jeannine Cummins’s ‘American Dirt.’

In the New York Review of Books, Zadie Smith wrote a wonderful essay against the idea that writing about people who aren’t the same as you is necessarily bad or wrong. As she puts in the beginning of the piece, “To tell the truth, I rarely entered a friend’s home without wondering what it might be like to never leave. That is, what it would be like to be Polish or Ghanaian or Irish or Bengali, to be richer or poorer, to say these prayers or hold those politics. I was an equal-opportunity voyeur. I wanted to know what it was like to be everybody.”

These matters came into my mind while reading your book, and I wonder what you have to say about it.

Adam Schwartz: Of course, I love this quote from Zadie Smith. If art is fusion, she seems to be asking, isn’t it natural for artists to identify with people of different backgrounds? And, as a matter of aesthetics, I doubt any of us want to live in a cultural police state that prescribes or limits the influences painters, poets, chefs, musicians, filmmakers, etc. can draw on.

The facts of my personal biography are these: I didn’t grow up with the kinds of challenges many kids in Baltimore face. I have not had to endure racial injustice. I have not had my community, my prospects or the prospects of my loved ones sabotaged by deep, structural, systemic inequities. The advantages I benefited from growing up—both my mother and father had PhD’s from Cornell—provided me with myriad “second” chances. At 17, I was an angry, dreamy, reckless high school dropout. And, yet, as a young adult, I was given many, many opportunities to right myself. Every time one of my boneheaded blunders set me back, my parents, or sometimes an older sibling, were always right on time with one safety net or another to catch me. Without that cushion, life likely would’ve turned out very differently for me. Most of the students at my school don’t enjoy the benefit of soft landings. Their margin for error is precariously thin.

If readers are offended by the contrasts between me and some of the characters in my stories, there’s probably not a lot I can do to fix it. Still, I’ll say this: In the process of writing these stories, I’ve tried to operate with certain principles in mind: don’t traffic in stereotypes; don’t pathologize the urban poor; don’t exploit the pain of another group’s trauma or oppression; don’t be insensitive or inattentive to the historical context of these characters’ struggles; try to create rich, complex characters whose race is but one strand in their identity.

People who caricature sacred symbols, who perpetuate stereotypes or who borrow from the pain of another group’s oppression for their own benefit should be condemned. Who has a right to tell whose story is an important question. But the topic can also get exasperating. I like when identity politics champions the concerns of marginalized voices. But increasingly conversations around identity seem to push people apart and to underscore our differences, instead of our shared humanity.

The teens in my classroom are as varied as the facets of a jewel. I hope my stories honor these disparate presentations of humanity.

BFB: One of your epigraphs is “Things seldom end in one event,” by Richard Ford. I noticed this after I had been ruminating on the open-ended quality of your stories. It’s not unusual for a short story to leave me with the question “But then what happened?”, but I found myself having a particularly hard time letting go with some of yours. (Of course it’s partly that I just don’t want it to be over.) Does what I’m saying ring any bells? Do you have a philosophy about endings?

AS: As an adolescent, I read Eudora Welty’s story “A Worn Path.” (Spoiler alert.) It tells about an old woman who undertakes a difficult journey to get her grandson’s medicine, though readers don’t know the reason for her journey until the end. At the time I couldn’t have explained it, but the story made a huge impression on me. It was evocative, arresting and haunting. Some of these effects come from the story’s inconclusive ending. This was perhaps my first glimpse at how a writer can harness the power of suggestiveness by denying the reader a tidy resolution. Years later I came upon an essay Welty wrote about this story titled “Is Phoenix Jackson’s grandson really dead?” in which the author explained that this was the question she was asked most by readers—meaning, readers were so affected by the ending of “A Worn Path” that many felt compelled to contact the author for clarification.

Decades after first reading Welty’s story, its powerful effects are still with me too. Why is that? The power of an open-ended ending is that it allows the reader—if he or she is inclined—to fuse with the hopes of the protagonist. And since there is no more narration after the ending, that fusion and resonance becomes collaborative and lasts forever.

In fiction, exposition kills mystery, kills complexity, kills strangeness and, as readers, it makes us passive. An inconclusive ending—when rendered just so like Welty’s—invites readers to mediate the uncertainty and ambiguity using their own experiences and desires.

BFB: I thought it was interesting that “U.S. History” — the seemingly autobiographical one, as I mentioned earlier — was placed last in the collection. What’s the significance of that choice?

AS: You’re correct. That particular story was drawn from an episode at school that unfolded in much the same way the story does. (Similarly, the flashback in which the teacher accompanies a former student to a cemetery is also pulled from real life.) I did intend for this last story to act as a kind of post-script, to give the reader some context for how the earlier stories in the book were written. I suppose it’s also meant to suggest some of the helplessness I feel when students are made to grapple with loss and trauma.

BFB: Do you share your stories with your students?

AS: I don’t. When I’m at school, I’m a teacher. It’s about students, not about me and my work as a writer. But, when I’m working stories out, I do sometimes ask students questions about possible choices characters in my stories make to see if the characters’ motivations feel faithful to real life.

BFB: Tell about your path to becoming the Washington Writers’ 2020 Fiction Prize winner.

AS: I’ve been trying to write stories since college. I attended an MFA program in my late twenties. Kept slogging away afterwards. Nothing much happened for me as a writer until I was in my forties when my stories got a little better and I began publishing them in literary journals. Eventually, I had enough for a collection I can call unified (i.e., all the stories are about teens or young adults coming of age in Baltimore). The book had a couple close calls. A few agents liked it, but wanted a novel instead. The collection was a finalist in a contest sponsored by Orison Books judged by Victor LaValle. These close calls were painful because each time I felt like maybe, could it be? Ah, no. Then I had the great fortune of winning the Washington Writers’ Publishing House contest, and I’ve been ecstatic with the support I’ve received from everyone there.

The Baltimore launch for ‘The Rest of the World’ will be held online by the Ivy Bookshop on November 5th at 6:30 pm. Register here.