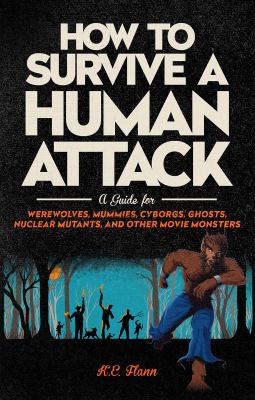 Reader’s of Kathy Flann’s fiction will recognize her clever and compelling sense of humor as she satirizes our species in her latest book, “How to Survive a Human Attack.” In this hilarious manual for monsters, Flann uses the conventions of a guidebook to savage humankind in all our self-absorption, materialism, and general cluelessness.

With a first part that outlines “The Basics” of the Human Species (with sections like “What Tools Do Humans Use?” and “Where Can One Find, Study, or Smell Humans?”), “How to Survive” goes on to pay homage – and offer life-saving advice – to feature-creatures ranging from traditional werewolves and witches to the more modern cyborgs and mutants.

Flann demonstrates careful attention to the minutia of each species, transforming classic tropes into punchlines that both seasoned horror fans and more fearful readers will appreciate. With a second part called “Species Specific Survival Guides,” Flann teaches werewolves, mutants and other fearful beasts how to survive a run-in with (gulp!) one of us.

Drawings and diagrams by Joseph McDermott appear throughout the text, helping readers to visualize a Swamp Monster made over as a Brooklyner and Grimhilde renamed as “Katy” the witch. The appendices give additional helpful hints for non-sapiens just trying to get by.

Flann is the author of two short story collections, “Smoky Ordinary” and “Get a Grip,” as well as a writing guide, “Write On: Secrets to Crafting Better Stories.” Her advice column for aspiring writers appears quarterly at Stay Thirsty Magazine. “How to Survive a Human Attack” is her fourth book. She has lived in Baltimore since 2008.

Flann took some time away from saving the undead to chat with the Fishbowl. 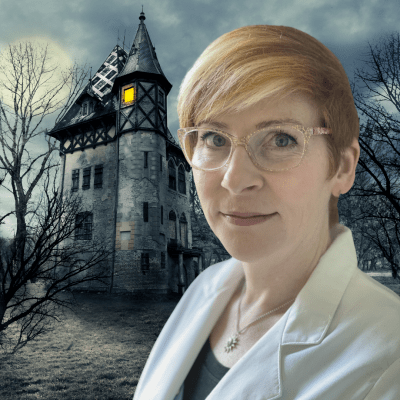 Baltimore Fishbowl: You began your writing career in fiction, right? What led you to humor writing?

Kathy Flann: It depends on how we understand the idea of “beginning” or “career.” As a college student, I enrolled in fiction workshops and, in my free time, I did open mic comedy. I was pretty interested in comedy, and when I graduated, I moved back home to DC and took a job answering phones at The Comedy Café, thinking to connect with people in the business. It turned out that the owner had a well-known strip club in the basement of the building, frequented by K Street lobbyists on lunch hour. I spent literally all my time in an attic cubicle answering the phones for the strip club, reading aloud from a chart on the wall the schedule of who was dancing that day – “Today, we have Bambi, Cha Cha, and Lola at 12:30.”  The experience got my imagination going, for sure, though maybe not the way I expected. I quit that job and went to grad school for fiction writing. I wrote short stories for a long time, and people often told me they were funny. The evolution back toward straight humor was slow and pretty organic, accelerating with the pandemic and the death of my father (as strange as that sounds). I probably needed a laugh and suspected other people might, too. The publishing markets evolved over time, too, and there are more outlets for humor writing.

BFB: Why horror? What is your relationship to scary movies and monsters? Do you have a favorite scary movie?

KF: I saw The Creature from the Black Lagoon in 3-D in a movie theatre when I was a kid, and it was a pivotal experience. My first published short story was called “Black Lagoon” – it appeared in Crazyhorse – and it was about a teen-aged couple, each grappling with grief over a death, going to see that film in a theater. The movie underscores the ways they struggle to help each other, kind of isolated while together, just the way that monster on the screen is isolated, no matter how he tries to connect with the people on the boat. That movie is so beautiful in those crisp black and white underwater scenes, and it’s also both campy and tragic. It has always haunted me.

BFB: Which of the monsters is your favorite and why? Which piece was the most fun for you to write?

KF: For all the reasons above, I love the swamp monster so much. He’s just this lonely guy who can’t figure out how to connect, so resorts to snatching people off the boat, which is where he gets into trouble. I figured he could just get some makeovers and then he wouldn’t have to kidnap anybody! When I saw the makeovers that Joseph McDermott – the book’s illustrator – created, I nearly fell over. They are so amazing. I think the swamp monster will be okay now. I really do.

BFB: Which section was the most challenging to write? Why do you think it was difficult?

KF: Of the ones that got included (some didn’t), one of the hardest to write was the chapter for nuclear mutants. At first, the editor was like, “I don’t get it.” And she was right. It wasn’t working. I knew that a big problem for a nuclear mutant was an ever-changing body. But beyond that, I wasn’t sure how to think about the situation. As with a lot of the early versions of the pieces, it began as an homage to the mutant rather than a survival guide, like here’s what you’re good at doing type of thing. But when the piece was in peril of getting cut from the book, I focused more intently on what the mutant’s issues were. And that’s when it hit me that the state of transformation created vulnerability, just like… puberty! So I read a bunch of puberty guides to get the feel for the style and message, and it started to come together. Those books are all about how you might feel independent and invincible because of the changes to your body, but you’re not and you should stick with your family. And it actually did parallel the nuclear mutant movies, so the chapter really turned out to be weird – like one of the weirdest chapters – and Joseph, the illustrator, leaned into that with kitschy old-school educational images, which is maybe why there’s been good feedback about it.

BFB: How did the book come together? When you began writing these pieces, did you think it would become a book? Did you always plan on having illustrations?

KF: Oh, this is such a long story, but I hope I can tell a short version. I started writing these when my husband was watching The Walking Dead. There was so much screaming. Those zombies were getting slaughtered! They need help, I thought. I wrote the first advice piece in response to that moment. Then, I got going on advice for different monsters, and I also wrote the “Compendium of Human Repellants.” I wrote a proposal for a book, which my agent at the time didn’t like. Then I found my current agent, who’s been steadfast in her support of this project for years. She had the idea to convert it to a graphic novel script and proposal at one point, which I did. When it sold to Running Press, my editor was like, “Can it NOT be a graphic novel?” And so, it reverted to what it was going to be at the beginning of the process – a prose guide. But I think having converted it to a visual form (and back again) gave the final version a far more visual quality than the original had. I had already thought of the whole book visually. I had even done some illustrations myself, even though I’m not very good at drawing. I think it turned out to be what it was meant to be, which is pretty cool, and it was definitely a team effort.

BFB: Is there a creature you wish you had been able to include? Any omissions of note? Will there be a volume 2?

KF: There were so many creatures that I had planned to cover, and I just couldn’t fit all of them into the book. I don’t know if there will be a volume 2, but there are certainly plenty of monsters who still need help, and there are many sequel jokes out there waiting. It’s sad when jokes just wander the streets unmade like that.

BFB: You publish your humor pieces under K.E. Flann, while your story collections were published under Kathy Flann. Why the change? Do you feel you are writing as a persona when you write humor?

KF: It’s a confusing thing, even to me. I mean, yes, the humor is always from the perspective of a persona. But on the other hand, fiction is always not me, too. What I can say for sure is that these forms –literary short fiction and humor — are different parts of myself, which is what’s behind the impulse to be me (not a total name change) but a different me.

The part I think is peculiar is that humor is categorized as nonfiction, so in a way, the expectation is that I am more me in this form than the other. Who knows? Maybe I am. But all naval gazing aside, can we just acknowledge this fascinating situation? A guidebook for movie monsters can be found in nonfiction sections of bookstores and websites everywhere. “Fact” is stranger than fiction. What could be better than that?

BF: What are you working on now?

KF: As my alter ego Kathy Flann (Dr. Jekyll?), I’ve been working forever on a series of memoir pieces about moving abroad alone with just my dog and some suitcases. The day we moved happened to be Sept 11, 2001, and we were in the air for most of that day, arriving to a changed world on the other side. That’s how our five years in the UK and France began. The dog was part of many poignant experiences, including that one. I’m an introvert, but she was an extrovert and often forced me into situations I would otherwise have sidestepped. She also saved me from a fire at the 150-year-old house I worked so hard to buy, using a backpack of cash for the down payment. Two of these memoir pieces have appeared in The Gettysburg Review, and I hope to collect all of them into a book. As someone who’s been in my writing groups, you’ve provided great feedback on these for years! Writing is always more collaborative than it looks, I think.

I’m also working on a novel, but I don’t have confidence as a long-form writer, so I’m nervous to say that I’m working on it because what if I don’t finish it? 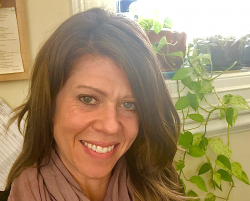 Elizabeth Hazen
Elizabeth Hazen is a poet and essayist whose poems have appeared in Best American Poetry, American Literary Review, Shenandoah, Southwest Review, and other journals. Alan Squire Publishing released her two collections of poetry, Chaos Theories (2016) and Girls Like Us (2020). She lives in Baltimore with her family.