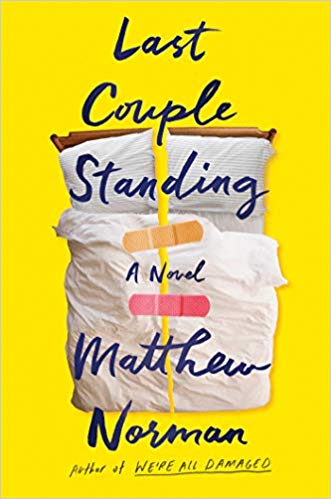 Calling all readers who have enjoyed recognizing Charm City landmarks in the novels of Anne Tyler – Matthew Norman’s entertaining new domestic comedy, “Last Couple Standing,” is Baltimore to the bone. While Tyler’s characters traditionally shop at Eddie’s on Roland Ave, Norman’s crowd has moved to the suburbs, so shop at Graul’s. But they frequently come into town for scenes at Bar Vasquez (where they reminisce about when it used to be Pazo), the Greene Turtle, Bond Street Social, Towsontown Mall, the Ivy Bookshop, the Under Armour store, the Senator Theatre, Tark’s, and more.  And they don’t need a GPS to get around. “In the city, Falls Road is as congested and annoying as any other street in Baltimore. In the suburbs, though it opens up into a scenic highway through horse farms, like you’re time traveling.”

To readers of a certain age – say late thirties, early forties – Norman’s story may feel just as familiar as his setting. At its center is a group known as the Core Four – four couples that have been friends since college days at Hopkins, all on the same track with marriage, babies, and now, it turns out, divorce. After fifteen years, Jessica and Mitch Butler are the last couple standing. And they come up with what the reader can recognize from a galaxy away as a really bad idea. Instead of allowing their marriage to succumb to boredom, as their friends’ have, they decide to suspend the rule of monogamy. Yes, that’s right. They decide to have sex with other people. They make a bunch of rules about it that they assume will provide damage control.

Aside from the pleasures of the main story, which include some pretty hot sex scenes, there are several interesting subplots. As Mitch and Jessica deal with the fall-out of their risky decision, we watch the other members of the Core Four navigate their early singlehood. As you might imagine, the rat’s nest that is online dating comes into play.

Here’s a Smalltimorean twist: Jessica is a therapist, Mitch is an English teacher, and both have the same bad-ass girl in their care: one Scarlett Powers. “Scarlett wasn’t the star of a comic-book-turned-action-movie, as her name might have suggested. Instead she was a private school-educated drug abuser, possibly a low-level sex addict, a petty criminal, and far and away Jessica’s most infuriating patient.” Scarlett goes to school with a nerd named Luke, who in addition to being Mitch’s student is also his next-door neighbor. Does this not sound like the town we live in?

As Kirkus Reviews would have it, “When all of those characters come together in the story’s climax, the result is a scene worthy of a Shakespearean comedy. A quick-witted and ultimately hopeful look at what it takes to make a marriage last.”

We caught up with Norman to discuss his third novel. 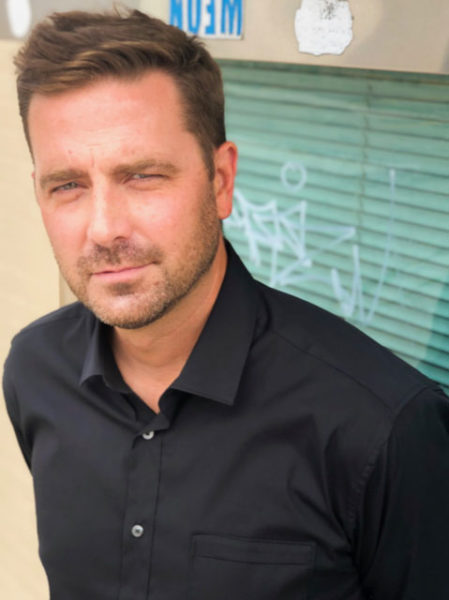 Baltimore Fishbowl: I have to ask, how could you addict your characters to Golden Oreos when you could have done Berger cookies?

Matthew Norman: I know, right? I should have my status as a Baltimorean suspended. I needed a more universally known cookie to make this particular cookie metaphor work, though. For, like, a hundred years, Oreos were the same old thing. Then, a few years ago, Nabisco started making different flavors—vanilla, hot & spicy, birthday cake, and on and on. For Jessica and Mitch, Golden Oreos become a symbol of infidelity. The publicity team at Random House sent out packs of Oreos with the advanced reader copies last year. I thought that was a nice touch.

BFB: Talk about your decision to recast ET as a horror movie, ruining childhoods in a way usually reserved for the movie of Stephen King’s It.

MN: Unfortunately, my wife and I lived this in real life. A few years ago, the Senator ran E.T. on a random Saturday morning for families. We took our daughters, who were six and eight at the time. We thought we were doing something nice—something wholesome and sentimental. It turned out, from their perspectives, E.T. was the most terrifying thing they’d ever seen. We’re talking nightmares for weeks, crying fits, legitimate emotional scarring. I couldn’t resist writing it into the book, because it was such a great example of good parenting plans gone awry.

BFB: The one Baltimore institution that seemed to be in disguise was “Ruxton Academy,” where Mitch teaches English. Is this actually Park?

MN: Not specifically. I’ve lived here for a long time, but I didn’t grow up in Baltimore, so I don’t have a relationship with any of the high schools. I’m fascinated by the private school scene here, though. It’s a whole subculture, and where you go matters to people in a way that I’d previously only associate with college. I liked the idea of the characters being in this environment, but I didn’t want to be beholden to the reality of any one school.

BFB: Are you worried that readers will assume this book is autobiographical, the way they often do with novels? Is Mitch you, even if his marriage is not yours?

MN: It’s a reasonable question, one that’s come up with my other books, too. This makes sense because I tend to write about characters who are roughly my age and in similar life stages. Mitch is no more me than my other main characters have been, but I don’t mind if people speculate. I just hope they like him—or, at the very least, sympathize with him. Plus, I’m taller than Mitch, and I can hold my alcohol better than he can.

BFB: I’m always interested in watching a writer’s development over the course of a career. Is there anything you learned from writing “Domestic Violets” and “We’re All Damaged” that came into play with this book?

MN: Those books taught me the limits of first-person narratives—particularly first-person male narratives. “Last Couple Standing” is a third-person book, and I can’t tell you how liberating it was to shift into different perspectives from chapter to chapter. For the first time, my female characters are speaking for themselves rather than communicating through the lens of a male narrator. As a writer of domestic fiction, that was an important step for me, one that I was excited to take.

BFB: Any hints about where you’ll go next?

MN: I just finished a draft of a new novel last month. It’s about four old friends who meet up on Fenwick Island in Delaware over Memorial Day weekend under dubious circumstances. It’s just a first draft, but I’m thrilled about it. The main characters are all from Baltimore again, so there are plenty more Charm City references. I’ll definitely work Berger cookies into the next draft. Those things are great.

Editor’s Note: The launch event for Last Couple Standing was scheduled at the Ivy Bookshop for March 17 — it became the first event the store had to cancel for the coronavirus quarantine.