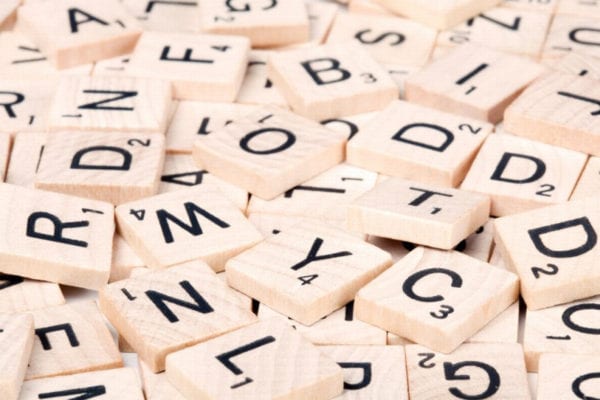 Because am I knee-deep in writing The Baltimore Book of the Dead, we’re reposting a column from the very early days of Bohemian Rhapsody — the third, in fact. The Baltimore Fishbowl was just a month old. My ex and I were having a little post-divorce relapse, as we learn at the end of the piece. That does seem like a long time ago. Since I wrote this, four new two-letter words have been added to the “secret language” of Scrabble: DA GI PO TE, appended to the official word list in 2014. I can only imagine what my mother would have to say about it. These days, it’s her namesake, my seventeen-year-old daughter Jane, who is kicking my butt. There’s no one I’d rather lose to.

Originally published June 22, 2011 – I was brought into the fold of Scrabble players in the mid-90s by a food writer boyfriend who kindly scooped me up and resuscitated me after my first husband died of AIDS. In addition to viciously competitive Scrabble playing, the food writer’s recovery program for dazed widows included extravagant piggery both at home and in restaurants, gin martinis, Camels, wave-tossed waterbed sex and the occasional brisk morning walk.

He taught me the basic two-letter words, which include the Greek letters (MU, NU, XI) and the notes of the scale (DO, RE, MI). AA, I learned, is a word, as are AB, AE, AI, and AL. Still, I never had a chance. He perceived me as being slightly ahead of him in the race to literary immortality and was therefore hell-bent on beating the pants off me every time we played.

We were watching the news together on Christmas Eve of ’94 when it was announced that the forthcoming fourth edition of The Official Scrabble Players Dictionary (OSPD4) would include QI, a term from the Chinese meaning “the vital force in all things.” Since there are so few words that use Q without U, we immediately permitted it in our games.

They sent out that press release a little early, I guess. Nine years later, when OSPD4 finally hit the streets, the food writer and I were long broken up. We never knew that the alternate spelling KI would be sanctioned, nor imagined ZA, perhaps the most important two-letter word in Scrabble, which debuted at that time as well.

The Z is a 10-point tile in Scrabble, and there’s only one of them in a set. It’s not the easiest letter to play. When a beginning player gets the Z, he sits with the tile on his rack until the other letters of ZOO or CZAR show up, then triumphantly slaps down his word. Trying to place the Z on a double- or triple-bonus square seems impossible.

If a seasoned player draws the Z, it’s another story.

“ZA?!? What the hell is that?” squawks the newbie, if not already completely worn down by words such as NE and JUPON.

“It means pizza,” says the old hand confidently, as if she has actually met someone in the history of the world who calls a pizza a za. The dictionary’s position is that it’s slang circa 1970. I dunno. I was twelve in 1970; it was the year I won a pizza-eating contest at summer camp in Massachusetts by consuming 17 slices, and I certainly never heard of it.

Once I became a Scrabble fiend, I was eager to play my mother, whose word game of choice was The New York Times crossword puzzle. She did the puzzle every day, and on the Sundays of my childhood, she and my father sat at the kitchen table with their heads bent over it together — perhaps their most harmonious and proximate pursuit.

In the 60s and 70s, before Will Shortz came to power on the puzzle page at the Times and retired the use of insanely obscure words and proper nouns, a maven like my mother had frequent recourse to her beat-up paperback edition of The New York Times Crossword Puzzle Dictionary. Here one could look up the arcane nomenclature of various flora, fauna, deities, rocks, towns, and so forth, in order to fill in the last few empty blocks on the page.

Of course, someone who did the puzzle as regularly as my mother had come to know many of these words as readily as Scrabble players whip out ZA and QI. My mother didn’t need a dictionary to tell her that ERATO was the muse of lyric poetry; OMOO, a Melville novel; ANOA, a small buffalo of the Celebes having small straight horns. I think she was just being nice when she gave me “Brian of Roxy Music” to solve. ENO had been in so many times, she surely knew.

Because my mom never doubted her puzzle words, as bizarre and unheard of as they may have been, I was surprised by her reaction the night I first got her to play Scrabble.

“These aren’t words,” she said, her thin Coral Cadillac lips narrowing to a line. “This is cheating!”

“But they are words!” I cried, showing her my beat-up paperback OSPD4. “They’re all in here! You can look!”

No one could argue with that. And as long she had the moral high ground, she lit up a Carlton Extra-Light 100 right there in the house.

Perhaps my mom was just too old to learn a whole new vocabulary. I had much better luck bringing in the stepdaughter I acquired in my second marriage. Emma, who was 11 when I began to teach her the game, began beating me soon after. The very words that irked my mother delighted her, and soon she was coming back from the Scrabble club at Carver sporting FUB and GHI. (Having spent years in a parochial school in Pikesville, she didn’t need the club word list to give her PE and FE, both Hebrew letters.)

Her father, from whom I am now divorced, rarely tolerated a game of Scrabble, and never again did a crossword puzzle with me after I once fed him a clue I knew the answer to (“Brian of Roxy Music?”). Well, I didn’t pay much attention to his magic tricks or bonsai trees or anarchist treatises, so I guess I deserved it.

Lately, however, after years apart, we’ve begun to remember all the things we did like about each other. These were good things, and I am happy to have them my in life again. OGL, as we called Our Great Love, has come back to us like a once-fluent second language, rusty from disuse but not lost altogether.

While in the meantime I’ve become addicted to single living and don’t believe I can go back the other way, I do nurture a Stephen King-type fantasy of caring for him in his declining years, forcing him to play Scrabble with me once he’s bedridden. Though since we are exactly the same age, it’s just as likely he’ll have me bonsaied to my wheelchair watching him do arm spreads with a Bicycle deck.

Marion Winik writes “Bohemian Rhapsody,” a column about life, love, and the pursuit of self-awareness in Baltimore. Check out her heartbreakingly honest and funny essays every month on Baltimore Fishbowl.