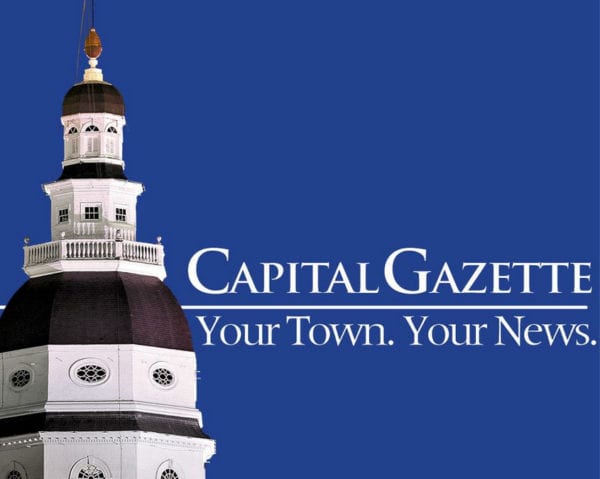 A white male walked into the offices of Capital Gazette Communications near Annapolis with a shotgun and opened fire, killing five people and injuring two others, Anne Arundel County Police said.

Laurel resident Jarrod Ramos, 38, was taken into custody by police and later charged with five counts of first-degree murder. Ramos had previously sued the company for defamation and lost.

“He entered with the building with a shotgun and looked for his victims as he walked through the lower level,” he said.

Cops and courts reporter Phil Davis described how the man shot through the glass door of the newsroom and began firing on employees.

A single shooter shot multiple people at my office, some of whom are dead.

Gunman shot through the glass door to the office and opened fire on multiple employees. Can't say much more and don't want to declare anyone dead, but it's bad.

Shortly after the shooting started, an intern tweeted out a plea for help.

A mother and son, who both declined to give their names, said they arrived at the building for a doctor’s appointment and heard three shots. Police told them to get down.

The mother said she “saw a lady laying on the ground.”

“She was shot in the stomach and that’s all I remember, I was running so fast,” she said.

Police found canisters from smoke grenades used by the suspect. The bomb squad determined they were not active grenades, and police spokesman Lt. Ryan Frashure said they do not anticipate finding more potential explosives.

No gunfire was exchanged when police apprehended the suspect, said Frashure.

Officers from several local departments arrived in the area within a minute to a minute and a half after the shooting was reported, a coordinated effort that Frashure said prevented the incident from being more deadly. Nearly 170 people made it out of the building safely and were directed to a reunification center at nearby Westfield Annapolis Mall, he said.

At least 10 different agencies, including some federal organizations, helped with the initial investigation.

Police are working to obtain a warrant to search the suspect’s home. Krampf told reporters about threats made to the Capital through social media but declined to offer specifics. Investigators are working to confirm the owner of the account that sent the messages, he said.

Authorities have reopened the area around the building, but Krampf said the office building where the shooting took place will remain closed for an undetermined amount of time.

“It’s a tragic situation, but there were some very brave people who came in and kept it from being worse,” said Hogan.

Comprised of The Capital, the Maryland Gazette and several other local papers, Capital Gazette Communications is now owned by Baltimore Sun Media Group. Police also responded to The Sun’s building at 501 N. Calvert St. shortly after the shooting started near Annapolis. On the scanner, there was some confusion among police officers about whether there was a shooting at The Sun.

Baltimore Police Department spokesman T.J. Smith told The Sun‘s Colin Campbell police sent the SWAT team in to clear the building. There was never any threat, he said.

Phil, I can’t imagine what you and the entire Capital Gazette team are going through right now. Journalists shouldn’t have to fend off bullets in the newsroom while doing their jobs—this is not normal. Stay strong. https://t.co/hchUMIaMN1

Chase Cook, a reporter with Capital Gazette who said he was not in the building at the time of the shooting, pledged this on Twitter:

I can tell you this: We are putting out a damn paper tomorrow.

Joseph M. Giordano contributed reporting. This story will be updated.