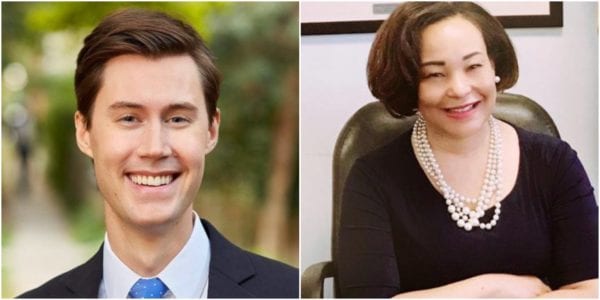 A new ad from the campaign of Martin O’Malley son-in-law and 41st District Senate candidate J.D. Merrill has drawn the ire of opponent Jill Carter, as well as a couple black community leaders and one city councilman.

The 15-second spot hinges on allegations that Carter missed a hefty number of votes during her first stint in Annapolis, where she served as delegate for the 41st District for 14 years.

Where was Jill Carter?

We deserve a Senator who works as hard as we do.

“Where was Jill Carter?” a female voice poses. “As a delegate, Jill Carter had the worst attendance record of any member of the Baltimore City delegation.” The ad references a 2006 story from The Sun about Carter receiving a “Crabbie” award, a disparaging recognition from a former watchdog group called the Maryland Accountability Project, which tallied up legislators’ missed votes.

It also cites a Sun story from this spring that paraphrased former Sen. Lisa Gladden saying Carter did not work hard in her former delegate post, an accusation that Carter disputed as an “absolutely absurdity” in the same story.

“We deserve a senator who works as hard as we do,” Merrill’s campaign ad continues. “Vote for J.D. Merrill, a former teacher. J.D. Merrill shows up, works hard and gets the job done.”

The ad is the first known attack ad in the Democratic primary Senate race in the 41st District, which includes parts of Northwest, West and North Baltimore. Carter is already serving in former Sen. Nathaniel Oaks’ place after being appointed to the seat in late April by Gov. Larry Hogan, but is seeking re-election in November. She previously served as director of Baltimore’s Office of Civil Rights and Wage Enforcement in Mayor Catherine Pugh’s administration, a position she accepted after resigning as delegate in late 2016.

In a post to her public Facebook page, Carter offered her own barbs for Merrill, calling him “unqualified” and “a coward,” and his ad “dishonest.”

“‘When they go low, We go high!'” she wrote, quoting former first lady Michelle Obama’s 2016 Democratic National Convention speech. “Only a coward with no record would resort to attacks over issues. Let’s stick to the issues… and my real record as a champion for people and for justice please. Let’s fix the 41st district and make it work for everyone! Thank you!”

Others weighed in to support Carter. Erricka Bridgeford, co-creator of the now-famous Baltimore Ceasefire movement, commented on the Merrill campaign’s video on Facebook, “She was in the streets, fighting for the people, like she always does.” She also defended Carter’s record of fighting against mass incarceration, a consequence of Martin O’Malley’s zero-tolerance policing push from his time as mayor of Baltimore.

“A smear campaign against another candidate does nothing to show us why we should vote for you,” Bridgeford wrote. “It just shows us that you’re a very petty and ‘scared to lose’ guy.”

Dayvon Love, public policy director for the nonprofit think tank Leaders of a Beautiful Struggle, wrote that the ad relies on “the racist troupe of the lazy Black woman that does not work hard.” He echoed Bridgeford’s point about Carter previously fighting against O’Malley’s zero-tolerance policing strategy, and criticized Merrill for branding himself as a progressive while running against Carter, who he said “is widely recognized as the most credible legislator on issues of racial justice in [Maryland].”

As a 36 year old white dude who branded myself as progressive throughout my campaign for office, I concur with @DayvonLove.@jillpcarter for Senate. https://t.co/AfR3jebxYy

Merrill, a former special assistant to the chief of staff in Baltimore City Public Schools and Teach for America alum, launched his campaign for Senate in January. He’s married to Grace O’Malley, daughter of Martin O’Malley.

In an odd twist, Carter and Merrill have some competition from a disgraced incumbent who’s not even actively campaigning. Oaks resigned from the Senate in March after pleading guilty to federal corruption charges, and has fought in vain to have the state remove his name from the ballot.

An Anne Arundel County Circuit Court judge initially refused to remove Oaks’ name because Oaks had already filed with the State Board of Elections and remained eligible, despite his conviction, because he hasn’t been sentenced. The judge reversed his decision after Oaks forfeited his voter registration, but the State Board of Elections appealed the ruling, saying it had already ordered ballots with Oaks’ name on them and that removing it disrupt the election process.

Maryland’s top court this month sided with the elections board, meaning Oaks’ name will appear as an option alongside Merrill’s and Carter’s during the primary on June 26.