Baltimore’s Bike Share is Back Up and Running, With More Stations to Come 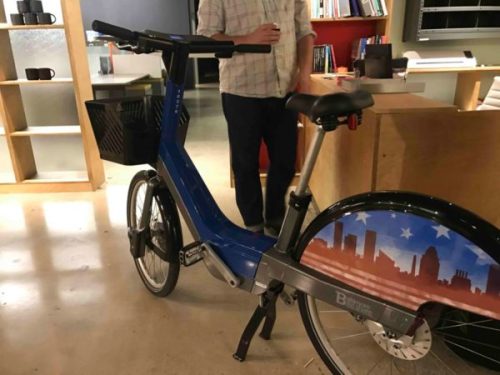 After temporarily shutting down this fall, the Baltimore Bike Share is planning to end the year by adding more stations.

END_OF_DOCUMENT_TOKEN_TO_BE_REPLACED

After a month-long hiatus for some crucial repairs and maintenance, Baltimore Bike Share is returning this weekend.

END_OF_DOCUMENT_TOKEN_TO_BE_REPLACED

Baltimore Women Take on a “Crazy” Bike Ride for Charity

Most weeks, Lee Daugherty wakes up and heads to Johns Hopkins where she’s on faculty and conducts research on disaster planning. But next week, her days will be spent a little differently. Daugherty, along with 10 teammates, will be riding all the way across the state of Maryland — a total of 365 miles — to raise money for charity projects in Malawi and Cambodia. “We’re willing to do something a little crazy,” Daugherty says. “Because that’s how important it is.”

END_OF_DOCUMENT_TOKEN_TO_BE_REPLACED Sometimes, the internet is really cool. Take, for example, these maps — or are they paintings? — by Baltimore resident Michael Wallace. Fusing GPS technology, detailed city maps, his bike, and a sense of whimsy, Wallace creates what Nate Berg, writing in the Atlantic Cities blog, calls “a city-scaled and semi-crude Etch-a-Sketch drawing [with] Wallace [as] the pinpoint drawing the line.” Except that, unlike Etch-a-Sketch art, Wallace’s “drawings” are often miles wide, and take a few hours to complete.

So far, Wallace has come up with 120 ride/drawings, most of them through his Southeast Baltimore neighborhoods. Some highlights have included sailboats, trains, monsters, and a level of Donkey Kong. Baltimore’s gridded layout makes some of the more complex drawings a challenge, but he’s learned how to shape lines by taking turns at either wide or narrow angles. Patterson Park’s wide open spaces also help with the creative process. Still, Wallace — a middle school teacher by day — knows he must look a little kooky to other cyclists, since he ends up having to do a lot of zigging, zagging, and doubling back.

Once school is out this summer, Wallace will have more time to devote to completing his next batch of rides. He’s got several already sketched out, including one with an ambitious Crocodile Hunter-theme. Check out some of Wallace’s other inventive bike sketches below:

END_OF_DOCUMENT_TOKEN_TO_BE_REPLACED

Ciclovia, How I do Love Thee

Ciclovia, (pronounced: seek-low-VEE-uh) how I do love thee! You are one of the most fun events that take place in Baltimore all year, and you take place just feet from my door.

And this spring, ciclovia, you take place on a Saturday, NOT on a Sunday:  Saturday, May 5, from noon to 4 p.m.  What a civilized hour.