Baltimore’s not the only city dealing with a rising murder rate, but it does stand out

A newly released FBI report indicates violent crime rose across the United States in 2015. Murders increased by nearly 11 percent and violent crime overall increased by almost four percent, ending a two-year decline in total violent crimes. In Baltimore, the jump was over 60 percent.

END_OF_DOCUMENT_TOKEN_TO_BE_REPLACED

Earlier this month, Baltimore reached a tragic milestone: The city now has its highest-ever per capita murder rate, with more than a month still left in the year. Across the nation, experts are scrambling to explain just how and why that happened.

END_OF_DOCUMENT_TOKEN_TO_BE_REPLACED

With 305 murders in 2015 so far, the city now has its highest-ever per capita murder rate–worse than during the early 1990s, which are often considered to be Baltimore’s most violent period.

END_OF_DOCUMENT_TOKEN_TO_BE_REPLACED

I waited until today to make sure that this wasn’t an April Fool’s joke, but it appears to be true: Baltimore City’s homicide tally in March was seven, the lowest monthly total in more than 30 years. And that is amazing news.

END_OF_DOCUMENT_TOKEN_TO_BE_REPLACED

We already know that Baltimore is one of the most dangerous cities in the United States, but according to a recent global study Baltimore is also among the 50 most violent cities on the planet, with more murders per capita than Durban, South Africa, as well as several Latin American cities. What’s worse, the ranking is based on numbers from 2012, for us a marginally less violent year than 2013.

Our 35 homicides per 100,000 residents places us far behind the most homicidal city, San Pedro Sula, Honduras, with 169. But come on, let’s get off this list entirely.

END_OF_DOCUMENT_TOKEN_TO_BE_REPLACED

What Will Baltimore Be Known For Now That We’re No Longer a Murder Capital?

New Orleans. Flint, Michigan. Detroit. St Louis. Newark. Each of these cities experienced more murders per capita in 2012 than Baltimore did. Which means that Baltimore is no longer one of the FBI’s top five deadliest cities. (We’re number six.)

We still have far more than our share of violent crime (though our per capita murder rate has, like Detroit’s, been slightly inflated when compared with cities whose borders have been expanded to include outlying suburban areas )  but looking optimistically toward the future, what will be Baltimore’s “brand” when we are no longer a murder capital?

END_OF_DOCUMENT_TOKEN_TO_BE_REPLACED

Not in the Top Five Deadliest Cities Anymore? Not Bad, Baltimore

I have a friend who likes to say she came to Baltimore for the murders and stayed for the heroin. I’m not sure how many more like her are out there, but they might want to move elsewhere, now that Baltimore has dropped off the list of the nation’s five deadliest cities.

The announcement comes from data compiled by the FBI in 2011 and released this Monday. The city’s murder rate dropped 12 percent last year, with the total number of homicides coming in at 196. That’s an average of 31.3 killings per 100,000 people, which isn’t great compared to Philadelphia (21.2) or New York (6.3), but still an improvement for Baltimore, which saw 282 murders in 2007 alone. 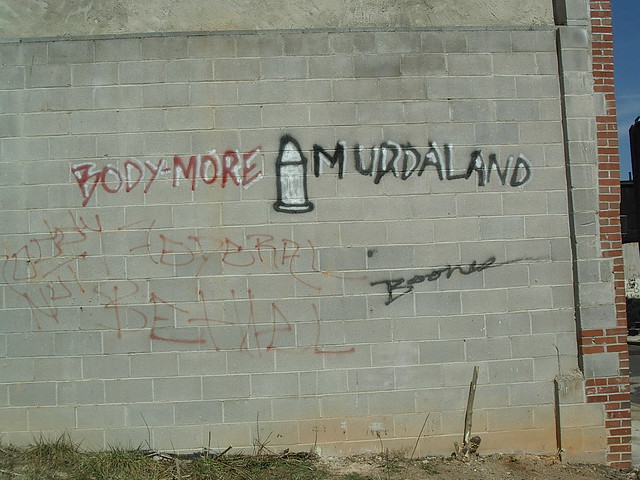