What would you think if someone said you could buy a house for just a dollar? That there would be all sorts of strings attached? That it would be a dump? That you would be an urban pioneer? All of those would be correct. 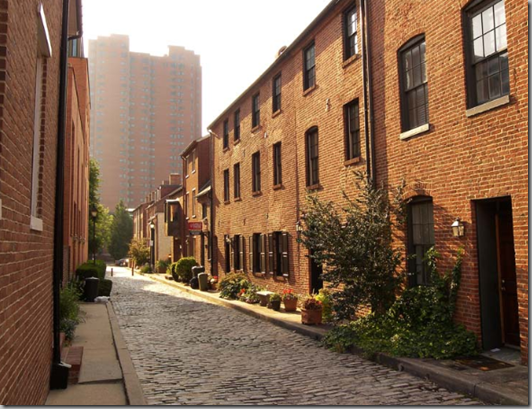 END_OF_DOCUMENT_TOKEN_TO_BE_REPLACED

What’s Next for North Avenue?

Courtesy of Bmore Media – North Avenue, like much of the Station North Arts and Entertainment District, gets a lot of its buzz from its nightlife and reputation for a thriving underground arts scene. Poetry readings at theWindup Space, music and pizza at Joe Squared, a play at Single Carrot Theatre or a drink at Liam Flynn’s Ale House might be a typical night out for twenty-and-thirty-something hipsters.

END_OF_DOCUMENT_TOKEN_TO_BE_REPLACED

Baltimore’s love for urban rehab can feel unseemly; veil of chic aside, Woodberry’s broken windows still conjure the blight of hard times past.  But neighborhood reboots also do a world of good, often throwing each area’s innate style and aspirations into sharp relief.  When the Inner Harbor and Harbor East began to rebuild, they peppered the waterfront with tourist bait, such as swank cineplexes and paycheck-chewing eateries.  Meanwhile, Hampden and Fells Point have both staged boutique revolutions, transforming their quiet storefront strips into bustling meccas of quirk and class.

Still, some neighborhoods beg a subtler facelift than others – Remington, for example.  A residential salad of schools, parks, and playgrounds built around a core of auto shops, the area has long been a model of nondescript living, housing blue-collar families and lifers, as well as a persistent (if nonviolent) mix of daylight drug deals and boarded buildings.  Neither a Wire-style war zone nor a bustling nexus of commerce, Remington kept to itself.  So when gluten-free bakery Sweet Sin arrived in 2010, it raised many a local eyebrow.

END_OF_DOCUMENT_TOKEN_TO_BE_REPLACED

Part three of our series on 80-year-olds who still live life to the fullest.  Look for the final installment on Thursday, November 17. The Eds.

In the case of eight Baltimoreans, age 80 seems to be the new 64. These eight men and women remain active in work and in Baltimore.  Although official retirees, they could hardly be considered “retired.”

While Americans are often labeled workaholics, these eight fall into another category. They are still following their passions, passions born sometimes in childhood, others at mid-career. All have received numerous awards for their achievements, some honorary doctorates. While they say they have slowed down physically, all push themselves with regular exercise. All are fully engaged mentally.

Most, in the course of their lives, have had to overcome discrimination because of race, creed or gender. One of these giants said of his peers, “We were fortunate. The world changed so much in our lifetime.”

Three are over 90 and were alive during World War I. All lived through the Great Depression, World War II, Korea, Vietnam and the civil rights movement. These eight have experienced the proliferation of the automobile, air travel and computers. They are connected to a world and to times that most of us alive today have not known. Our Baltimore is different because of their work in the past and their work today.

Career, Present and Past:
At 85, Martin Millspaugh, has returned to his roots as a writer. After becoming “sidetracked for four years” making the television documentary Global Harbors, he’s on chapter 13 of a 16-chapter book, whose working title is A New City in Town, a History of Baltimore’s Inner Harbor.

Millspaugh’s first career as a journalist began at The Richmond News Leader. Later, his writing at The Evening Sun turned him into an expert on the then-new concept of urban renewal. As the Baltimore City Hall reporter he covered urban planning issues and was the author and editor of “The Human Side of Urban Renewal.” The combined expertise lead him to become the Assistant Commissioner of the newly created U.S. Urban Renewal Administration under Eisenhower, even as an unwavering Democrat.

In 1965 he began a 20-year career for which he is known internationally. As founder, president and CEO of Charles Center – Inner Harbor Management, Millspaugh “watched every brick go into place in Charles Center and the Inner Harbor… [and] had more to do with it than anyone else…” noted The Baltimore Sun on his retirement. During his tenure, Charles Center and the Inner Harbor received 44 national and international awards and was deemed by the American Institute of Architects as “One of the supreme achievements of large-scale urban design and development in U.S. history.”

Millspaugh’s second 20-year career, as executive vice president, president and vice chair of the Enterprise Development Company, focused on taking Baltimore’s revolutionary Inner Harbor development worldwide, either as a developer or as consultant.

Now in an immaculately organized office at Roland Park Place, Millspaugh writes the history of the greater Inner Harbor on his computer. “It’s fun reliving those days,” he says.

Key to longevity of engagement: “If I have any talent, it’s being able to take in information and synthesize it, use it to create a plan and to implement what is necessary. It’s the problem-solving process that I like best.”

Current Challenge: “Getting it down while I still have time.  It’s a huge volume of information.” Plus 3,000 photos to cull through and select for the book, whose publisher is still undetermined. “I love to play golf, but I like this better.”

Career, Present and Past:
After finishing chemotherapy and radiation in June for a second bout of lung cancer, Iris Rosenblatt completed in September the Swim Across America one-mile benefit swim for a second time. A lifelong recreational swimmer, she swam to benefit the Sidney Kimmel Cancer Research Center. At 81 Rosenblatt has had emphysema, melanoma, and previous cancer in the other lung. “I swam because it’s a good cause. They need more research.  When I see 40-year old people dying of cancer, it’s heartbreaking that they can’t be saved.”

Last winter, as Rosenblatt was headed with fellow senior swimmers to Arizona for the over-80 division, a routine x-ray revealed lung cancer in the opposite lung. “I didn’t need all of this,” she says, but undaunted, she underwent treatment, swam, worked out and did Pilates when she could.

As soon as her treatment concluded, she returned to her normal, daily routine of driving to Meadowbrook Aquatic Center and swimming every morning at 7 a.m. “I used to play to tennis. When I couldn’t play anymore [because of emphysema] I concentrated on swimming.”

Cancer is just one challenge Rosenblatt has faced in her lifetime. One of a handful of women in her law school class, she married, had three children and a private practice specializing in real estate and criminal trials. “‘Little lady’ they’d call me. ‘Come see HER,’ they’d say,” when she tried criminal cases.

After getting divorced at 33, she worked as an Assistant City Solicitor involved in litigation and opinion-writing, later at the Highway Acquisition Division of the City Department of Public Works and as a closing attorney in the Baltimore Area Office of the U.S. Department of Housing and Urban Development.

While training for this year’s benefit swim, someone suggested she didn’t have to finish.  “I will not quit,” she says. “If you say you’re going to swim a mile, you swim a mile.”

Key to Longevity of Engagement: “I was born this way. I’ve always felt: enjoy life, do good. People don’t realize we’re not going to be here forever…I like to laugh and make everyone feel good,” she says passing cookies she just baked. These are not just any cookies; they are made from scratch and are anatomically correct men and women, “My nude cookies, or Adams and Eves, my neighbors call them.”

Current Challenge: “To stay healthy. To get some energy. After Swim Across America I’m getting in shape for the next. Hopefully it [cancer] won’t come back…Every day is a gift.”