Fiction writer Michael Downs recently received the largest Individual Artist Award given by the Maryland State Arts Council. In this frank yet philosophical talk, he ponders the role of art in a world rampant with violence and tragedy.

What follows is adapted from remarks made at the Maryland State Arts Council’s reception for winners of 2013 Individual Artist Awards. This year, the state government supported 87 Maryland artists, writers, and performers. The reception was held May 20 at the American Visionary Art Museum in Baltimore.

Moments before, they had been running: Nike, Adidas, and Under Armour laced in tight knots across their unhappy feet, feet which had complained at Mile 11 or 18 or 22, but hurt no longer because this was the finish and nothing hurt anymore, not their crunchy ankles or their sore knees or that sharp cramp felt near the heart just a few strides ago. Those quicker runners who had already arrived ate bananas and smiled for cell-phone cameras, hands upraised and fingers making a V for victory, not for peace, not really, though peace is a thing much wished for, a thing on which so much depends.

About that time–a writer who works in the office of the Maryland State Arts Council typed an e-mail: a job to be done, a small task to cross off the list that described her busy day. She hit send, sped her note through the ether toward me, asking would I speak? Would I say something?

At the time her note arrived I was with those who watched, who sat at computers and before television screens, who felt the dread, the anger, the horrible familiarity of fresh violence surprising us again, as it had in Tucson, and Aurora, and Sandy Hook. Why are we always surprised? Thank God we are always surprised.

“I’m very happy to let you know that we’d like to invite you to speak,” read the e-mail.

I was watching Boston, and thinking of my friend the journalist covering the marathon, who had via Facebook told of explosions and a lockdown at the press hotel. I was thinking of Sandy Hook, and of Oklahoma City. Of a church in Birmingham. Of so many other times when neighbor has visited violence on neighbor. I thought back to Hartford, Connecticut, my hometown, where nearly 70 years ago someone lit a paraffin-coated circus tent on fire during a matinee performance. It was mass murder by arson. One hundred 68 people died. Thousands more were injured. The terror was not so selective; it found everyone.

I wrote a book of fiction inspired by that event. In the book, a character who survived Hartford’s circus fire, says this about his mother: “From her I learned that the redeeming currency of old pain is drama.” Though I wrote his line and believed it when I first typed it, I wonder now whether it’s true. Does drama, which stands in for all types of art, really redeem pain? To redeem is to compensate for loss, and it seems to me that drama, literature, song, an image on canvas, hardly compensate for the kinds of loss we saw in Boston.

So, maybe it’s not the job of art to compensate for loss. What then could I say about art? The question troubled me, as I watched paramedics carry people, saw bits of paper blow across Boston’s empty streets.

As a writer, I am drawn to pain. My own recent work, pages of which I submitted to the state arts council with hope of a grant, is, broadly, a novel about pain and solace. My inspiration again comes from my hometown and a dentist, a person who really lived—from 1815-1848—and who made it his life’s goal to keep his patients from feeling pain when he dug into their gums and wrenched out their teeth. He was among our first anesthesiologists, if history is to be trusted, perhaps the first to discover that pain could be annulled during surgery. His vapor of choice was nitrous oxide, though he later fooled around with ether and chloroform.

He first publicly exhibited his discovery in Boston, a few blocks from where the Boston Marathon now ends. I think of that when I consider the people who suffered in the explosions. I’m relieved to know some pains can be destroyed, at least for a little while.

As a writer, I create pain. In the first chapter of my manuscript novel, weeks before my dentist will discover the power of nitrous oxide, he pulls a girl’s tooth. The girl’s mother tells him, “If you can endure her carrying on, she’ll endure whatever you do. She’s known worse.”

Then he squeezes open the girl’s jaw.

But here is the paradox. Though I create pain as a writer, when I feel it or see it in others, I turn to art. Even as I watched Boston, and wondered what art can do, I recalled how W.H. Auden famously elegized his fellow poet, William Butler Yeats, by writing that

… poetry makes nothing happen: it survives

In the valley of its making where executives

Would never want to tamper, flows on south

From ranches of isolation and the busy griefs,

Raw towns that we believe and die in; it survives,

A way of happening, a mouth.

The raw towns that we believe and die in. Auden is writing about Boston. But also about Baltimore. Annapolis. Frostburg. Princess Anne, Ellicott City. Our poetry (by which Auden means all art, I think) comes from such places. It has an origin, a birthplace. Beyond that, Auden tells us, there’s not much more to say. Except that having been born, art survives.

When compared to making things happen—to securing the peace, to alleviating pain, to feeding the hungry­—surviving doesn’t sound so impressive.

But here at the Visionary Arts Museum is a sculpture, a self-portrait an anonymous man fashioned out of a fallen apple tree. The sculptor was institutionalized in Britain, suffered from tuberculosis. The story is that he’d never made art before he discovered that tree. After he finished his sculpture, he never made art again. He’s dead now. But there is his work, kept safe here in Baltimore, and every time I visit that building I stand near the sculpture. Something in me opens, and then there is a change, as if the sculpture has given me something. What it offers feels lasting.

After my grandfather–whom I loved profoundly–suffered his first major stroke in a state more than a thousand miles away, I found myself at 2 a.m., lying on a couch, reading the Irish writer John McGahern. It seemed all I could do, and it was enough. The book felt solid in my hand. The words, the lives they described, would not go away. And as McGahern’s art would survive, something in me did also, and I felt glad to be alive, in spite of it all. This is not redemption I’m talking about, not even consolation. It is something else, more like communion, a sharing of some intimacy, and it is necessary, and it endures.

Tonight we celebrate those among us fortunate enough to be makers of art. We congratulate and encourage each other.  I am glad to be among you, grateful for the panels of artists who reviewed our work, the administrators who organized that review, and the people of Maryland who funded it, who have decided to make the creation of art a priority, who have recognized its value.

Auden says art makes nothing happen, but then describes it as a way of happening, a mouth that survives, which means it is the part of us that goes on speaking, that defines, that works to express our pains, our questions, our consolations, our joys. Art works to shape the experiences we cannot hold in our minds. It explains how a celebratory afternoon in Boston becomes carnage, and how that carnage becomes, once again, the every day life in which we send e-mails, and run through the rain, and wrestle with a dog over a chew toy, gather with old and new friends, and feel gratitude. So here, grateful for this opportunity to speak to all of you, I thank our neighbors in all those raw towns who help fund what we do, who want it to survive. But mostly I thank you, individual artists, for being a way of happening, for speaking out of your mouths in your idiosyncratic voices and sharing over and over something necessary and lasting.

Michael Downs’s most recent book is The Greatest Show: Stories. He is an associate professor at Towson University and a recipient of a 2013 individual artist grant from the Maryland State Arts Council. He can be reached via his website. 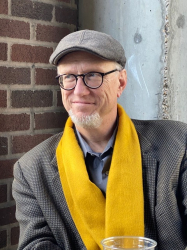 Michael Downs
Michael Downs, a U.S. Fulbright scholar in Krakòw, is on leave from his work as director of the graduate program in professional writing at Towson University. His most recent book is a novel, The Strange and True Tale of Horace Wells, Surgeon Dentist. Visit his web page at michael-downs.net.