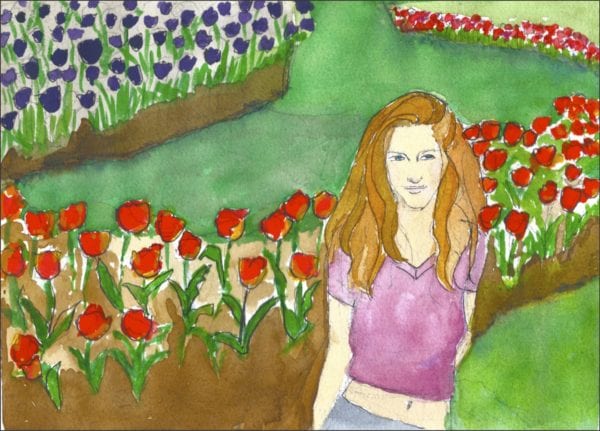 Last month I got a whole column out of the idea that I had nothing to say, and I still feel that way, only more so. The mental disconnect continues. Perhaps you know what I mean.

I found myself thinking about something the poet William Stafford wrote in his essay, A Way of Writing. “A writer is not so much someone who has something to say as someone who has found a process that will bring about new things he would not have thought of if he had not started to say them.” In this month of blankness and difficulties, I searched for such a process to guide my way. Stafford’s own approach, daily writing pages, seemed unlikely as I felt unable to put together even one honest sentence.

On the other hand, nonverbal production was going more smoothly. At the start of the quarantine, the watercolor class I was taking at the Baltimore Academy of Illustration with a very dear man named Scott Fuqua moved from once a week in a studio on Bellona Avenue to twice a week on Zoom. The class was supposed to end the third week of April, but no one could bear to let it go, halfway through our crows and elephants and city skylines. By the end of the first week, watercolor class had become a lifeline. Pre-COVID, people mostly just sat and worked. Now it’s like an ongoing quarantine therapy group, though the conversation is significantly more relaxed than the usual Zoom forced march. If you don’t want to talk, you can just paint, and listen. When you need help, Scott will try to show you what to do, though I have to say I liked it better when he could just grab a brush and fix it for you.

In any case, instead of writing something and drawing pictures to go with it, this time I made the pictures first, and tried to find out what they were telling me. It was all incoherent thoughts and uncooked emotional issues, so I turned to poetry. Formal poetry, which holds your hand every step of the way. A sestina, the form I picked, is almost a kind of sudoku with words. You just keep rearranging the elements, trying to get it to add up.

Specifically, a sestina has six stanzas of six lines each, and a seventh with three lines. The lines of each stanza end with the same six words, only in a different order each time. The order is prescribed so that the last word of one stanza is echoed in the first line of the next (full scoop here.) I’ve written only one sestina in my life, or almost wrote one, because I just looked at it and realized I didn’t quite follow the rules. What a surprise. It was 1978, a time of little rule-following in my life. The sestina was about my visit to the former Yugoslavia, though I notice I didn’t include the one part of the trip I still remember – stepping on a sea urchin in Dubrovnik. (“The Perfect Holiday Country” is here, pp 30-31.)

My daughter is developing negatives in the bathroom, I’m recording segments for the radio in the linen closet, last month, we had a houseguest practicing arias in the basement. Make stuff, it helps. 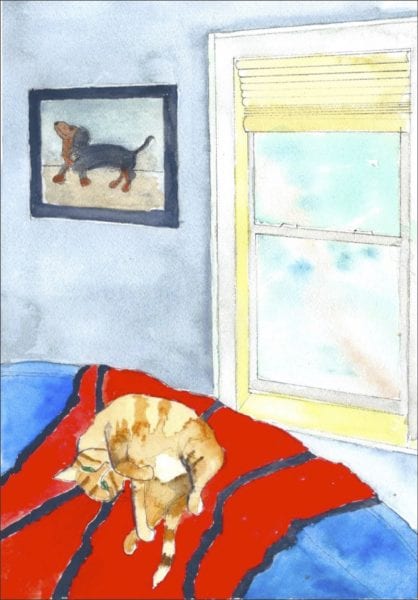 Things to Do in Quarantine

My daughter suggested Killing Eve, with its lovely assassin, Villanelle, and I found
myself thinking of poetic forms, ghazals and terza rimas. With its repetition and rules
sestina is the art of quarantine. This daughter, who never exercised outside
of gym class, is now running for miles, doing yoga and pilates, applying masks
and serums, preparing for a beautiful future with clothes and boys.
What’s new, pussycat? More YouTube, more Zoom, more books and home

cooking, handmade wontons stand strong against tedium and despair. Stay Home,
Stay Safe, Wash Your Hands, Take Off Your Pants. Turn on the TV and pledge newfound allegiance to State Farm and McDonalds. Be together apart, stir-fry the new
normal, celebrate heroes with Free Taco Tuesday. First responders rule.
My daughter and I walked to the public gardens, full of tulips and couples in masks.
As any dog can tell you, it’s just so good to be outside.

Get this: I was scheduled for knee surgery this summer, now there’s an outside
chance I’ll be replacing my own patellas and femurs right here at home.
I’m in med school at the University of Google, have my surgical mask.
Until then, it is Saturday, unless it’s Sunday or Thursday. Like Apple, I’ve found
two-factor verification is best. The pill-sorter and the garbage truck. The rule
ran away with the exception. Nowadays people are burying old hatchets, says The New

York Times. Sadly, others are digging up those hatchets or making hatchets anew.
Sleeping dogs + crowded quarters = quarantine apocalypse. Outside,
the night sky with Mercury in Aries; a Scorpio moon gets stuck in transit. Ruled
by Venus, sensual Taurus folds her sorrows into a meringue and celebrates at home.
Sixty-two! Yowza! I’ve ordered felt-tip pens and a one-egg fry pan. Lost and found:
The cat, a sense of self, the original cast album of “Hair.” Underneath this mask

I am smiling at you, old friend, I wish you could see it. Still no masks
in my dreams, but last night I did receive a Zoom invitation. Sailing to the new
world in my 1950s boat, I hit the gulf stream of consciousness, and I foundered.
Mayday, Mayday, Mayday. My cousins had to stand outside
the window of assisted living to get a last glimpse of their father. They went home
without telling Aunt Joan, who is in memory care. Despite the new rules,

four instead of three were permitted at the burial, and the bending of this rule
appeared unto them as a blessing. They stood in their yarmulkes and N95 masks
around the grave of their father, and each told a story. Their elegant childhood home,
his box seat at the Meadowlands. At 97, imagine finding a new
way to die. I know my mother would be interested in discussing this. Outside
on a sunny golf course in another dimension, perhaps she can be found.

Here at home, we have just a few rules:
Whatever you’ve found is yours to keep. Don’t jump. Unmask.
My daughter will take your new headshot. Meet us outside. 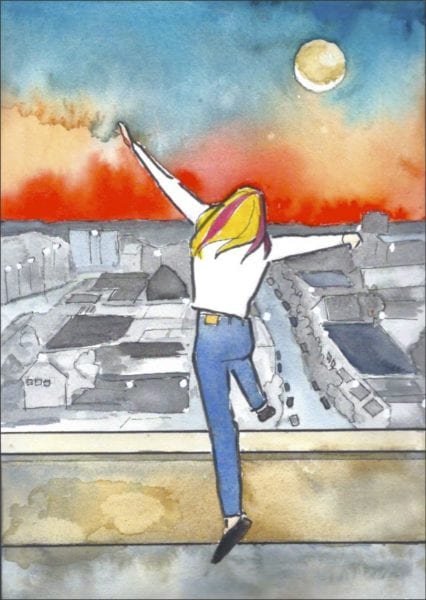