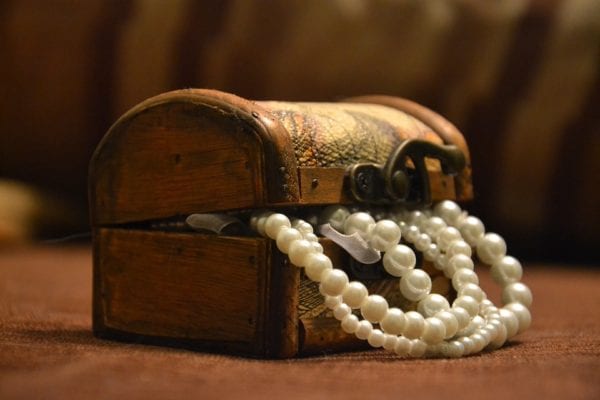 Leaving the Amtrak waiting area at Penn Station, New York, a few weekends ago, I walked away from my wallet. Technically speaking, it’s a clutch, big enough for credit cards, cell phone, cash, driver’s license, checkbook, keys, ATM cards, and yes, it was all in there. I was so intent on hustling my daughter and self onto the train, that I somehow lost track of the wallet. It hit me as we were getting settled into our seats. There was possibly enough time to sprint back upstairs to the waiting area. I got off the train to consult with the conductor who’d taken my ticket on the platform. He pointed to the end of a long line of passengers. “I’ll get to you when it’s your turn, ma’am.” I’d left my daughter on the train and had nothing but my ticket in hand. If I went back up and the train left and my wallet was already gone, I’d really be up a creek.

I got back on. My daughter, more self-possessed at that moment than I, reminded me that her godmother was booked on a train just an hour behind us. She’d be arriving at the station any minute. She’d text Godmother and ask her to look in the waiting area. Our train pulled away from the station. No cell service in the tunnel. Ten minutes out of New York, she got through and handed the phone over to me. I stayed on the line while Godmother checked the waiting area, asked at three information desks, and found her way to lost and found, all of which turned up nothing. I was still on the phone with her when she discovered a second entrance to the waiting area–maybe this side—by the escalator?  Yes! Hanging by an ear, I heard her asking people if she could look under their seats, move their bags, if they’d seen anything. A man had seen a cleaning woman picking up around the seats.

Armed with the briefest description of this woman, Godmother hastened to the Amtrak waiting room agents to ask if they could locate her. They summoned the cleaning crew supervisor who found the cleaning woman and a translator because she didn’t speak English. The cleaning woman claimed she had not found a wallet. “She’s saying I don’t believe her,” Godmother said, whispering into the phone. “She’s saying it over and over.”  Godmother assured the woman several times that she believed her, though her tone wasn’t entirely convincing to my ear. By this time, Godmother’s own train was boarding. She left the Amtrak officials with my daughter’s cell phone number, just in case, and ran to catch her train.

Hope withered. I began to assess next steps: call credit card company. A computerized voice prompted me to enter my account number, which of course I didn’t have. Just then, my daughter’s phone beeped, a New York number. I hung up with the credit card company. She called the number back while I studied her face. “Yes, yes,” she said. “Thank you, thank you.” She put the phone down. “Your wallet will be on the 6:15 train at the Baltimore station,” she said, then turned back to her computer as if it were no big deal.

Huh? A miracle and no details. I called back to ask the agent where I should go to pick up my wallet: the information desk. Her tone did not invite further questions, and I did not want to push my luck.

“Maybe it’s because you didn’t take those pearls last night,” my daughter said. I’d already forgotten about the treasure found in the field the night before, a pearl necklace on the sidewalk outside a restaurant. As pedestrians streamed past, I stood examining the clasp–no diamonds, but still, real pearls. We discussed what to do. Thirty years ago, I lost a pearl necklace at a party. It had belonged to a great aunt and had mostly sentimental value. Though it’s unlikely the pearls I’d found were ever going to be reunited with their owner, it didn’t feel right to take them. I left them in the moss at the foot of a withered Christmas arrangement in a planter outside the restaurant.

Carl Jung defined synchronicity as “meaningful coincidence”—we perceive events to be related in some significant way, though there’s no causal connection between them. The link is, perhaps, only psychological–in our heads.

When we got to Baltimore, it was snowing. Several inches had accumulated. The parking ticket was in my wallet so we used my daughter’s babysitting money to get the car out of the garage. I returned to the station an hour and a half later in worsening weather. In my heart, it was full-blown spring. My wallet, lost in the great underbelly of Penn Station, America’s Bombay, was due in any minute. What were the chances? The day had begun to take on mystical overtones.

No one was at the baggage claim area. At length, an agent appeared carrying a heavily taped box.  For me.  We opened it together. My wallet was there with everything but the cash. “Oh well,” I said, “it’s a miracle. I don’t even care about the money.” This wasn’t exactly true, as I’d been carrying quite a lot of cash.

“Did you check in your wallet for a voucher,” he said. “That’s what they do–take the cash, put in a voucher.”

“Just take it to the ticket window,” he said. “They’ll give you your money.”

The ticket agent was confused. She went to check with her supervisor. He confirmed that she should pay out the money. She didn’t have enough cash at her station. The manager came through again, digging around in his own wallet for the balance. “Just like your wife,” I said, as he handed it over.

Holding my wallet close, I walked from the train station into the snowy night. It felt like Christmas in February, and I fell under the spell of “field thinking”—the snow, the pearls, the wallet, all inscrutably related, as in an I Ching hexagram, prompting further reflection about fortune, good and bad, and the great mystery of how things flow in the universe.

It’s said that the Chinese, who evolved that ancient oracular tool, think in “fields,” or clusters of experience, essentially posing the question, “What likes to happen together?”

The summer after I graduated from college, I worked at a camp in Spain. I traveled home with my entire summer’s pay–$500 in cash—tucked deep in my suitcase, having decided that this would be a safer bet than carrying it on my person. The luggage never showed up at baggage claim. I lost my entire nest egg, the money that was to launch my post-college life.  Five months later I got a notice in the mail from the airline: We have property we believe is yours. I called the number they’d provided. The agent asked for a description of some of the things in the bag. I couldn’t remember that well—it had been so long since I’d seen my stuff. In my excitement, I directed him to the secret hiding place which would prove beyond any doubt that it was my property. Dumb, I know. The bag showed up a few days later, minus the $500.

The karmic score for both of my ancient losses—pearls and $500 cash—had been settled, mysteriously, in the space of 24 hours. Who knows what happened. Godmother thinks the wallet was found when they searched the cleaning lady’s locker. I can only say this: the pearls and wallet showed up in the same field. There’s a $500 reward for anyone who can tell me why.