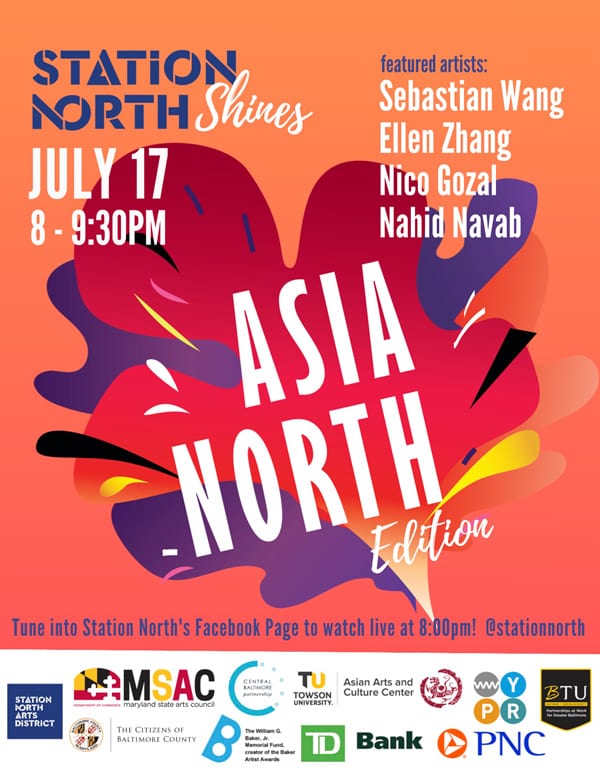 Asian Arts & Culture Center (AA&CC), Central Baltimore Partnership, and the Station North Arts District are thrilled to present part two of the Asia North 2020 Festival on July 17th at 8pm. Catch a virtual taste of Asia North 2020 in this third Station North Shines episode, featuring four artists from Asia North and two more recipes from local restaurants. Mark your calendars for July 17 and tune into Station North on Facebook to watch the Facebook Live event (hit “play” on the top post to see the livestream).

The Asian Arts & Culture Center and the Central Baltimore Partnership in collaboration with Stillpointe Theatre, Charm City Night Market, Motor House, North Avenue Market, and several other community organizations originally planned the Asia North 2020 exhibition for April 4-May 9 and a festival with performances and an Underground Night Market in Graffiti Alley by Charm City Night Market for April 4. However, due to COVID-19, the organizations have partnered with the Station North Arts District to go digital for the time-being, hosting the exhibit and live virtual events like this one online. Plans are being made to reschedule the live festival for fall 2020.

The evening starts with Paul Kim, who will share a story about how his grandfather became the subject of one of the largest portrait murals in the states, painted along North Avenue in 2014 by German artist ECB as part of Open Walls Baltimore.

The event will also feature two visual artists, Iranian-American painter Nahid Navab and Indonesian master silk painter Nico Gozal, both artists who take inspiration from their ancestral heritage and merge it with contemporary culture and design. They will be sharing their beautifully intricate work with us for a live artist talk followed by a Q & A. Don’t miss an opportunity to hear these two artists discuss their long-studied process, and ways in which their international travel and training have shaped their work.

Along with these two incredible visual artists, two musicians will also be performing. Sebastian Wang, director of the Korean traditional percussion performance troupe, Washington Samulnori, will be playing a sample of instruments like the changgo (hourglass-shaped drum), the buk (barrel drum), the jing (large gong), and the kkwaenggwari (small gong). Ellen Zhang, an award-winning musician, will be playing the guzheng, a traditional Chinese string instrument. The performances will be followed by a Q&A.

We will also hear from the co-curators and producers Nerissa Paglinauan, Joanna Pecore, and Jack Danna about what it took to put this hugely collaborative festival together, including an exhibit featuring twenty-five regional Asian and Asian American artists that you can visit online at https://www.towson.edu/asianorth. In between artists, Brown Rice and The Crown will share up asian-infused food and drink recipes to make at home!

This event will be streaming live on Station North’s Facebook Page Friday, July 17th at 8:00pm. You can RSVP via  Eventbrite or Facebook Event.

Nahid Navab:
INSTAGRAM
Nahid is an Iranian-American artist based in the Washington, DC area. Born and raised in Iran, she moved to the United States in her early thirties. A seasoned world traveler and profoundly influenced by Persian history and literature, Navab skillfully blends cultures from across the globe to create artwork infused with a synthesis of heritage and contemporary urban life. She will be showcasing a selection of her art along with a discussion about her work, followed by a Q&A.

Nico Gozal:
Nico Gozal’s cross-cultural art training includes the Budihardjo School of Fashion in Jakarta, Indonesia as well as the International Academy of Merchandising and Design in Tampa, Florida. Gozal draws his inspiration from elements of Central Java and Balinese traditional art and culture, including Javanese Wayang/shadow puppets, Javanese Batik motifs, and Balinese wood carving design. He hopes to bring a modern twist to Javanese and Balinese culture and introduce them to the rest of the world. He will be presenting images of his work, followed by a Q&A.

Ellen Zhang:
Ellen has been playing guzheng for 8 years with her teacher, Xia Bing. She has performed at multiple locations such as Carnegie Hall, the Arthur M. Sackler Gallery, local senior centers, and many more. She looks forward to performing and introducing Chinese culture to those that may not be familiar with the guzheng.

The Asian Arts & Culture Center at Towson University engages the university and surrounding communities in cross-cultural dialogue through a broad range of artistic and cultural learning experiences related to Asia. Programs increase understanding of the world’s diverse cultures, challenge stereotypes, strengthen cultural competency, and offer unique perspectives on creativity and the human experience.