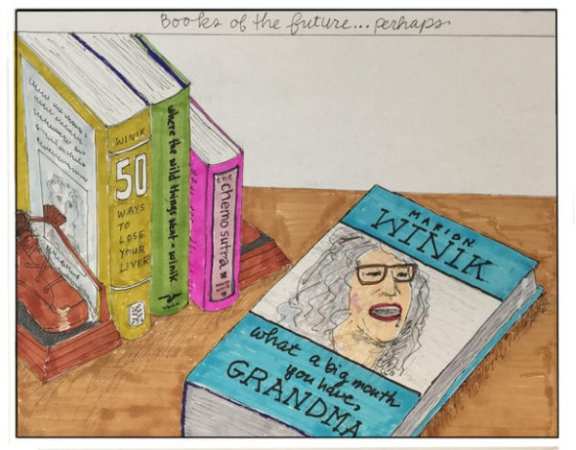 In February 2019, about six months into my empty nest lifestyle, I realized how many more hours there are in a day when you live alone. I thought I might need a hobby. Since I already speak a little Spanish and have been wanting to improve, I signed up for online lessons at Berlitz.com.

After a month and a half of working hard at it, I began to doubt I would retain all that vocabulary and grammar with no conversational practice. But before I could get myself to a Meetup.com happy hour, I lost interest in the solitary online learning process. Next time I try to learn Spanish it will be in Guanajuato or Marbella.

A busy period began, and by the time it ended it was early summer. I read a really cool graphic memoir by Mira Jacob called “Good Talk,” about raising a biracial son in the time of Trump. I thought about how I often like illustrated memoirs more than regular memoirs – Roz Chast, Alison Bechdel, Marjane Satrapi, and Lynda Barry all came to mind. Should I try to do an illustrated memoir? Not a full-on comic-strip-style one, but perhaps more like an illuminated manuscript?

Now we go back to 1980, because that was the last time I tried to do something artistic with any seriousness. I was a couple of years out of college and thinking of going back to school… but for what? On an impulse, to try it out, I signed up for an undergraduate advertising class at the University of Texas with a New York art director named Len Rubin.

I had some ability going in, and during this semester I made a lot of progress. I remember staying up all night working on my campaigns with my huge set of Design markers and pads of tracing paper, carefully hand-lettering the fonts as Rubin required. Here’s a picture of some of the boards I still have left from that time. 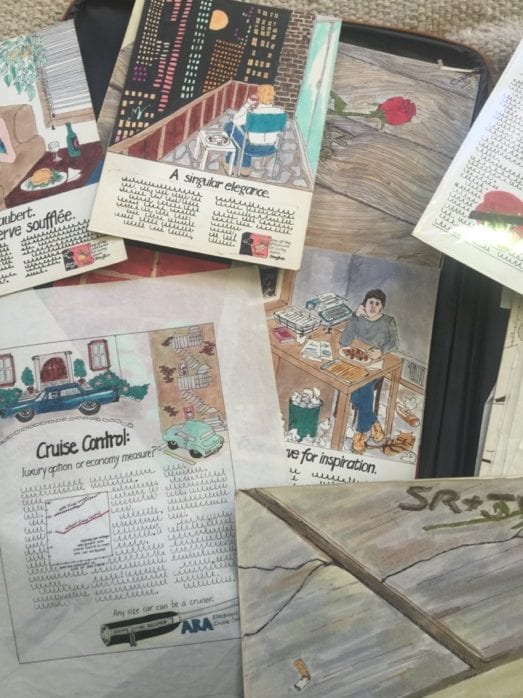 As much as I was enjoying this work, around the time Reagan was elected, I abruptly came to my senses and realized that selling my soul to the capitalist machine was not for me. I filled out applications for creative writing MFA programs, and stopped drawing for almost 40 years.

Wow, I thought last summer when I looked at the advertising boards, somehow I did this! I decided to apply what I remembered of the techniques to illustrating “Cats and Dogs of Evergreen” — at that point a collection of vignettes about people and their pets, but perhaps ultimately a memoir about my dog Beau and me. (Readers of this column have seen some of this work before: here and here.)

I ordered some markers and paper off the Internet and got to work. I liked the way the first few pictures came out, and was amazed by how good I felt when I was working on them. I was experiencing that excellent right-brain consciousness that you get when absorbed in drawing. I had forgotten how it feels exactly like happiness. (For a good explanation of how this works, get the book Drawing on the Right Side of the Brain, by Betty Edwards.)

I started taking my pictures around and showing them to friends. People loved them! Everything was going great.

Unsure of how to get from here to a full-fledged book manuscript (for one thing, the book was nowhere near written), I wondered about taking a class, and not an online one this time. Google led me quickly to the Baltimore Academy of Illustration, less than ten minutes from my house, near the Senator Theater. I wrote an email and received a quick response from a guy named Greg Houston, who said that while there was no graphic novel class offered this fall, I could take his independent study, where each student pursued their own project. We made an appointment for me to come in to discuss it.

Ol’ Greg was totally unimpressed by the images I showed him. These are tracings, he said. Anyone can do this. He seemed equally unmoved by my cute lettering. He said that to develop an illustration style, I would have to start by actually drawing. Lettering – well, that was a whole other thing. Still he would be happy to take me in his class.

Um, I said, and left, doubting I would ever return.

I spent the last weeks of August teaching memoir classes in Provincetown. I took Beau with me, and we had an excellent time. A sprightly though ancient-looking fellow at fifteen, Beau made friends easily at the Fine Arts Work Center. His biggest fan was the nine-year-old daughter of the writer Nick Flynn and his wife, the actress Lili Taylor.

Here he is on the ferry, and trotting over to visit his new celebrity family. 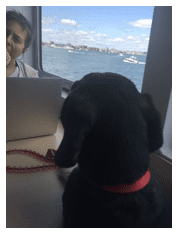 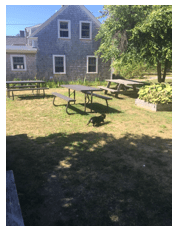 I spent a couple of mornings trying to write my way into the dog book, drew one lame picture, and decided the time was not right. I had just heard that my publisher felt the same, having responded to my query with a suggestion that I get back to him in a couple of years. Oh, well. I pushed the art supplies away with a sigh.

When I got home, there was a perky email from Greg saying registration for fall classes was open. I hesitated. But what did I have to lose? Five-hundred and fifty bucks was only $40 a class. Fair.

September 12 was my first day at BAI, an unassuming but pleasant place on the second floor of a 70’s office building. My fellow classmates were all professional illustrators working on their portfolios, except for one, who was working on her sister’s wedding invitation. I was both the oldest person and the least accomplished by a mile. Though I told Greg I’d begun to lose heart on the dog book, he suggested I draw three of my characters, two perspectives each, as a first assignment. I could look at photographs, but no tracing, he warned.

I sat down and wrote BEAU – SQUASH — ME across the top of the page, and proceeded to try to draw dachshunds, tabby cats, and myself using pictures on my phone as inspiration. They were not coming out well. I was not feeling the drawing high at all — just increasingly miserable and frustrated. An hour into the three-hour session, I gave up. Maybe I could still get my money back. I began to put my things away.

Should I talk to Greg? He was busy bantering about the evolution of the Marvel canon with another aficionado. On one side of me, the wedding invitation – required by the poor woman’s Bridezilla sister to contain both a male and a female lion and a snowflake — was taking shape. On my other, the damsel in distress of a graphic novel set in the FDR era was beginning to emerge. Across the way, a boy with cantaloupe-colored hair down to his waist and thick horn-rimmed glasses was working on a landscape so gorgeously and finely detailed, it could have been in the OCD wing of the Visionary Arts Museum. I looked down at my scribbles. I was a kindergartener among grad students. I got up and began to shuffle out.

I was halfway down the hall when Greg appeared beside me. Wait a minute, he said, and ushered me into an empty classroom. 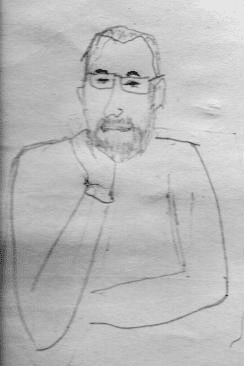 I was no big Greg fan at this point but that was about to change. Later I would laugh thinking how many times I had been on the other side of a first-day-of-class freak-out, but in the moment I was a quivering mass of unhappiness and stress, on the verge of tears.

This was a big mistake, I told him, my voice shaking. I could no more draw people and animals from my head than fly to the moon. He said he didn’t agree with me that I couldn’t draw, but since this was an independent study, he would be happy to start me off with a personalized basic curriculum. I’d already forfeited half my tuition, but had another week to still recover 50%, so I might as well give it a try. Before I could say no, he whipped together a still life composition of random objects and left me in the empty classroom. 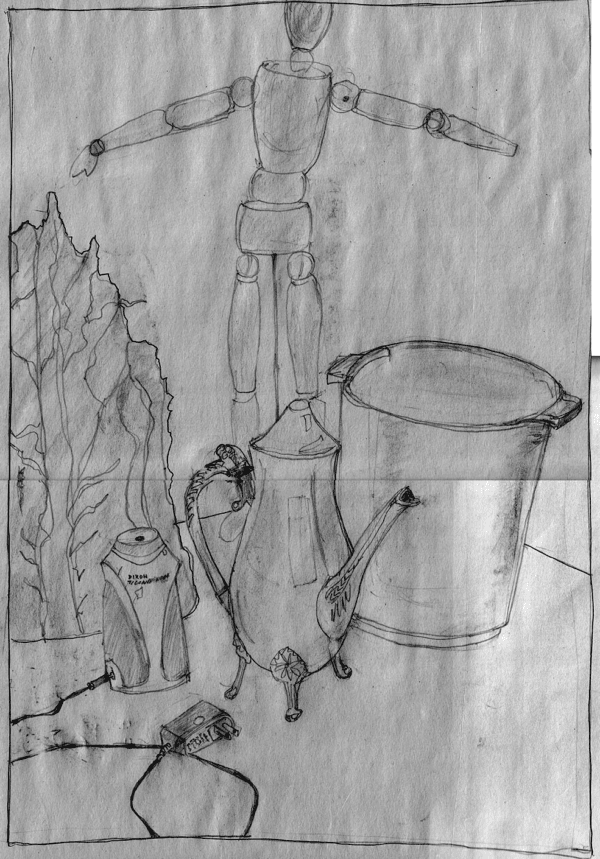 What do you know?!? I got into the magical head place and an hour disappeared. I went to show Greg my work. Are you happy with it? he asked me. Well, I said, sort of. Which part did I like best? He asked. I said the teapot. He had me draw that teapot two more times, using ink, then drag it home for homework. 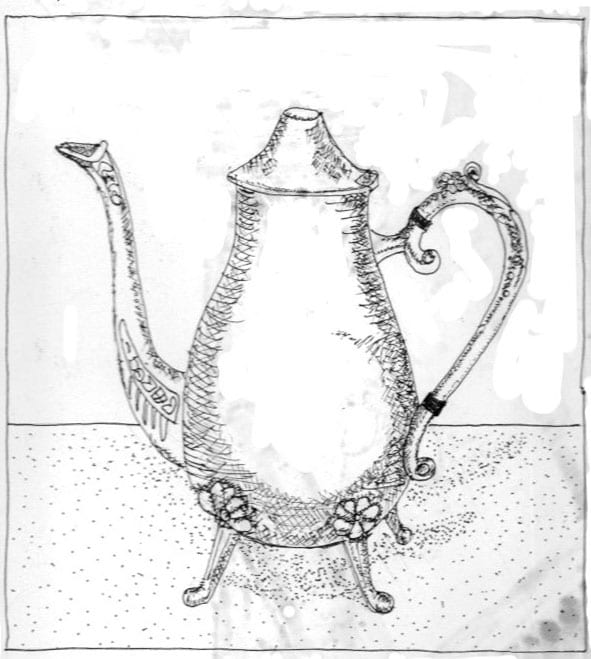 How do you do shading in ink? I asked the following week. Something with crosshatching or dots?

Just try things and see if they work, Greg told me. If you want to have your own style, it’s better to just figure it out.

Well, I did try, but fortunately my classmates helped me out with some tips. As the classes went on, I got more and more into asking for help from Kaleb, Avis, McKinzie, Adam and Dave.

After the teapot, I started drawing people from photographs. Since illustrating my essays was clearly going to require drawing myself, I started by copying the photo on the cover of First Comes Love, taken during a day-long photo session with the famous photographer Marion Ettlinger in her NYC loft in 1996. 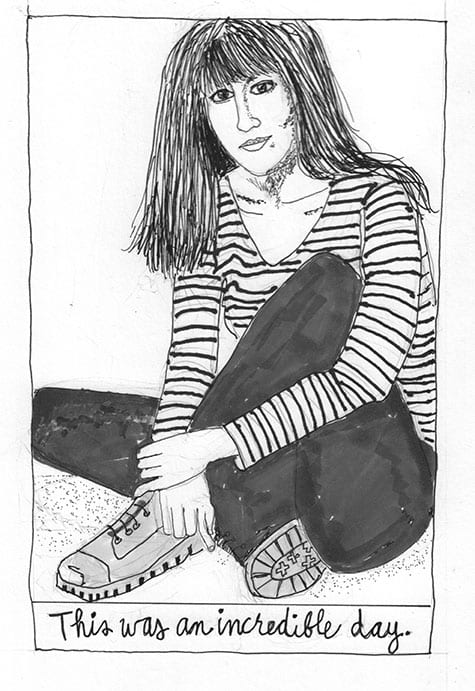 Soon, I felt like I was ready to try illustrating my work. I had just published October’s column, Angels in Baltimore, and decided to draw Dr. Bob. After that, I drew the car mechanic, Rich. It was Greg’s idea to give him wings. I loved this, because it showed how illustration can add things to the work that are different than what you’re doing in the text. So… it wasn’t only that I had to learn to draw, I had to learn to think like an illustrator. 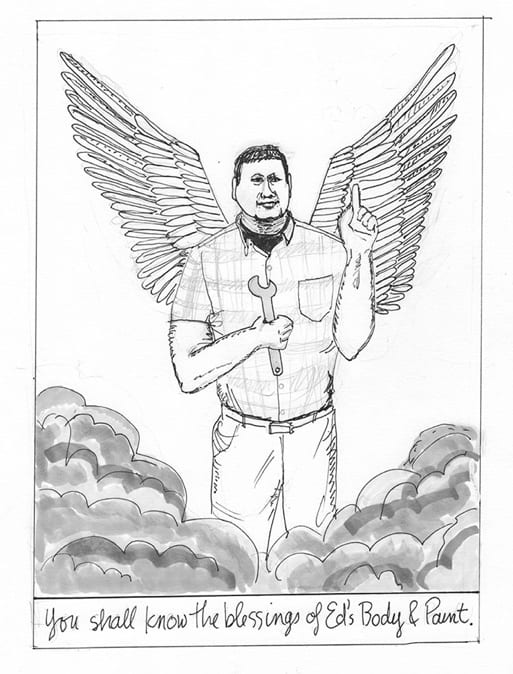 It was my classmates who answered my question about why Rich’s right arm – the one holding the wrench — looks weird. If he straightened it out it would be longer than the left one by quite a bit. Elbows end at the ribs, they told me. Having studied art, they are full of these little tidbits. I’m going to miss them when the class ends— such talented, sweet people. You wouldn’t call Greg sweet exactly, but he’s a good teacher.

Last Tuesday at 5:30 pm, as I was walking into yoga, I had the thought, “This has been a perfect day.” I tried to think why it felt so perfect. In addition to the usual reading and working on articles, I had spent a lot of it on a homework assignment for drawing class and writing a limerick for a friend’s birthday. At the same time, nothing even a little bad had happened all day – no upsetting email, wrongly-addressed text or unexpected envelope in the mailbox to start my heart racing. Between that and the hours of drawing, I was high on life.

Clearly the disaster of the empty nest was a mirage. This is working out fine. An illustrated book is still a long way off, but I have time. 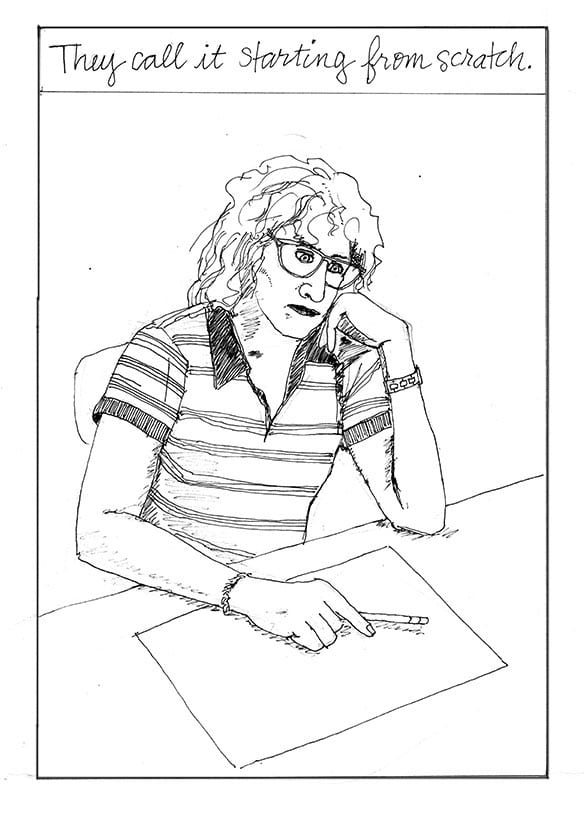