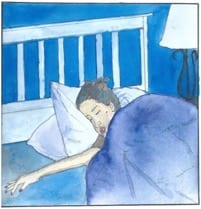 I used to think the most unbearable feeling in the world was being misunderstood. Now I am misunderstood so often that it must be I who misunderstands. Most problematically, I seem to misunderstand myself.  The big thing that’s happening now, where white people who didn’t think they were racist are finding out they actually are? That is happening to me, and not just on the social justice front. In the end, it may turn out I was a very deluded Shetland pony or a Catholic nun in the grip of a fever dream.

A working definition of aging: the process of gradually determining that everything you ever thought was wrong.

For example, until I was well into my twenties I thought I would never marry. I could only picture myself as a single person. Even after I was wrong the first time – married in ’86, widowed in ‘94 — I still knew I would never marry again. I married for the second time in the summer of ‘99. I wrote it up for the Oprah magazine, probably for at least a buck a word. You can still read it online. I don’t even know who the person who wrote this article is.

A corollary: not knowing who I am anymore is making it really, really hard to write personal essays. And since I thought I was a person who writes personal essays… double indemnity, creative nonfiction style. Eventually, I’ll be able to explain what the hell happened to me this spring. Right now, I’m lost.

One of my big concerns at the time of my second marriage was the possibly perilous overloading of celebration in the month of June. Our wedding was June 19th, 1999, the day before my husband’s birthday, and Father’s Day was right around then. I thought that was challenge enough, then our daughter Jane ended up being born on the 21st the following year. Summer solstice of the millennium, in fact.  Every year I would ambitiously plan four distinct celebrations and amass all the relevant presents, wildly stressed out in the most first-world way possible, never doubting that I would be doing this every June for the rest of my life.

Almost all the people who once loved me most – mother, father, husband #1, husband #2, best friend, mother-in-law – are dead or have moved on. I am at last the very single person I pictured. (If my children and dear remaining friends feel their contribution is being ignored — No! It isn’t! Don’t leave me!) From the depths of my disoriented gloom, I have been planning a line of greeting cards.

You get the idea. As for a birthday card for my daughter, this is it right here. Since it is the only June celebration I still observe, I have devoted the entire month to it, and as in the May column, offer three paintings and a poem, this time following an even more obscure form.

This poem is a Portuguese glosa, or gloss. It usually opens with four lines from another poet, followed by four ten-line stanzas, each of which ends with one of those lines, and in some way comments on them. Within the stanzas, lines 6 and 9 rhyme with the 10th. As with last month’s sestina, I produced one of these a long time ago. “Metasex,” page 68-69. I still like it as much as anything else I’ve written. It’s here.

And now for a gloss on Michael Ondaatje’s poem, “To A Sad Daughter.” The first four lines are his.

For A Twentieth Birthday, in Quarantine

Want everything. If you break
break going out not in.
How you live your life I don’t care
But I’ll sell my arms for you.

Yesterday I learned I have been washing myself wrong
all my life. You don’t put soap in there, Mom. Don’t you know
what that does to the pH of your vagina? My ancient puss
blushed at the attention. All the things you know about
eyebrows, oat milk, ­­white privilege, and I can barely
brush my teeth or read an expiration date. I take
the blame for those pillowcases that made your hair frizz.
Mine was a butch mom; my trousseau, martini olives
and a pile of golf hats. I can still teach you all my best mistakes.
Want everything. If you break

the butter dish or the dachshund statue, get out the crazy
glue, start writing. Potential embarrassment is no reason
to leave a door unopened. Don’t be shy, don’t be afraid
to raise your hand. Give the answer, place your order,
tell the waitress, tell the teacher, tell that icky man
to go away. Do you need me to say this? You always win
at cards, beat me at Scrabble. You know, and you know
you know, and what you don’t know, who knows. They say
it can’t hurt you. But the line between brave and stupid is thin.
Break going out not in.

No college kid in America wanted to come home
when quarantine started, and some didn’t.
You did, miserably, weeping for your sophomore year,
but since then you’ve showed everyone how it’s done.
Nine-minute miles, Wheel and Dancer, granola and yogurt,
protests, TikToks, All Cops Are Bastards. Your hair
stops strangers in the street, exclaiming as if they spied
an adorable pet. I was sad, at first, about the hand-
inked tattoo, but here is something we share:
How you live your life I don’t care

What I mean is, I trust you.
I have been making portraits of your self-portraits;
when someone asked if you don’t mind, you had to
laugh. Since the late nineteen-eighties I’ve only
made pictures of children. You popped in twenty
years ago to give your brothers a break. It’s true,
for me, parenting has been one big scam.
Before we open your presents, I’d like to ask Michael
Ondaatje if this is really such a great thing to do.
But I’ll sell my arms for you. 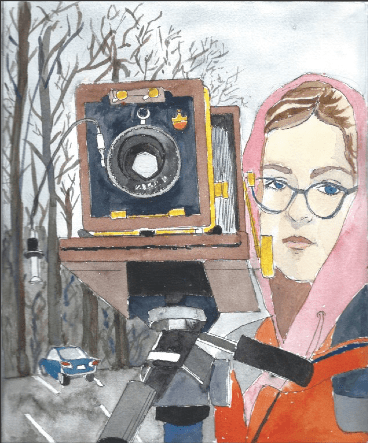