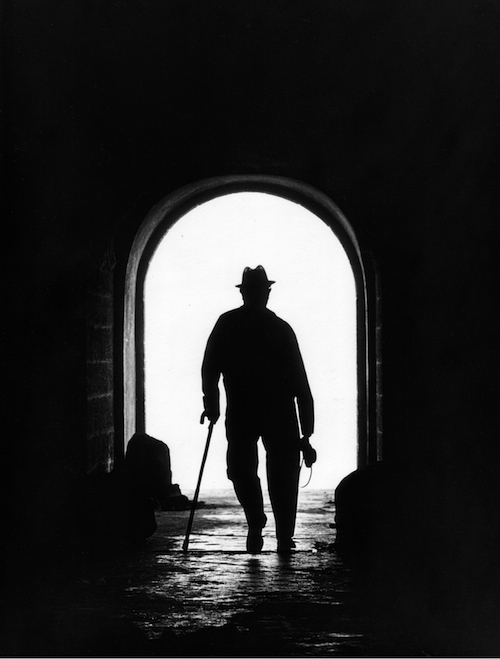 University of Baltimore student Matt Harris is almost totally blind and partially deaf, and yet he attends his college classes, earns good grades, parents two young women, and finds a reason (almost) never to complain. Is he superhuman, insane or somehow wiser than most? Read on.

“What’s up Mattiac,” my neighbor answered, calling me by the nickname she had given me.

“Well. I have good news and bad news,” I said into my cell. “First, the bad. I ran over your son’s shoes with my lawnmower. The good news is his feet weren’t in them.”

END_OF_DOCUMENT_TOKEN_TO_BE_REPLACED

A shy girl of eight, she and her mother had just moved to the Pikesville community from their home in the Midwest, leaving her friends – and her father – behind.

END_OF_DOCUMENT_TOKEN_TO_BE_REPLACED I met Mary Patelli when I was five. Our mothers were ICU nurses together, both divorced, both in co-dependency meetings. Our families lived around the corner from each other in the suburbs of Baltimore. I saw her nearly every day; we vacationed together in the summer. We shared mothers.

END_OF_DOCUMENT_TOKEN_TO_BE_REPLACED

Over the Threshold: The Mystery of My Dad’s Missing Love

Baltimore writer Holly Morse-Ellington believes her newly divorced father has a super serious girlfriend–unfortunately, thanks to her dad’s close-lipped nature, her best information source is a tiny barking dog.

My parents’ divorce has been a long road for me. Maybe it’s not my road to travel. But that’s the thing about family. No matter how carsick their problems make you, you’re stuck in the backseat. Hands tugging at the child safety locks activated on the doors. Head hanging out the window and panting, “Are we there yet?”

END_OF_DOCUMENT_TOKEN_TO_BE_REPLACED

There is no music I can listen to

That does not have an overtone of you.

No Crosby, Stills, and Nash. No Billy Joel.

The presets on the stations: maybe Jazz

Will be my new life’s soundtrack, post-divorce?

END_OF_DOCUMENT_TOKEN_TO_BE_REPLACED Money problems cause stress and stress causes relationships to dissolve — sounds logical, right? But that’s not how things played out in recent years, according to recent research from University of Maryland sociologist Phillip Cohen. In fact, between 2009 and 2011 (aka, those recessionary years), there were actually 150,000 fewer divorces than would otherwise have been expected.

END_OF_DOCUMENT_TOKEN_TO_BE_REPLACED

Now that over fifty percent of U.S. marriages end in divorce, there are more single people in their thirties, forties and fifties than ever before. What does this mean? Where will it lead? Is this a problem to be solved, or a phase in the development of a new social order? I have no answer to these questions but I do know this — there are only two single men in Baltimore and they both have girlfriends.

Let me explain. In 2009, when I arrived in town newly separated, helpful friends pointed out two fellows I’ll call Monty and Elliot. Monty was a dashing silver-haired photographer known for his elegant cocktail parties, Elliot a clever bartender in horn-rimmed glasses who was also a sportswriter. I cast my gaze in both directions but didn’t end up dating either one of them.

Five years went by. Many more marriages ended. Numbered among the most recent crop of emerging singles is my fetching friend Strawberry Shortcake, a wide-eyed Girl Scout type fifteen years younger than I, hence not as scarred by the dissolution and depravity of the 1970s and 80s. This past Saturday I had the honor of taking Strawberry on her first night on the town as a single woman.

I am sad to report that it started with Monty and ended with Elliot and both Strawberry and I were home in bed by 11.

Plans for the evening were conceived when I received an invitation to one of Monty’s famous soirees, an event I assumed would be teeming with romantic possibility. When I asked Strawberry to come along, she readily accepted. In fact, another friend had already suggested she go. Five and half years later, Monty remains one of Baltimore’s leading men-about-town.

I suited myself up in black leather pants and boots; Strawberry appeared in one of her usual Little House on the Prairie ensembles, many of which feature gingham and shawls, yet have a weirdly sexy effect.  The party was congenial enough, but Monty had a girlfriend in the kitchen. There was at least one other eligible man there, though even from a distance he appeared gloomy and tormented; it turned out he was the “Hot Neighbor” of Lauraville whose very recent marital breakup had already gone out over the wires. I realized this early in our conversation and exclaimed, “Oh, I know who you are! You’re the Hot Neighbor!”

He looked confused. When I explained, he brightened for a moment before sinking back into his bitter malaise. “Well, maybe I will be soon,” he said.

With the possibilities chez Monty so quickly disposed of, I suggested to Strawberry that we hit the bars and see what might be available. Having recently attempted a similar reconnaissance mission with another cute young divorcee, Rainbow Bright, I decided to skip Hampden and Station North.

Just a few weeks prior, Rainbow Bright and I had hoofed it through 13.5 Wine Bar, the Hon, Fraser’s, Holy Frijoles, Joe Squared, Metro Gallery, The Depot, Club Charles, and several no-name spots on Howard Street. We turned up dozens of hipsters barely over their acne, two drag queens named Ellen Degenerate and Miss Construed, a bunch of my students from the University of Baltimore, and, briefly, John Waters, but even the open-minded and dauntless Rainbow Bright could find nothing of concupiscent consequence. At 1:20 a.m. we finished the last of our vodka-sodas and called it a night.

END_OF_DOCUMENT_TOKEN_TO_BE_REPLACED UB grad student Ellen Hartley watches her wild life race past from behind the wheel.

When I was 15, my mother drove me to the doctor’s to have a growth removed from my neck. I was old enough to get my learner’s permit but hadn’t gotten around to it yet. So I had to be chauffeured. Mother was more than happy to comply — she was in no hurry for me to start driving. Especially since it was her car – a shiny new Chrysler Windsor Deluxe – that I’d be abusing.

END_OF_DOCUMENT_TOKEN_TO_BE_REPLACED

Thanksgiving 2011, my parents, my brother, my son and I flew 800 miles from Baltimore, Maryland, to Cape Canaveral, Florida, to see Curiosity take off. There are infinite variations of where we travel and why, and of how we get where we’re going. The explanation for this journey was that my father, a scientist, had VIP passes to the launch and thought it was an opportunity we shouldn’t miss. My recent separation was another reason, though not one we would offer those who asked about the trip.