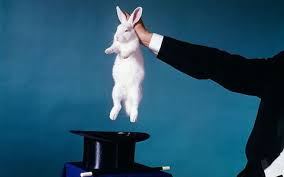 Please be advised: This is the last rabbit I’ll be pulling from the hat. Little Magic has been canceled. Now you see it; now you don’t.

In the poem One Art, Elizabeth Bishop writes: The art of losing isn’t hard to master. I had a meeting with my editor. After the niceties, she told me.

It didn’t feel great, of course, although even I could see that my essays weren’t always the best fit (yoni steaming, Queen of Death ritual, wand crafting). And part of me was even relieved–no deadline. Free! But mostly there was sadness, the feeling of, Shit, what now, I might never write anything without a deadline.

I went from this meeting to a yoga class. Arriving early, feeling rather small, I found myself in the ladies’ room with my yoga teacher and a buddy I’ve practiced alongside for years. Briefly, I thought of maintaining the front that everything was just as usual while processing a lot of uncomfortable feeling. Then I remembered something I’d read in the book Daring Greatly by Brene Brown, something about showing up wholeheartedly, that is, with our vulnerability and less than optimal feelings. I told them about the column. I said, “I mean, it’s not such a big deal, but–“

My teacher said, “Yeah, but you’ve definitely got to get all funky for a day or two.”

I got all funky for a day. I went off in a corner to lick my wounds. By the next day, I was dragging out the oil pastels, making a mess, teasing the writer out through play. Perhaps Bishop, too, found creativity paved the way to acceptance: So many things seem filled with the intent/to be lost that their loss is no disaster.

My friend Marion Winik, Baltimore Fishbowl’s most beloved columnist, was an early champion. I’d told her I envied the conversation she had going with her readers, her comfort level with self-exposure, which always seemed so scary and risky. In an email, to me, she said, “Pitch your own column.” Then she anointed it with its early vision, “I’m sure you can appreciate what a cool mix of the every day, the inner, and the extra-sensory it could be.”

June 2016, the launching. A mad scramble at the last minute: what to call this thing? I had a long short list; I was at the beach Googling nautical and fishing terms. Perhaps it was hard to name because I didn’t really know yet what I was up to—Soundings, that might have been a good one, From the Deep, Something Fishy. Haha. Also, I was exceedingly uncomfortable with self-exposure; the line between skin in the game and icky is a razor’s edge.

I’d just read, and loved, Elizabeth Gilbert’s manifesto on creativity, Big Magic. I thought, why not Little Magic? In the last-minute scramble, some well-meaning soul, understanding that an introduction was required, wrote: “Welcome to the first installment of Little Magic, a new monthly column that explores the mysterious forces in our everyday lives.” I cringed when I saw this. Actually, I still do. The first column, Mirror Mirror, featured the silvered witch ball that hangs in my kitchen window: “Any witch trying to enter the house through a window would catch sight of her hideous reflection and be frightened away.” While I don’t know anything about mysterious forces, I do know a little bit about the unconscious, the shadow, and about projection, seeing out there what’s in here. I was just beginning to stake out my territory, in a pin the tail on the donkey sort of way.

Next, I wrote about the family beach house, making beds, and got in all sorts of trouble with my sisters-in-law. There were issues of tone. At the time, I didn’t really know what a lyric essay was, but I invoked the term in my own defense, maybe thinking it qualified as lyric because I’d included a mockingbird in the pine tree outside the beach house which sang “a medley of tunes with all its heart.” A clear case of seeing out there what’s in here. On another day, I might have written something sweeter, but that day I was thinking about tradition as a stifling force, and what came out was more of a diatribe. I lost some ground with my husband’s tribe over that one.

Practice losing farther, losing faster. I wrote about the woman who lost her life walking her dog and the loss of innocence in childhood, and, indirectly, about the loss of a brother. I wrote about a retreat with Elizabeth Gilbert and her partner, now dead of liver cancer. Under Gilbert’s guidance, using snippets from the notes I’d scribed over the weekend, I came up with a little mantra, more of a magic spell, along the lines of abracadabra: “Follow the animals… lickety-split you’ll have a book.” Not too long after that, I lost the notion that any book was going to spill forth from me lickety-split.

A year and a half into the making of Little Magic, I signed up for an online course called Urban Priestess Mystery School. I wrote about the foundling, a kitten, who was to accompany me on that journey. Now, a year later, that cat is already down two lives. I never wrote about the night my husband took him out for a walk with the dog and accidentally clonked him square in the face with a golf club, knocking him out cold, or about the frantic trip to the pet ER, or about wailing, in the car, to the universe at large, “I hate fucking golf!”

I wrote something like 27 essays, often following the animals: horses, dogs, cats, Barred owls, weasels, mice, moles. There were animals I wanted to follow and never got to. I hope they’ll come back to guide me, as in a fairy tale, to wherever it is I’m going.

Thanks to Baltimore Fishbowl for giving my idea for a column a chance, for giving me a forum to practice the art of losing. Though it may look like (Write it!) like disaster, it’s not–no fledgling wants to be nudged from the nest, but how else will she learn to fly? If you’re one of the people who has read this column consistently, or even occasionally, I especially want to thank you.