The first thing that happened when I walked into Blair’s on Hudson was that I ran into some friends I hadn’t seen in a few years. It was a Thursday night and Blair’s was packed. Judging by the level of chatter and laughter in the air, we weren’t the only guests who had discovered an old friend at the bar or at the next table.

That’s no surprise, either: Blair’s checks all the boxes necessary to make a good neighborhood restaurant. The service is terrific, the menu is a globally influenced mix of casual staples (including a great burger) and more elegant fare and the drinks come quickly. Plus, the restaurant has an upbeat vibe that sends the message–intangible as it is–that dinner there will always be a good time.

Blair’s opened at the beginning of the year, in the corner space in Canton that used to house Mad Dog Murphy’s. Chef/owner Ted Stelzenmuller was formerly the proprietor of Jack’s Bistro, a beloved restaurant located on a different Canton corner that closed prior to Blair’s opening. (The Jack’s space is now a bar, The Regal Beagle, co-owned by Stelzenmuller.)

Jack’s fans will like Blair’s. The menu includes some of the old restaurant’s most famous dishes, like the mac and cheese with chocolate, and the crew is just as welcoming.

Our dinner started strong with a round of killer drinks, including an excellent Manhattan and an interesting, well-balanced cocktail combining vodka, mezcal, lime juice and thyme simple syrup. Both were sophisticated and highly drinkable. 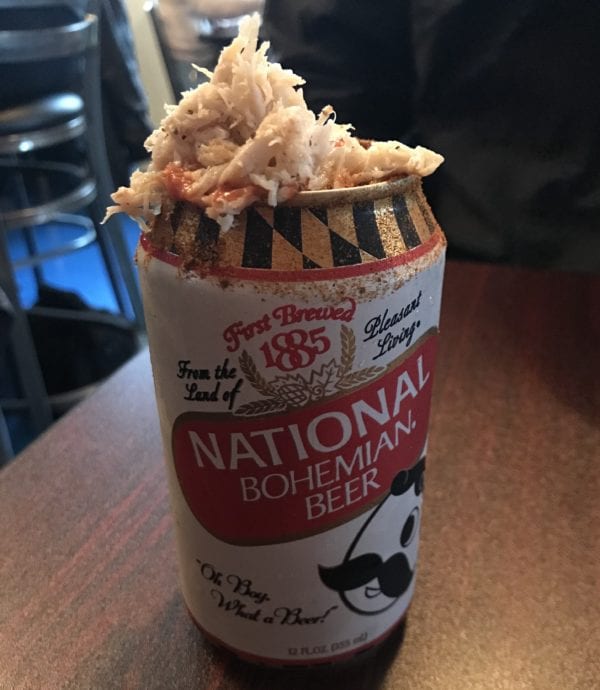 Perhaps somewhat less sophisticated, but still a great order, was a Natty Boh with “the works”–the works being an Old Bay rim, hot sauce, citrus and a hunk of crab meat right on top of the can. It sounds like something designed for Instagram, not for actual drinking, like those Bloody Marys topped with a cheeseburger and a steamed crab. But in practice, the lime and hot sauce elevated the beer, adding bite and tang, and we loved it.

Our appetizers were equally appealing. Samboon-style chicken wings, tossed with a soy-based sauce and served with sliced jalapeño and herbs, were packed with flavor and just enough heat. 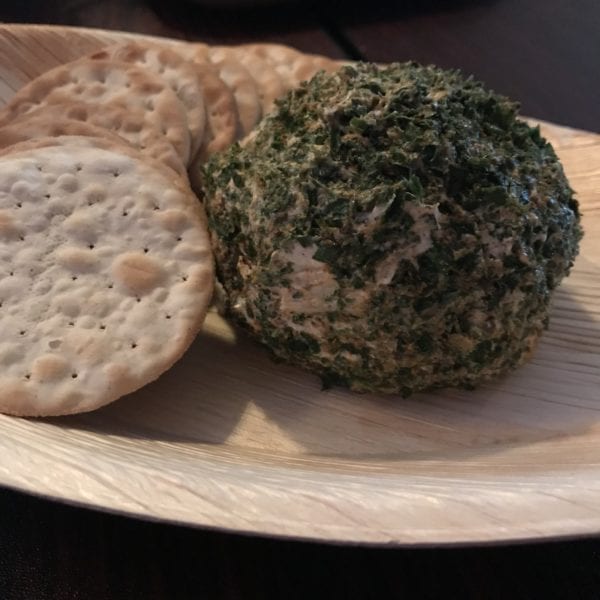 A crab-and-cheese ball, rolled in herbs and served with Carr’s water table crackers, was retro in the best way. It would be perfectly at home at a dinner party in 1955, but it was equally charming–and tasty–in 2018.

Beyond the flavor, the cheese ball pleased us in one very specific way: We had exactly the right number of crackers for the cheese. That detail seems small, but Blair’s wouldn’t get it right if the kitchen wasn’t paying close attention to what it creates. Correct cracker-to-dip ratio is something that’s off at even very good restaurants much of the time.

The evening’s burger special, a Greek-influenced creation covered in melted haloumi, was a juicy and delightful. The burger was the winner at our table.

Guinness-braised filet with savory demi-glace, green beans, and smoked gouda, jalapeño and bacon grits reminded us of the value of seasonal cooking. Unfortunately, that reminder was the result of the dish not being in tune with the season.

Overall, the dish was a good one, well-seasoned, with flavors that complemented one another. The meat, prepared sous vide, was exceedingly tender. The kitchen did its job well, but we should’ve saved the order for a chillier night. Steaks can be great summertime food, but this one, with its sauce and sides, was too rich for warm weather.

Another old Jack’s favorite, the Kitchen Noodles, turned out to be our biggest disappointment. We liked the flavor of the dish, which included shrimp, plus udon noodles tossed with bacon, mushrooms, onions, jalapeños and a soy-based sauce, but we wanted the whole thing to be saucier.

Because the sauce just coated the noodles and their accompaniments, the dish was sticky, edging toward dry. The combination of savory ingredients had the potential to be a terrific umami bomb, but it needed more of that sauce for the flavors to gel and the texture to work. 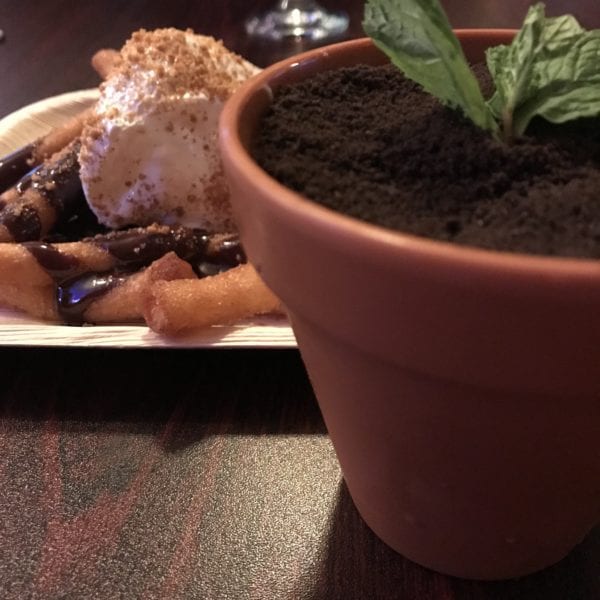 The meal ended on a whimsical note, with s’mores-style funnel cake fries and a lemon cheesecake that arrived packed into a plant pot, tamped down under a crumble of chocolate “dirt” and a sprig of mint. The presentation was fun and the desserts were everything we wanted them to be.

Throughout dinner, our waiter kept a close eye on our table; our water stayed filled, we were never without drinks and our food was delivered in a timely, but not rushed, fashion. Plus, he found the golden mean when it came to enthusiasm and friendliness. We had a good time with him–as is appropriate for a corner restaurant in Canton–but never felt like he was overly cheery or putting on a show.

After dinner, we stopped by The Regal Beagle, the bar that now occupies the old Jack’s Bistro space. The night was warm and rainy, so despite its open windows, the inside of the bar was only slightly less steamy than a sauna, which made our beachy drinks (our favorite was the tart daiquiri) seem appropriate.

You don’t have to end a visit to Blair’s on Hudson with a side trip to The Regal Beagle. But chances are, when you leave the restaurant, you’ll be in good spirits. So extending the evening with another drink in the neighborhood wouldn’t hurt.

Bottom Line: Blair’s on Hudson, which opened earlier this year in a corner building in Canton, might be the ideal neighborhood restaurant. Chef/owner Ted Stelzenmuller’s globally inspired menu includes both casual and elaborate dishes and drinks that are both sophisticated and approachable. Add in the super-welcoming wait staff and you have a place that could easily become a regular haunt.