Hot Plate will be on hiatus next Friday, the day after Thanksgiving. This column includes events happening through Friday, Dec. 3.

From turkey to holiday cheer, the next couple weeks bring a key transition here in Baltimore (and around the world). Local restaurants are ready for both the Thanksgiving holiday and the festive season that kicks off on Friday. Here’s a look at what’s coming up:

END_OF_DOCUMENT_TOKEN_TO_BE_REPLACED 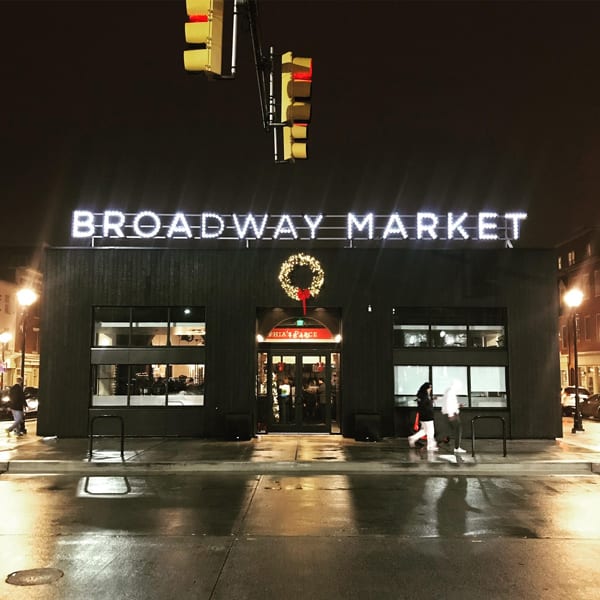 People are staying closer to home these days, but there’s still lots to do in the region. 9 ½ Hours is a feature with suggestions for local day trips.

Broadway is a spine running north-south on the East Side of Baltimore, connecting the harbor piers of Fells Point to the dome of the original Johns Hopkins Hospital.

At each end are two distinctive city public markets, dishing out food, drink and groceries for residents, workers and visitors, much as they have since the 18th and 19th centuries.

Broadway Market to the south and Northeast Market at the north are bustling, inviting and authentic – packed with local food stalls and devoid of chain stores or marketing.

Baltimore Fishbowl recently spent 9 1/2 hours exploring three of the markets on the west side. This installment focuses on Broadway Market and Northeast Market.

END_OF_DOCUMENT_TOKEN_TO_BE_REPLACED 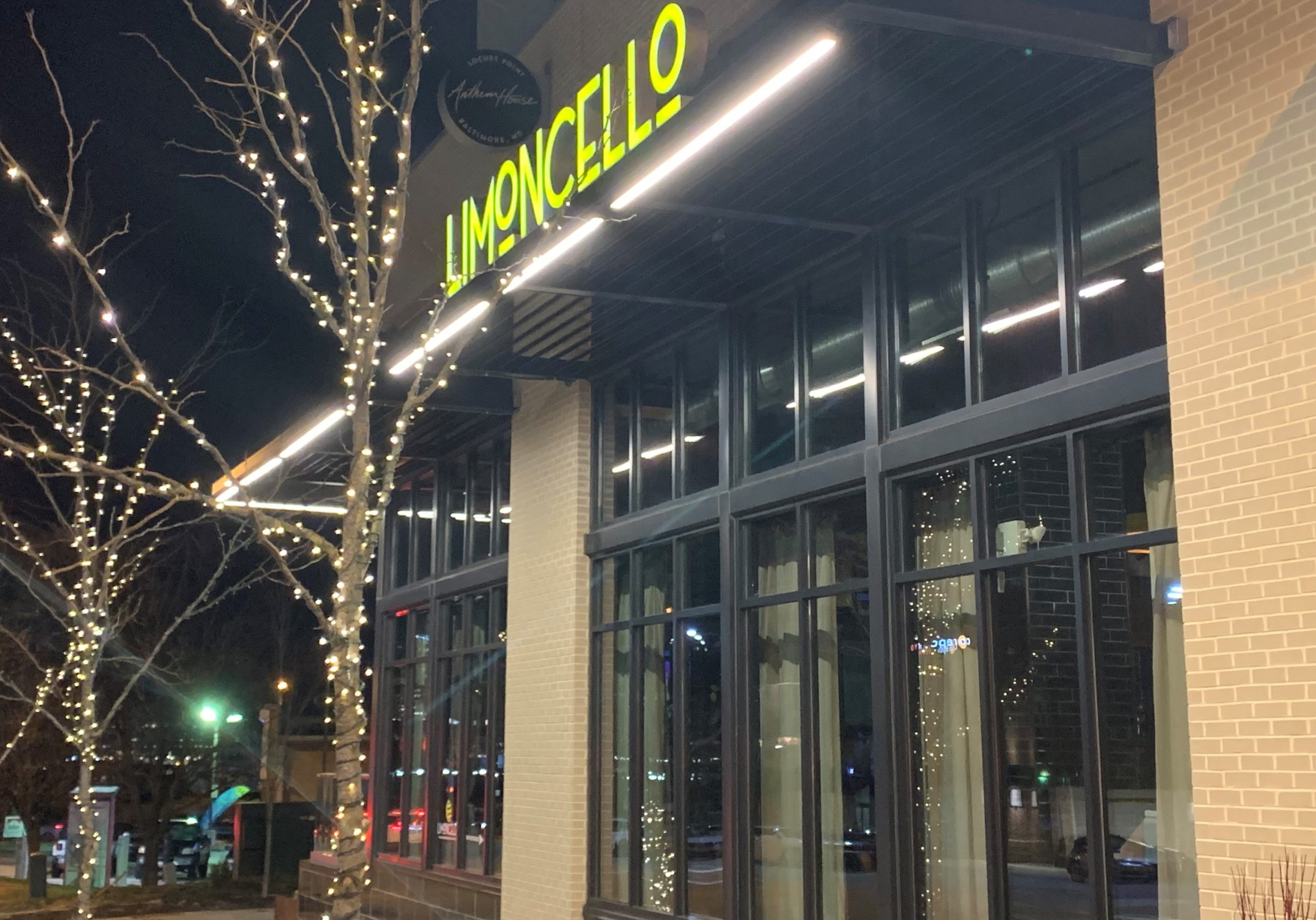 Locust Point newcomer Limoncello might soon be your new favorite restaurant for a special occasion. But if you live nearby, it could become your trusty neighborhood spot, too.

Limoncello opened in late October, on the first floor of Anthem House, one of the new mixed-use buildings that have popped up around South Baltimore over the past few years. Anthem House’s developers call it a “lifestyle community.” In addition to luxury apartments, the building houses a barre/fitness studio and several restaurants.

END_OF_DOCUMENT_TOKEN_TO_BE_REPLACED

Restaurant Review: The Curious Oyster has lots of potential but also needs fine-tuning 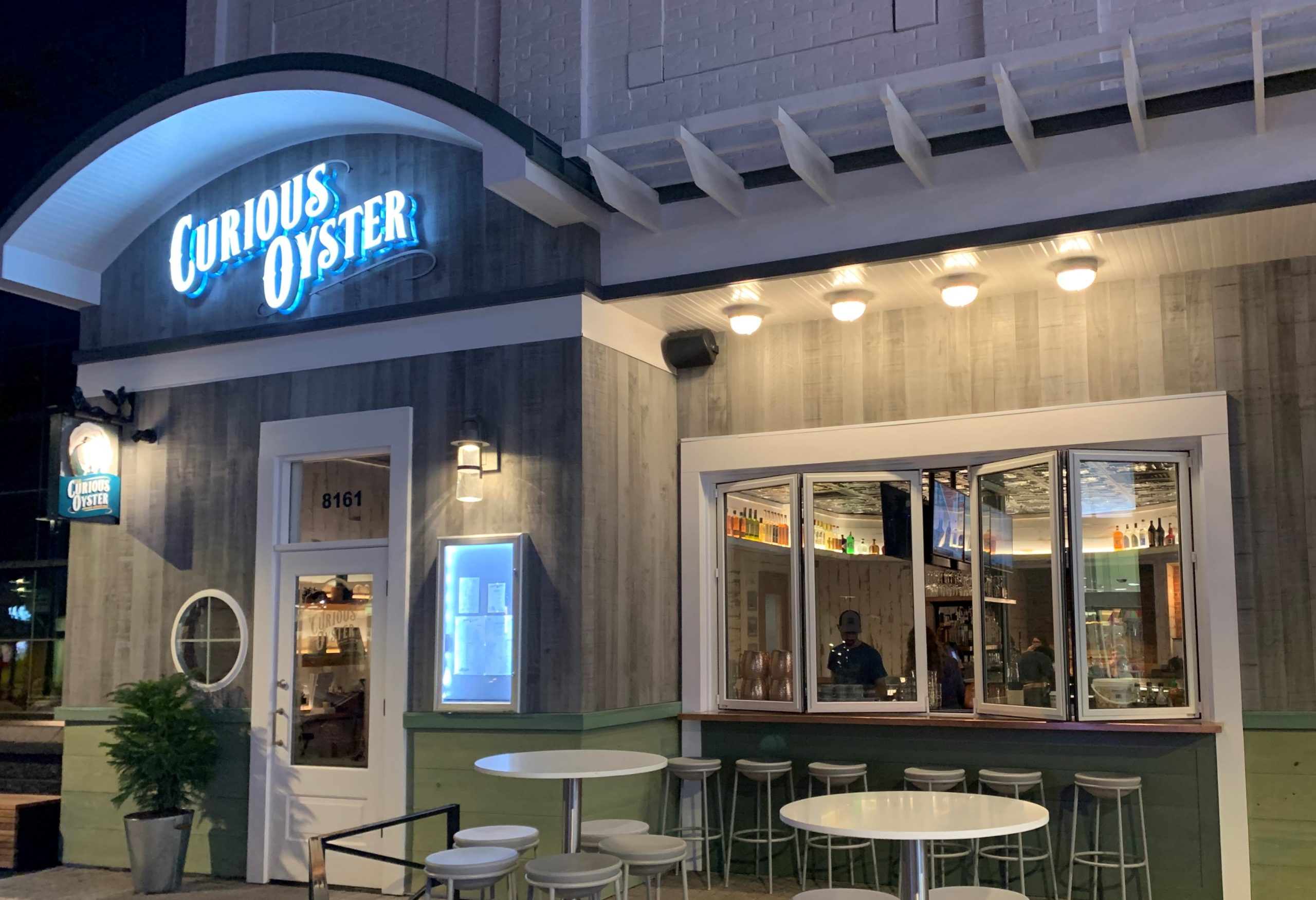 Between the Chesapeake Bay’s newly prolific oyster farms and an uptick in restaurants shining a spotlight on the beautiful bivalve, there’s never been a better time to be an oyster lover in Baltimore.

One of this fall’s most recent additions to the region’s oyster-centric dining scene is The Curious Oyster, which opened in mid-October at The Avenue at White Marsh. During a recent visit, the restaurant presented itself as ripe with potential, but in need of polishing.

END_OF_DOCUMENT_TOKEN_TO_BE_REPLACED 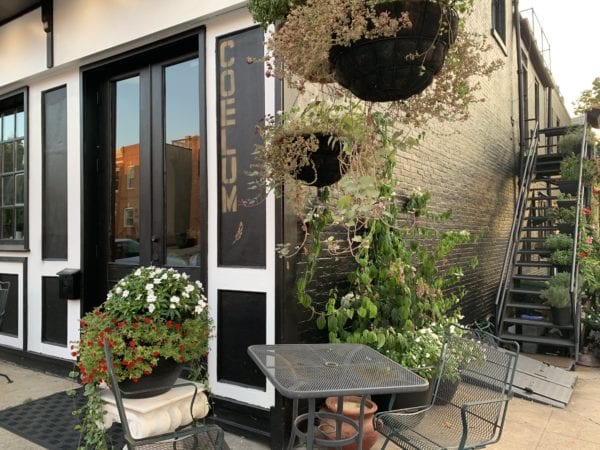 Has the Baltimore restaurant scene woken up from a nap? After a few sluggish years, with more news of closings than openings, the scene is showing signs of life, with high-profile debuts and new, creative menus on the way.

Coelum, which opened last July in the Canton space formerly occupied by Gitan Bistro Cru, is part of that wave. If the next few restaurants that open in Baltimore are even half as good as Coelum, we are in for quite a ride this season.

END_OF_DOCUMENT_TOKEN_TO_BE_REPLACED

Restaurant Review: At The Tilted Row, interesting food and attention to detail create a memorable experience 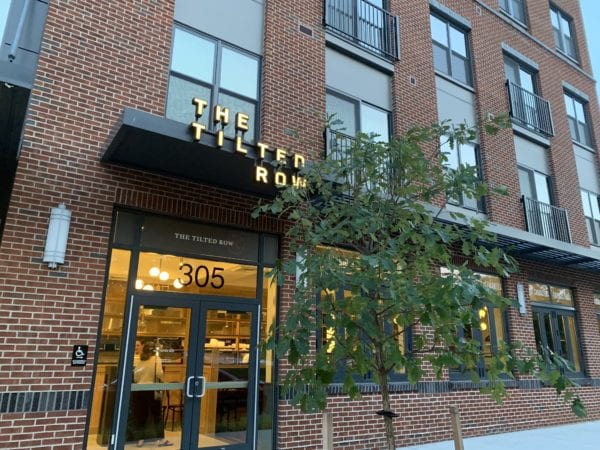 END_OF_DOCUMENT_TOKEN_TO_BE_REPLACED

Restaurant Review: Nepenthe Brewing Co. is worth a visit, despite a few uneven dishes 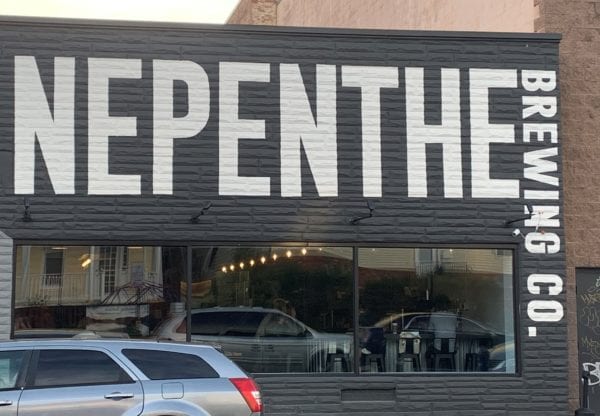 Before I stepped foot inside Nepenthe Brewing Co., I’d already heard a lot about it. I knew it was a new concept for Nepenthe Homebrew, a well-respected shop within the local homebrewing community that moved after a series of floods ravaged its building in the Meadow Mill complex next to the Jones Falls.

I’d also heard, through friends, that the new Nepenthe location was a lot of fun. They were right. During our visit, Nepenthe’s food was uneven, but there was a lot to like about it; the space, drinks and people went a long way towards making up for a few imperfections from the kitchen.

END_OF_DOCUMENT_TOKEN_TO_BE_REPLACED 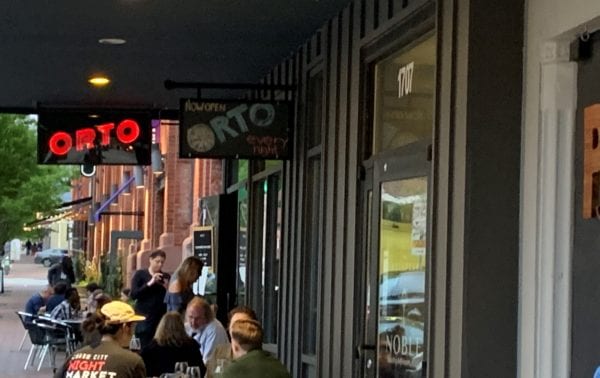 Orto is hot right now, and with good reason.

The Station North restaurant isn’t perfect; during a Saturday night visit about two months after it opened, we experienced some service hiccups. But even with room to improve, Orto is very good.

Orto, which opened in February, is the baby of Elan Kotz, whose previous restaurant experience includes opening The Food Market with Chad Gauss back in 2012. Kotz is a front-of-house and behind-the-scenes guy; Orto’s kitchen is helmed by Chef Stefano Porcile, who has recently cooked at erstwhile Station North favorites Colette and Bottega.

END_OF_DOCUMENT_TOKEN_TO_BE_REPLACED

Family-friendly yet stylish, with a large, varied menu of elevated comfort foods and a lively bar scene, State Fare in downtown Catonsville hits a sweet spot of being broadly pleasing without dumbing down its offerings.

END_OF_DOCUMENT_TOKEN_TO_BE_REPLACED

Restaurant review: The Alexander Brown Restaurant has a strong foundation but needs fine-tuning

The Alexander Brown Restaurant is, without a doubt, one of the best-looking places in Baltimore. The restaurant, which opened downtown in early February in the former home of the Alex. Brown investment house, has the air of a well-maintained museum. The 118-year-old building is full of gorgeous architectural flourishes: high ceilings, marble columns and a showstopper of a stained-glass ceiling.

END_OF_DOCUMENT_TOKEN_TO_BE_REPLACED

Gypsy’s Truckstaurant is as fun as a college party, but with much better food 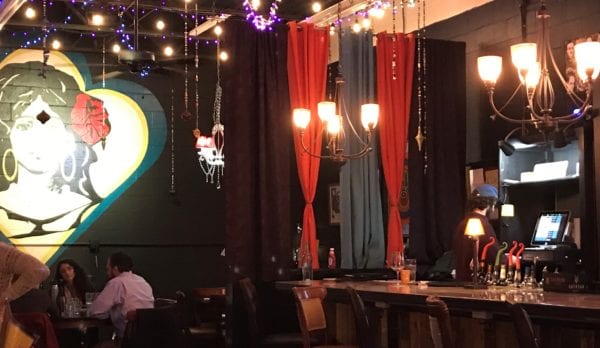 Gypsy’s Truckstaurant is as much fun as a college party, but its menu of global street food is a whole lot better than anything you’d find in an average campus kitchen.

END_OF_DOCUMENT_TOKEN_TO_BE_REPLACED

A few years ago, I interviewed Karin Tiffany, the co-owner of Peter’s Inn, for a feature on restaurant personalities, and we got to talking about what’s important to her as a restaurateur.

She said she never takes her customers for granted, that she and her husband/business partner, Bud Tiffany, recognize that going out to eat is expensive and they take it seriously that people are willing to spend their money on their food, at their restaurant.

“Some things on my menu might cost what people make in an hour. That’s your hard-earned money. It’s a big responsibility.”

That stuck with me, and I thought of it again last year, just after Christmas, when the Fells Point restaurant caught fire. The damage was severe enough that Peter’s Inn, which had at that point been open for over 20 years, was forced to close for nine months to make all the necessary repairs.

END_OF_DOCUMENT_TOKEN_TO_BE_REPLACED

La Calle’s modern take on Mexican food is a winner

It’s been 25 years since salsa overtook ketchup as the most sold condiment in the United States, but Baltimore’s embrace of serious Mexican food is a newer phenomenon. And a phenomenon it is. The recent success of legitimately authentic Mexican spots like Clavel and Cocina Lucahadoras is a heartening development.

END_OF_DOCUMENT_TOKEN_TO_BE_REPLACED

We went to Patterson Public House expecting good wings and probably a solid burger. As it turns out, our expectations were too low.

The restaurant, which opened during the summer in the former home of Bistro Rx, is turning out genuinely sophisticated food–and not just pub fare, either. Plus, the service is five-star stuff. The Patterson Public House team is simply doing things right, all the way around.

END_OF_DOCUMENT_TOKEN_TO_BE_REPLACED 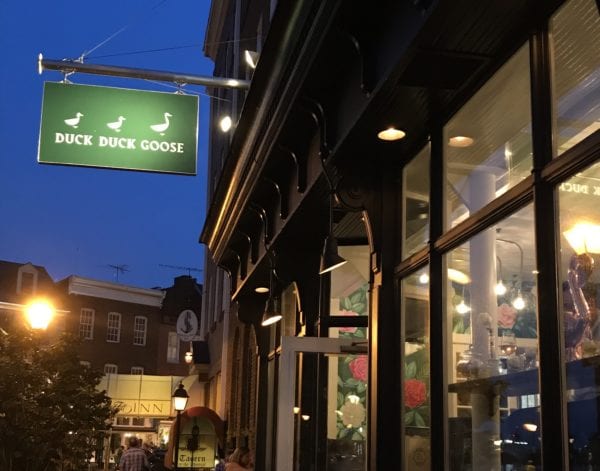 Can fine dining be fun?

Duck Duck Goose, a French brasserie that opened in Fells Point earlier this summer, makes a pretty good case that it’s possible. Though the menu is elegant and the kitchen, helmed by owner and executive chef Ashish Alfred, obviously takes food seriously, the Duck Duck Goose vibe is more festive than reverential–and that is a good thing.