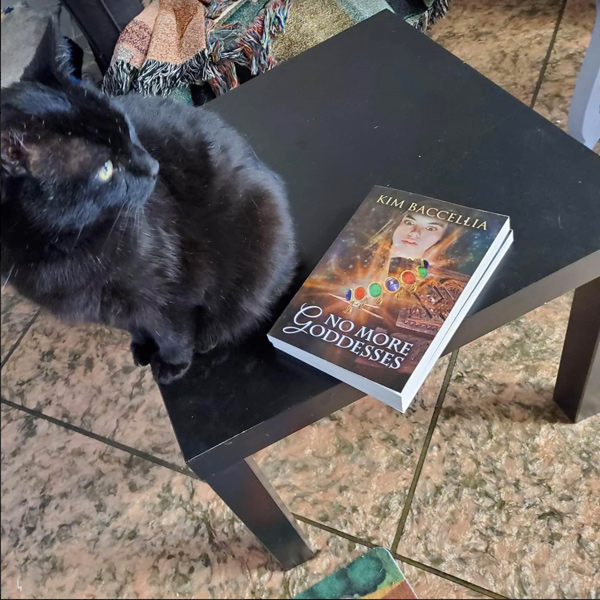 Meowr, We live in interesting times. I’m Stan Lee, the bookstore cat at Carpe Librum. Usually, I would be demanding you pay homage to me in the bookstore, but We must keep you humans healthy.

Felis catus domesticated Homo sapiens not once, but twice. It was a LOT of work, and We don’t want to have to do it again. We’d like to keep you around. So, we are going to need you to stay inside so you don’t get hit by cars, or get worms.

You are going to need to be spayed and keep your mind occupied and there’s no better way to keep your mind active and relaxed through these interesting times than with a good book. I’m going to highly suggest some of the best titles I have absorbed through the power of osmosis.

END_OF_DOCUMENT_TOKEN_TO_BE_REPLACED

Towson Barnes & Noble Closing Due to Proposed Construction in the Area, Executive Says Barnes & Noble didn’t want to close its Towson store, but is leaving due to forces beyond its control, according to a corporate executive in New York.

END_OF_DOCUMENT_TOKEN_TO_BE_REPLACED

Barnes & Noble is Closing in Towson After Borders Books and Music closed on York Road and Ukazoo Books moved out of Dulaney Plaza, Barnes & Noble was the only large book store left in the heart of Towson. Soon, it will be gone, too.

END_OF_DOCUMENT_TOKEN_TO_BE_REPLACED Ukazoo Books has a new home, which means the moving sale that turned into a closing sale is back to being a moving sale.

END_OF_DOCUMENT_TOKEN_TO_BE_REPLACED

Facing Competition from Amazon, Ukazoo Books is Moving from Towson to Parkville

The Towson area is losing another book store. A decade after Borders moved out of Towson Commons and Greetings & Readings left Loch Raven Plaza, Ukazoo Books disclosed this week it is leaving the Dulaney Valley Shopping Center and moving to a smaller space in Parkville.

END_OF_DOCUMENT_TOKEN_TO_BE_REPLACED

There’s Something Wrong with This Baltimore Travel Guide…

So the Huffington Post has written yet another travel guide to Baltimore. This happens periodically, and usually the stories are kind of meh-but-whatever. This one, though, had promise. It was allegedly A Baltimore Travel Guide for Book-Lovers. And since we love books, we thought: Great!

END_OF_DOCUMENT_TOKEN_TO_BE_REPLACED Sad news:  Yet another Baltimore bookstore will be shutting its doors as of later this month. The Book Escape‘s Calvert Street branch, which sells both used, rare, and new books, opened three years ago as an addition to its Federal Hill location. (That branch is staying open.) But since no one except me apparently likes to buy books in person anymore, sales weren’t strong enough to keep the second store going, and it’ll be officially closing on March 28.

END_OF_DOCUMENT_TOKEN_TO_BE_REPLACED

Week in Review: Most Popular Stories in the Baltimore Fishbowl this Week

Here’s what you read the most this week:

Bohemian Rhapsody: What if You Were Right? by Marion Winik

How Much Do You Need to Earn Just Get By in Baltimore? by Rachel Monroe

Hot House: Timeless Not Traditional in Homeland by Cynthia McIntyre

It’s a harsh world out there for bookstores, especially the quirky, independent kind. Still, somehow we thought that Salamander Books, the beloved Mt. Vernon purveyor of used books and home to friendly discussion groups, would be around forever. But the Kindle/Amazon/e-commerce world took its toll, and the bookstore will be closing its doors as soon as it sells off its inventory.

END_OF_DOCUMENT_TOKEN_TO_BE_REPLACED

… but less literate than DC. That is, according to the newly-released data from America´s Most Literate Cities, an annual report that ranks metro areas based on indicators like number of bookstores, newspaper circulation, and educational attainment.

For the second year in a row, DC topped the list, followed by Seattle, Minneapolis, Atlanta, and Boston. Baltimore was 18th this year (same as last), beating out not only Honolulu but also New York City, Los Angeles, and San Francisco. So there!

Baltimore ranked highest in our number of bookstores (15th) and publications (13th), but we´re not too shabby in the other categories, either.

However, as GOOD magazine points out, literary-ness doesn´t seem to correlate with money, at least according to this study. The most literate cities aren´t the wealthiest. But, as GOOD notes, a city´s committment to literacy can be one way to help close the poverty gap.