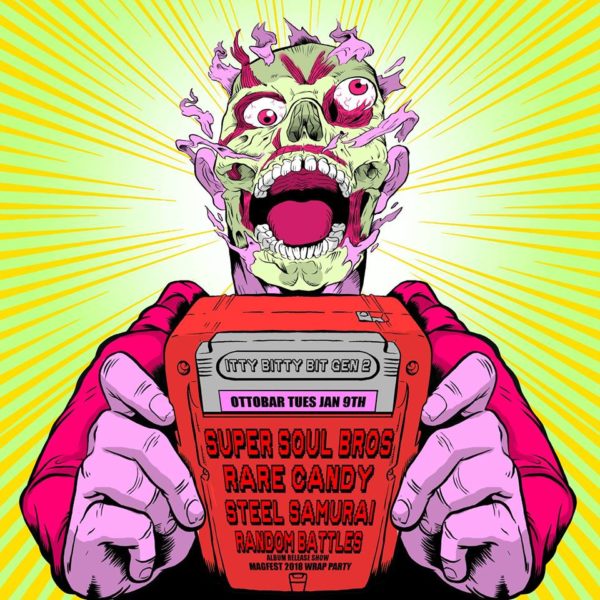 Fresh off the video game convention MAG Fest at National Harbor, Bit Gen Gamer Fest is coming to Ottobar in itty bitty form for a night of video game music that promises to warm you up “like an overheating PS2.”

END_OF_DOCUMENT_TOKEN_TO_BE_REPLACED

It’s a rare, special moment, John DeCampos explains: You’re immersed in a classic arcade game, drinking a nice, cold craft beer, when a live band across the room starts playing a high-energy, spot-on cover of a tune from the very game that’s captivated you.

END_OF_DOCUMENT_TOKEN_TO_BE_REPLACED As Baltimore writer Christine Grillo weighed whether to indulge her son’s passion for violent video games, she and her husband entered new levels of parental danger.

“But all my friends are playing them,” said my son.

Then he went on to explain, in actual tears, that he was being left behind and left out. In so many words, we, his parents, were depriving him of critical adolescent alliances in this tender developmental age when being part of the herd is much, much more important than, say, orthodontic hygiene or hanging up a towel after a shower. We were ruining his friendships and, therefore, his life.

The object of his desire? First-person-shooter games. For the uninitiated, first-person-shooter, or FPS, games are video games that allow the player — my 12-year-old son — to engage in close-range combat through the eyes of a buff protagonist, usually an American military squad leader. These games have names like “Call of Duty” (think there are any jokes about that one?) and “Gears of War,” and they feature firefights, sniper weapons, melee weapons, garroting, blood, and sometimes logic puzzles. The graphics can be stunning.

He begged for permission to play them.

And for the usual kumbaya reasons, we weren’t keen on this. We had notions: (1) The military industrial complex uses FPS games to train its soldiers. (2) FPS games minimize the lives lost in combat in real life (IRL). (3) FPS games will desensitize my son to violence IRL. (4) FPS games are a recruiting tool for the military. (5) Our son’s friends’ parents will hate us if we allow him to play FPS games — we’ll be ruining it for everybody.

But we entered into negotiations. Due diligence compelled us to canvass the parents of these friends, all boys, who played garden-variety video games and who, according to my son, were allowed to play FPS games, too. The parents’ comments were nearly unanimous: (1) The boy becomes a bona fide dope when he’s on the screen, regardless of whether that screen is a computer, a television, a handheld device, or something else. (2) The boy is bothering us about playing FPS games, too, and we don’t like them. (3) We want to pile up all the screens in the house and smash them with a sledgehammer. (4) We should take him camping more often. One of them said, “I feel like showing him the WikiLeaks video of the guy in the helicopter slaying innocent Iraqi citizens.” More on that later.