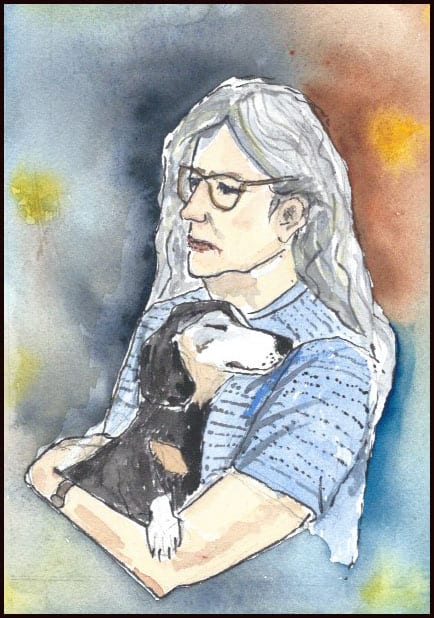 We didn’t realize how many things would expire in 2020, did we? Where were the tiny numerals stamped on the restaurants, the stores, the jobs, the knees, the relationships?

I have repeated the insane nicknames above so often they seem like actual words to me, and only when I try to spell them do I realize how far over the linguistic edge I have gone. (Speaking of silly names, didn’t it used to be called the Aardmore “Veterinarium”? I pictured dogs paddling around the squat brick building like furry four-legged fish, a few aardvarks in there, too.)

Beau had been a very old dog for a very long time. Years ago almost all the tan in his black-and-tan coat had turned white — we matched in this way. His eyes were cloudy with cataracts; a vet told me in 2018 he probably couldn’t see much of anything anymore, though you couldn’t tell by the way he got around the house and yard. How well he could hear was open to debate since he had never paid any attention to verbal commands. (This recently inspired my daughter Jane to claim that Beau was ‘not a good dog.’ Oh, Jane. You infidel.)

One of his back legs never worked right: he had always had a rolling, lopsided gait. By last summer, things had gotten to the point that before our annual two weeks at Dewey Beach, I bought the dog equivalent of a Baby Bjorn. We loved that thing.

I had planned a fall trip to Dewey Beach, “our place,” to celebrate Beau’s 16th birthday this month. Now I will go without him. I can’t imagine it. Jane is coming, my sweet sons are showing up from afar and Hayes will bring his one-year-old dachshund, but like everything else in my life right now, the beach will have a hole in it, a hole the shape of my constant companion.

It was at the beach one summer that I had an argument with a friend about dragging Beau around with me everywhere, letting him lick my face and eat from my fork at the dinner table. She said my relationship with Beau was — I’m trying to remember her exact word — unhealthy? abnormal? perverted? I’m pretty sure it was perverted.

Believe me, I did not care. Beau was the sweetest and most loyal of my husbands and lasted the longest.

How does this happen? How does a person become so attached to a creature from another species? Maybe we are simply reflecting the quality of their attachment to us, their wordless trust, their unconditional love. The deeper and stronger the bond, the greater the fear that goes along with it. My next-door neighbor told me that she loved her mini-pin so much, she whispered every day into his neck, “Don’t leave me, promise you won’t leave me.”

I knew the fear very well, but at the same time I was in denial. Beau had been so old for so long, and seemed so perfectly happy about it (an old dog whose people are in lockdown — an old dog schlepped down to the creek every day in a dog sling — an old dog eating enchiladas and pistachio nuts) I was lulled into feeling safe.

Some years back I saw on the internet that a skeletal dachshund named Rocky had lived to be 25. I repeated this comforting factoid a couple million times, imagining we might break the record. But it was not to be. As I see it now, Beau waited for me to have my knee operation in July, lay beside me on the couch for eight weeks of recovery, and though he surely would have stayed forever if he could, like an old tradesman who would never retire if someone didn’t take his truck away, they took his truck away. 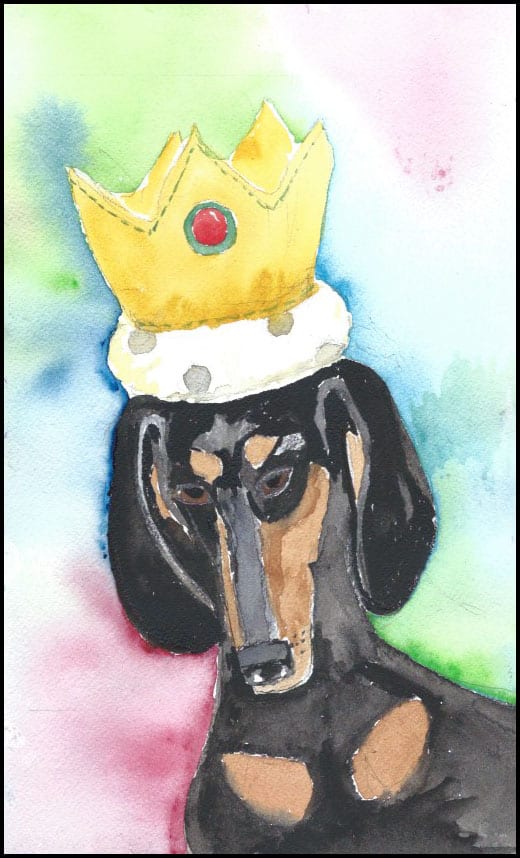 As little as a week before Beau died, I still thought everything was fine. I mean, he had been on heart medication for years, more recently I had wiped up a few puddles of pee, and he sometimes slept so long and deeply I looked to see if his chest was moving, but I had no inkling how little time we had left. What may have been a symptom of his illness I took for a normal sign of old age. Gradually, over a long while, he had gotten pickier about eating, often leaving his kibble in the bowl, so when he got even pickier, I thought it was more of the same. I tried letting him share the cat’s food, I bought fancier and fancier dog food — freeze-dried “Surf and Turf,” “Wild Weenies,” “Little Lamb Bites” — and finally I just offered people food instead.

Until the last week of his life, he would at least think about sharing anything I was putting in my mouth. He would look up, reflexively, as if to ask for a bite, but when I presented it, he turned away. No brie? No smoked salmon? What? The week before he died he only took one lick from a dish of vanilla ice cream. I should have known then. I’m afraid he had the intestinal infection that killed him for much longer than a week.

And I worry that the little “pond” in my backyard, actually just a shallow ditch lined in heavy black plastic and surrounded by rocks, which he laboriously clambered into several times a day and drank from — a real obsession in his last months — was the cause.

If I had figured any of this out, if I had realized he was not just old but sick, I would have taken him to the vet earlier, and perhaps they would have tried to save him. He would have stayed overnight — he had only once slept overnight in a kennel — he would have had IV fluids and other treatments, and he would have died anyway, according to the vet at the veterinarium that miserable Friday. His heart was way, way out of warranty; the vet could barely hear it. As it was, we had those last three days together, days and nights, because he couldn’t sleep, and I couldn’t either. By the time we went to the vet, I pretty much knew it was over. He looked just like Rocky.

The last food he ate was a few bites of cut-up rotisserie chicken, warm from the Giant, bought just for him. I was so thrilled, I took a picture. That was Tuesday. He did not take another bite of food or sip of water. I tried to wet his mouth. And of course there were accidents. I changed the bedsheets a couple of times. Thursday night we slept on the floor, on towels.

Beau was peaceful that Friday morning, resting against my chest. It was the first and only time we ever pulled into the parking lot of the vet that he didn’t react with horror, squirming and paddling his big paws like a duck trying to swim backwards. If he even knew where we were, he did not protest. Jane was driving. She had insisted on coming with me since she, if not I, was sure about what would happen when we got there. She took the last pictures of us. Despite all the sibling rivalry, she loved him too. (Having just read the previous sentence, Jane wonders how Beau could have been both my husband and my son. All part of the perversion, I guess.)

I always thought that after Beau died, I would not get another dog. I would apply to Yaddo and MacDowell and all the writers’ colonies that don’t allow pets, and I would visit Thailand and Vietnam, I’d do all the things I haven’t done due to motherhood and dog motherhood the past 35 years. Now I find I don’t care about writers’ colonies anymore: my house is a writer’s colony. No one will be going to Southeast Asia, at least for a while. And though my sister suggested that the hole in my life could possibly fit a person, I’m pretty sure I would rather have a puppy than a boyfriend.

A couple years ago, I started a project of interviewing my neighbors about their pets. After listening to several people narrate the epic saga of their generations of Australian shepherds or labs or mini-pins or rescue mutts, I realized I had been seeking, and getting, lessons in loss. In how much it hurts, and how you get through it. In every story of many dogs, some great, some not as great, there was always a dog that was the greatest by far — the dog who was The One.

I just had mine.

My quarantine hobby has been writing formal poems: a sestina, a glose, now a pantoum. The pantoum is a form from Malaysia with an interlocking chain of repeated lines and rhymes; lines 2 and 4 from each quatrain become 1 and 3 in the next, and the rhyme is ABAB. This probably sounds a lot easier than it is. The best examples I found contained some cheating on those repetitions, so I cheated a little too.

A Pantoum for Beau

You were always here and I was always here,
and if I went away, you went with me.
You never learned to sit but you had your own tricks —
Whatever bad thing happened, you could fix me.

If I went away, and you were rudely forced to stay,
nothing moved you from your spot by the door.
Whatever bad thing happened, you knew right away;
would lick my face, my feet, my cut — then lick some more.

Now the hardest thing is coming in that door.
Also bad: the couch, the yard, the bed.
I drink and read alone, then drink some more.
Even sleep is sad; I wake half-dead.

Who will clean my plate, share my shrimp, my sauce, my bread?
People say you’re with Ruth Bader Ginsburg doing fine.
But your treats are here, your beaded leash, your cozy dachshund bed —
Ruth, give him back. He is mine.

You’re with E.B. White and Elizabeth Bishop doing fine,
velvet ears, colossal paws, long pink tongue.
We took our pills each morning and went to bed at nine.
It has been a long time since we were young.

Your worried eyes, big black nose, tireless tongue.
For every visitor, so much wagging, so much joy!
How you bounded, ears flying, through the grass when you were young.
I was chopped liver if we had a visitor, fickle boy.

A sixteen-year conspiracy of joy,
a thousand names, made-up words and silly songs.
I still sing them all. Oh my good boy—
How can it be that I am here and you are gone?