When we talked with Baltimore comedian Ivan Martin in April, he was busy putting together an opportunity for the city’s comics to shine on one of Kevin Hart’s cable-televised showcases. At the time, Martin said part of the reason he thought Hart would even bother stopping through Baltimore was the growth he’d seen in Baltimore’s standup scene over the last decade or so: “When it comes to downtown Baltimore and Station North and Mount Vernon, you can get on stage every single night now.”

Martin has helped make that a reality as an organizer of events showcasing fellow local comics. One of his biggest undertakings has been the city’s very own comedy festival. Now in its second year, the weekend-long event features a host of standup shows across the city.

END_OF_DOCUMENT_TOKEN_TO_BE_REPLACED

Dave Chappelle is coming to the Lyric this June 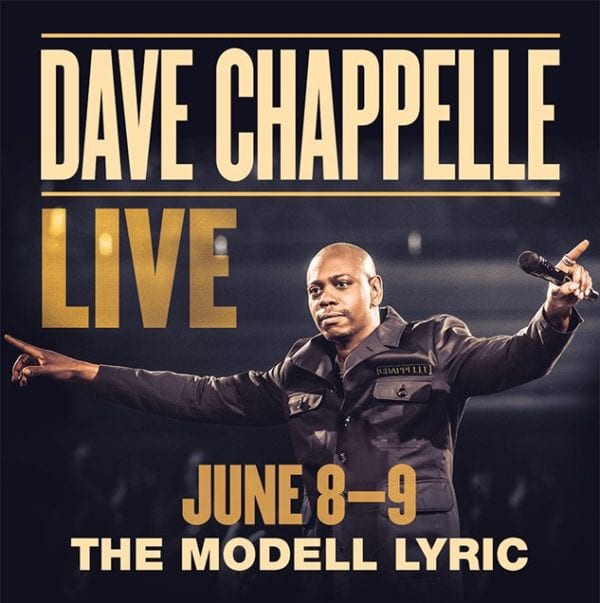 The legendary comedian Dave Chappelle has been firing on all cylinders since last year, releasing four stand-up specials on Netflix and, earlier this month, announcing a co-headlining tour with former “Daily Show” host Jon Stewart, from June 11 to June 24.

END_OF_DOCUMENT_TOKEN_TO_BE_REPLACED

The last six months have been kind to the Baltimore Improv Group. The nonprofit comedy organization has settled into its newly renovated home in Station North, seen upticks in attendance at shows and a steady stream of revenue from paid classes and workshops, and even earned a “Best of Baltimore” nod from the readers of the city’s paper of record.

END_OF_DOCUMENT_TOKEN_TO_BE_REPLACED

Nearly 30 local comics will get a shot at some national shine this month when celebrity comedian Kevin Hart’s Comedy Central show “Hart of the City” stops by Motor House to film an episode all about Baltimore.

END_OF_DOCUMENT_TOKEN_TO_BE_REPLACED

The BIG Theater should be in tip-top shape very soon, thanks to a successful online fundraising campaign.

END_OF_DOCUMENT_TOKEN_TO_BE_REPLACED

Popular ‘I MOM SO HARD’ Moms Coming to Baltimore July 15

“You can’t get through this without friends.”

That’s the core message delivered by Los Angeles, California moms Kristin Hensley and Jen Smedley in their online video series, called “I MOM SO HARD,” and their live show, which comes to the Lyric next Saturday.

END_OF_DOCUMENT_TOKEN_TO_BE_REPLACED

Sorry, Baltimore. One potential for laughs scheduled for this weekend isn’t happening.

END_OF_DOCUMENT_TOKEN_TO_BE_REPLACED

When the Emmy nominations were announced yesterday, comedian Amy Schumer had reason to celebrate: She was nominated in the “outstanding lead actress in a comedy series” category. And she chose to celebrate in true Baltimore style–with a six-pack of Resurrection Ale from Brewer’s Art, of course.

END_OF_DOCUMENT_TOKEN_TO_BE_REPLACED If you’re in the mood for a few good laughs (and we mean really good ones), save this Saturday and hit the Ottobar for a free evening of fantastic standup. Mike Quindlen is an amazingly funny guy who’s put together a monthly comedy night that will knock your socks off. The show starts early– doors are at 7pm, and comedy starts at 7:30.  There are also drink specials all night on beers from Monument City Brewing Company. It’s a great way to kick off your Saturday night– you’ll surely be chuckling to yourself long after the show is over.

END_OF_DOCUMENT_TOKEN_TO_BE_REPLACED

Lily Tomlin at Night of the Stars We’ve got some pretty amazing local talent here in Baltimore, and on the whole, it’s enough to keep us satisfied all year round. Our homegrown music, theater, comedy and art have gained national recognition in recent years– and for good reason. But we’re also lucky enough to be a destination for performers and artists of international renown– and every so often, it’s an act that we’d camp out overnight to get tickets to. Such is Lily Tomlin— the pioneering comedian and actor who Newsweek says “made the one-person show the daring, irreverent art form it is today.” She’s all that and more, and she’ll be in town for one night only– so do not miss your chance.