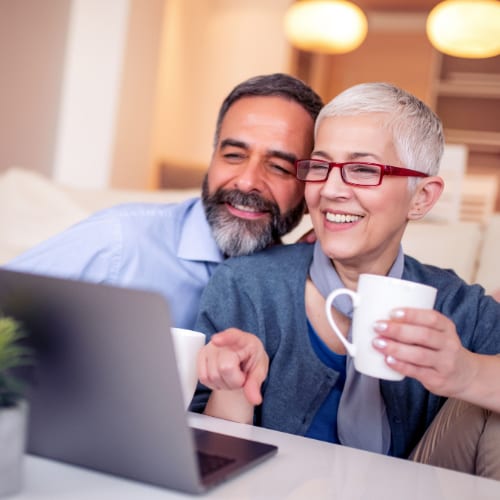 By Helene Cooper, LCSW-C
Therapist with Jewish Community Services, an agency of The Associated

Falling in love is easy, and certainly one of the most beautiful and exciting experiences of our lives. We’ve seen the Disney movies, read the fairytales, and pretty much absorbed the cultural construct of some version of meeting our “soulmate,” falling in love, getting married, with the expectation that they will live “happily ever after.”

So, how do we cope when our relationship reality doesn’t match what we’ve been taught to expect? Or, suddenly includes stressors we never anticipated like a pandemic?

Expectations can be the undoing of even the best love matches, the ones where everything is “in sync” – attraction, mutual respect, shared values, supportive families, compatibility and the wonderful spark of “chemistry.” The falling in love part of a loving relationship is only the beginning.

Keeping love alive requires the intention to hold on to what we’ve found, with some degree of vigilance, including self-awareness, compassion and tolerance for the person we love, and honest communication of our own vulnerabilities and needs. No matter how long you have been with the person you love or how much that person loves you, love does not give your partner the ability to read your mind.

END_OF_DOCUMENT_TOKEN_TO_BE_REPLACED

Where tragedy strikes, love oftentimes pours out to sustain a grieving community. In Orlando, a muralist known for his work around Baltimore is bringing that love in a literal way to a wall across from Pulse nightclub, where 49 people were killed and 53 wounded on June 12 in our country’s worst-ever modern mass shooting.

END_OF_DOCUMENT_TOKEN_TO_BE_REPLACED

Washington, D.C. Is the Nation’s Most Loveless City

Not that we have any interest in starting up another Baltimore-DC feud. But… well, it’s interesting, isn’t it, that our nation’s capital was recently named the country’s most loveless city?

END_OF_DOCUMENT_TOKEN_TO_BE_REPLACED I think my favorite season in Baltimore is “Otakon.” The city becomes alive with people in rainbow wigs, carrying spears, living their fullest lives. When it’s Otakon time, I could just sit around the Inner Harbor and people watch all day.

But perhaps even better than Otakon people watching is post-Otakon missed connections reading. It’s always amusing to scan the Missed Connections section of Craigslist to see who’s catching eyes around town; that activity is made all the more entertaining when you add in costumes and intense fandom. Here’s a sampling from this year:

END_OF_DOCUMENT_TOKEN_TO_BE_REPLACED

For many years I was a freelancer for Brides magazine, writing up weddings at the Museum of Natural History, at exclusive resorts in Cabo San Lucas, on cruise ships in New York Harbor, with bridesmaids in Todd Oldham or Vera Wang and flowers that might have come from the court of the Sun King. These weddings had theme colors and signature cocktails and bridesmaid favors and complex gift registries, the full monty of goofy traditions we heterosexuals have invented to go along with the legal and emotional essentials, and all were thoroughly documented in my accounts.

END_OF_DOCUMENT_TOKEN_TO_BE_REPLACED

There is no music I can listen to

That does not have an overtone of you.

No Crosby, Stills, and Nash. No Billy Joel.

The presets on the stations: maybe Jazz

Will be my new life’s soundtrack, post-divorce?

END_OF_DOCUMENT_TOKEN_TO_BE_REPLACED

Just one more day to submit your love story for the chance to win dinner for two at Pazo and a bottle of Roederer Estate “Special Cuvée” Brut NV from Bin 604 in our “How I Met My Honey” contest! Read the moving story, below, about a courageous cancer survivor finding true love when she least expected it.

Love at the Cat’s Eye Pub

I had a better chance of being struck by lightning or being attacked by terrorists than I did of meeting a guy in 2010. I was a divorced, middle-aged woman who was bald and missing a body part that made my sweaters look decidedly uneven. Thank you, mastectomy and chemo.

I was also puffy. My oncologist even admonished me about the weight gain. But it was a side effect of my job, not the drugs. I have to eat a lot as the food editor for Baltimore magazine.

But, amazingly, I did connect with someone that year in a most unlikely place—a Fells Point dive bar. My friends convinced me that listening to the afternoon blues bands on Saturdays at the Cat’s Eye Pub would lift my spirits. It was worth a try.

It did help distract me until that summer when I went through another surgery for reconstruction. Trust me. We’re not talking body beautiful. We’re talking just feeling whole again.

Soon, I was back at the Cat’s Eye. This time, looking like a deranged poodle as my hair grew out in a weird corkscrew style. People were polite about it. I tried to ignore my new look.

That was when I met the bass player for the band Nothin’ But Trouble. He was from Delaware. I used to live in Delaware.

We soon became Greg from Magnolia and Suzanne, formerly from Old New Castle. It was a greeting we shared with a smile during the band’s once-a-month gigs. But we were ships passing in the night. He had someone in his life. I was still trying to recover.

One evening, much later, fate intervened. We ended up sitting next to each other at the bar before the band played. The reporter in me kicked in: “So what’s your story?” I asked.

And he told me. He wasn’t just a musician. He was a special-ed teacher, a dad, a son, a brother, and a really fascinating guy. And he was unattached.

END_OF_DOCUMENT_TOKEN_TO_BE_REPLACED

Cautiously Moving Toward Moving-In Together

So, here’s the situation I hope you can help me with. My boyfriend, “Damien” wants us to move in together. We are in our mid 20s and have been dating for less than a year. He makes me laugh, thinks about my feelings, and I love him. At this point in our lives, moving in together makes practical and financial sense since we spend nearly every night together at my place anyway.

I’m concerned a little because he’s not very good with money (student loans, credit card debt). So I am wondering if the primary motivation for him is mostly monetary, even though I don’t doubt that he loves me by the way we feel about each other. Since I am pretty good at managing money, I think that I could help him get his finances in order if we shared a place.

He lives with a bunch of guys who don’t really take care of the place and it makes him feel that he’s not really an adult in that kind of living situation.  Our lives would be much more organized if we lived together.  Moving in together seems like a good way to find out whether we really have a future together, which I think we do. What do you think?

Up for Moving In Together

Except for your declaration of love, you’ve described some circumstances that apply to a possible roommate rather than a live-in boyfriend. As a former banker, I always reflexively imagine the worst-case scenario first, especially when someone is described as “not very good with money.”  So, caveat empty (beware of boyfriends with nothing in their wallets).

Even though I know that anticipating a new living arrangement is exciting with someone about whom you can say, “I love him”, I want to ask you to do something:  Try to consider rationally what your future could be like while you still have the freedom to say no to a life that hand-cuffs you as a kind of  “passion’s slave” to someone who can’t master his Mastercard.  Of course you’ll say that the worst case couldn’t possibly apply to you and your cynosure Damien, but let’s try it out just to make sure that you aren’t missing something through your rosey-scenario glasses.

END_OF_DOCUMENT_TOKEN_TO_BE_REPLACED

When Too Much of a Good Thing Becomes a Bad Thing

I hope you can help me with this because I am really confused. My boyfriend and I have been dating for about a year, and lately all he seems interested in doing is having sex.

When we were first together, we did that a lot, but we also went out more—to parties, movies, dinner, concerts, etc. Now we seem to spend most of our time together at my place. Occasionally we hang out with friends, but always go home and have sex. It’s not that I don’t like it, it’s more that I feel that he doesn’t like to do much of anything except that.

When I say I’d really like to do something else, he gets playful and physical—kind of like wrestling, or he’ll start tickling me.  Once I begin laughing, he sees it as some kind of giving in, I guess, because he starts initiating sex.

Sometimes, I wish I didn’t given in and wish we’d gone out with friends. Afterward, I don’t feel good about it, but I don’t know how to go about making it better.

You don’t say why you are with this guy or what attracted you to him in the first place.  My guess is that it was physical and circumstantial. By that I mean that you and he were ready to meet someone and that  you each looked good to each other.

Now you have reached the point where the flush of new love has worn off (or down), and all that is keeping you together is the rush of old lust (for him).  And rather than liking you, what he seems to like is having sex with you.  You might not have consciously admitted this reality, but I suspect that you suspect it. Sex can make you (and just about everyone) feel that all’s right with the world when actually it’s just covering up what is wrong.